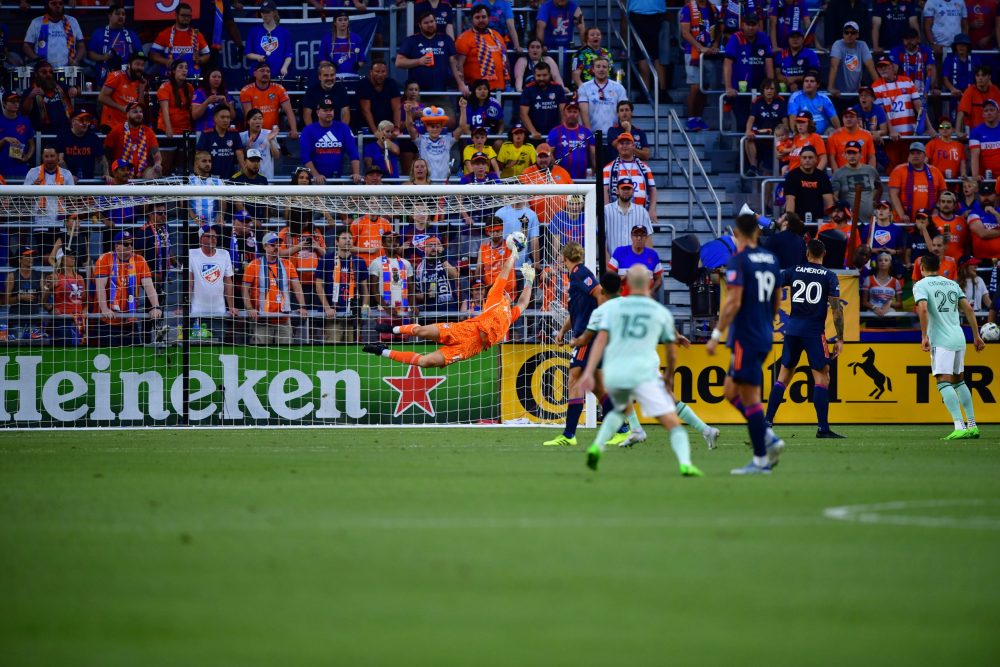 FCC only picks up one point which drops them to 9th place.

FC Cincinnati once again blew another chance to get three points, as the team played to a draw against Atlanta United FC thanks to a goal from former FCC player Andrew Gutman.

The match started with Atlanta controlling much of the match. The opposition did a great job coming out of the gate and putting FCC on the backfoot. Atlanta was very good at passing in transition and bringing the ball into the final third.

Much of the beginning of the match stayed this way, including a fourth-minute look at a possible handball from Matt Miazga. However, VAR never decided to take a look at the play.

Atlanta’s dominant possession continued with multiple rockets on goal, but they all seemed to hit the woodwork.

However, as soon as FCC got more into the match, Atlanta struck first to take the lead. FCC appeared to be allowing Atlanta to control the outer edge of the box. That came back to bite them, as Thiago Almada received the ball at the top of the box and hit a rocket that Celentano had no chance of saving.

Following the goal, FCC really started to ramp up the pressure, working towards an equalizer. FCC’s pressure on the Atlanta defense seemed to be disjointed at points, but the team’s strike partnership was beginning to get better.

This ramp-up in pressure ballooned until the 29th minute when FCC was able to break through and land the equalizing goal. The attack lost the ball in the final third but was able to win it back, Obinna Nwobodo picked up the ball and then played it to Brandon Vazquez who slotted it into the net for his 15th of the season.

FCC didn’t stop its attack with this equalizer and continued to search for the go-ahead goal. Atlanta did see some of the ball, but FCC really was the aggressor in this stretch of the match.

The aggressiveness compounded until the 42nd minute. FCC had a corner kick that was sent over the entire congregation of players in the box, which allowed Geoff Cameron to get to the ball. Cameron hit it back into the middle, where Brenner put a head on the ball which hit an Atlanta player and bounced into the goal.

This goal was given to Brenner, presumably because it would have been a goal even if there wasn’t a deflection.

After the goal, Atlanta started to put more pressure on FCC’s backline but didn’t have enough time to do anything with it.

The second half started in the opposite fashion, with FCC immediately coming out aggressive and nearly netting a goal. The following section of the match saw both sides control the ball somewhat and get some chances, with Atlanta growing into the game.

FCC, however, was the first team to flinch, as Gutman received the ball and tapped it in for that goal. But, shouts for a possible offside call on him. But, VAR never decided to send the center ref to get a second look at it, and the goal was allowed. Just a reminder, that Gutman’s arm and hands would be allowed to be offside but his shoulders, feet, or head would not be.

Immediately after the goal, FCC looked as if it would get the game-winner their best chance from Acosta’s shot that hit the post, but a couple of minutes after that, their chances basically dwindled to none. Atlanta had multiple chances to get that game-winner, but thankfully for FCC, that never came, and the match ended.

Coach Noonan felt the result was fair saying, “An unfortunate trend in the end and conceding the goal to drop a couple points. It was probably fair when you look at the way that game played out. Credit to Atlanta. They put us under a lot of pressure, certainly in the first half when we were careless with the ball. Some dangerous players that have the ability to attack 1v1 to get in the box. I thought we asked a lot of our defenders and Roman (Celentano) with too many of those moments where our lack of composure and just being careless on the ball didn’t allow us to really move forward as a group in a more connected way. The game was open at times, which is good on one end because it allowed us some space to attack them. But on the other side, there’s too much quality on their side with their team to be defending like that. Probably a fair result based on how we performed.”