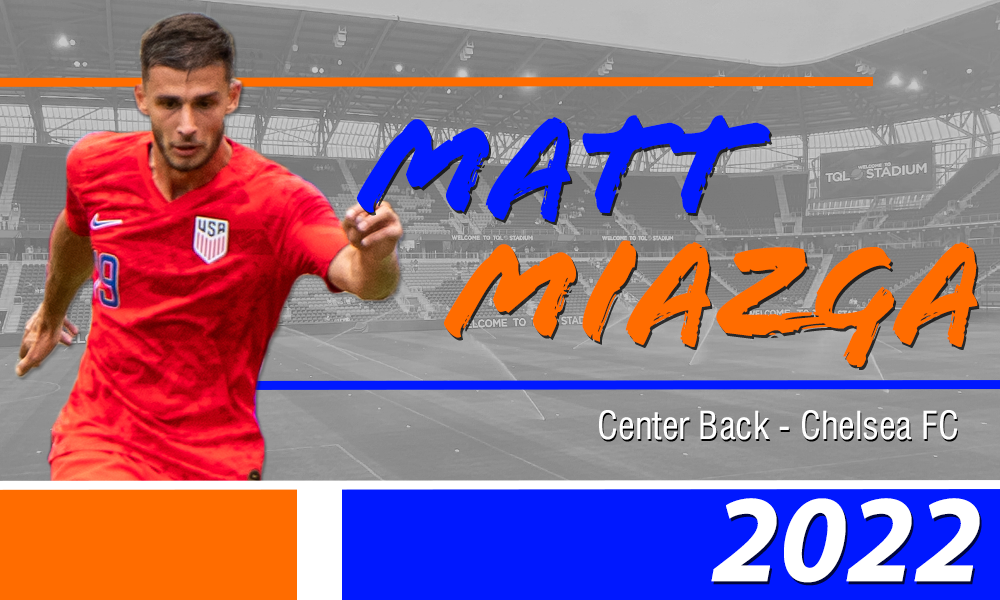 FC Cincinnati general manager Chris Albright pulled off a shock move before the end of the FIFA summer transfer window Thursday night by adding center back Matt Miazga. The defender moves to the orange and blue from English Premier League club Chelsea FC via a Free Transfer initially reported by Laurel Pfahler of Queen City Press and confirmed by the club on Friday morning.

FCC, who held the top spot in the MLS Allocation order, could have had potential issues with their salary budget should Chelsea have required any fee on top of Miazga’s max-TAM (~$1.6 million/year) deal. Albright dealt shrewdly, sticking to a long term strategy and brought Miazga to FCC in a “roster budget-friendly” method. Cincinnati currently have three designated players (Nwobodo, Acosta and Brenner) under contract for the next two seasons at least.

Hot Time in Old Town contributor Alex Calabrese released news Wednesday night that a deal was close following a tweet from the Post Cincy stating that both FCC and Miazga had interest in a deal in late June.

Miazga has featured in over 230 matches a professional including time with Vitesse, FC Nantes, Reading, RSC Anderlecht, Deportivo Alavés and the New York Red Bulls. The 6′ 4″ center back also has 22 caps for the US men’s national team after debuting under Jürgen Klinsmann at the age of 20 in 2015.

“Matt is a dominant defender that has a wealth of experience internationally and across numerous leagues in Europe,” said Chris Albright, FC Cincinnati General Manager. “But his knowledge of what it takes to compete and win in MLS, along with his high character and mentality, are what drew us to this opportunity. We feel he’s an excellent fit to the group that we’re building, and we are delighted to bring him to FC Cincinnati.”

The 27 year old defender had mixed success in England appearing twice in the English Premier League, but by many accounts impressed in his stops at other top-division clubs around Europe.

Miazga known for his physical skills has spent most of his career as the right center back in a four-man back line. He has been known for his aerial ability, positioning and athleticism, but his technical ability and speed of play have been thought to be inconsistent at times. Miazga is more apt to play a pass out of pressure than to generate space with the ball at his feet. Playing for one of the worst teams in Spain last season Miazga was continually under pressure and some of his possession and passing stats were well lower than career averages. He was towards the top quarter of defenders in recoveries in LaLiga in 2021-22 along with a respectable passing accuracy grade.

Miazga rose to prominence as a teenager with the New York Red Bulls, signing his first professional contract in 2013 at the age of 17. He would make his MLS debut in September of that season after spending time with NYRBII in the USL. The defender spent time with the senior and reserve side in 2014, before capturing the starting CB role in 2015.

The New York Red Bulls won the 2015 MLS Supporters Shield in what was standout season for the center back. Miazga was a part of the best defense in the Eastern Conference and helped the Red Bulls reached the conference finals before falling to the Columbus Crew. New York attempted to make Miazga a designated player following the 2015 season, but the defender opted for a $5 million transfer to Stamford Bridge in January 2016.

Miazga spent most of the remainder of the 2015-16 Premier League campaign with the Blues U-20 side. He would however make his debut in April of that year filling in for the injured John Terry and Gary Cahill.

Vitesse of the Dutch Eredivisie acquired his services on loan for the 2016-17 and 2017-18 seasons. There, Miazga helped the Vites win their first ever major trophy starting and playing the entire KNVB Cup final victory over AZ Alkmaar in April 2017. This win qualified Vitesse for the 2017-18 Europa League where Miazga would start 6 matches.

Miazga was sent to FC Nantes in the French Ligue 1 in the Summer of 2018 before being loaned to English Championship side Reading in January 2019. After positive reviews with Reading and helping secure their place in the Championship, Miazga returned to the Royals for the 2019-20 season. His second campaign with Reading was to mixed success following several injury spells, but the American did feature in 20 matches for mid-table side.

RSC Anderlecht under Vincent Kompany brought Miazga in on loan for the 2020-21 season. Miazga made 24 starts for the Belgian club who would finish 4th in the Jupiler Pro League that season. A permanent transfer was attempted by the Belgian side but the move turned out to be unsuccessful.

He would round out his final loan spell in 2021-22 joining Spanish La Liga club Deportivo Alavés. Miazga began the season as a starter, but fell out of favor heading into the Winter. The center back made 11 appearances for Babazorros, but none after February of 2022.

Throughout his European adventures, Miazga has continued to feature for the USMNT. While any of his 22 appearances were in 2018 and 2019 under coaches Dave Sarachan and current coach Gregg Berhalter, Miazga was called up to last Summer’s Concacaf Nations League group playing briefly in the semi-final vs. Honduras. Miazga is notorious for his trolling of Mexico starlet Diego Lainez during a friendly in 2018.

The lack of playing time in Spain surely hurt his chances to play in the past World Cup qualifying cycle, but with the injury to Miles Robinson, Miazga could have his chance to play onto the side to travel to Qatar this Winter. The center back spot on the US roster is in flux with Walker Zimmerman being the only likely starter.

It remains to be seen what fitness levels he has maintained over the Summer. However, with strong form for the end of this season, Miazga could compete with Aaron Long, Chris Richards, Mark McKenzie, John Brooks, Cameron Carter-Vickers and others for a spot on the plane to Qatar. It could be a long-shot, but guaranteed minutes in Cincinnati could go a long way for Miazga to realize his World Cup dreams.

The fact that general manager Chris Albright was able to get this move done is an immense credit to how he understands the MLS salary budget system. By our account, FCC wass very limited on the salary contract and transfer fee they could absorb for the 2022 season. A DP deal was not an issue and with a high salary demand, a large transfer fee also would have derailed the deal. The loan of Isaac Atanga to Göztepe S.K. in Turkey and the pending mutual termination of Haris Medunjanin’s contract following Saturday’s match should have also helped add several hundred thousand dollars in the budget to fit in a max-TAM deal.

With the addition of Miazga, Albright has ensured the core of the team at the center back role (Miazga), 6 (Nwobodo), 10 (Acosta) and at forward (Vazquez/Brenner). All of these players (Vazquez 2023 option) should be under contract for the foreseeable future. Add in young goalkeeper Roman Celentano and the future is looking very solid for the orange and blue. A much welcome change after the past three seasons.

The move may not make FCC an MLS Cup contender in 2022, but it should put them well on their way to ensuring continuity for next season and beyond in the backline. With Tyler Blackett and Geoff Cameron’s future uncertain after this season, Miazga looks to be the player Albright has chosen to build the backline around for the future.

“I’m really excited to join FC Cincinnati,” said Miazga. “It’s a pleasure to be back in the United States and be able to compete in MLS again. The project here in Cincinnati is something that has drawn me here, and I want to say a special thank you to Jeff Berding, Chris Albright and Pat Noonan, who were all a big part of me coming to FCC. I can’t wait to meet all the amazing supporters, who I’ve heard so many good things about, at TQL stadium.”