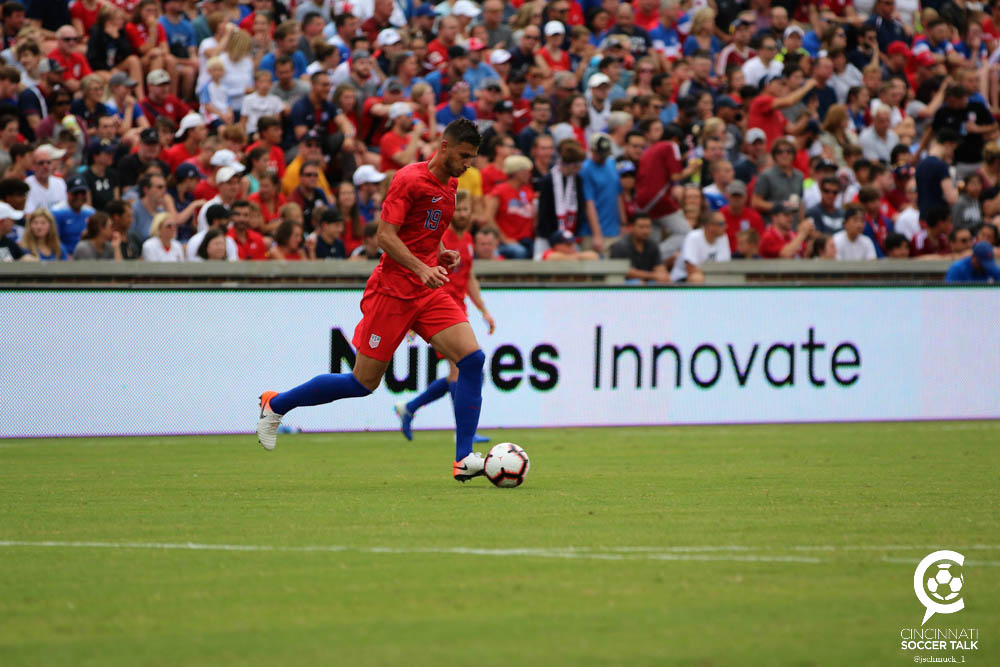 Matt Miazga arrives at FC Cincinnati looking to provide an answer at one of the Orange and Blue’s neediest positions: center back. Miazga joins FCC following a free transfer from Premier League giants Chelsea. He signed a 3-and-a-half-year contract with a yearly salary at or below the maximum targeted allocation money (TAM) amount, $1,612,500 in 2022.

Miazga’s pedigree isn’t in doubt. He signed a homegrown contract with the New York Red Bulls in 2013, playing 34 times for the Red Bulls before moving to Chelsea for a reported $5 million transfer fee. During his career, Miazga has played 22 times for the U.S. Men’s National Team, earning his last cap in 2021.

If you’re looking for the biggest question mark about Miazga’s arrival it involves what happened after his move across the Atlantic. Miazga never broke through at Chelsea, instead finding himself as a member of the club’s sizeable loan army. Since 2016, Miazga played for five clubs in five countries while on loan. Despite longer stays in the Eredivisie at Vitesse Arnhem and in the Championship at Reading, Miazga hasn’t had stability year-to-year at a club.

During the 2020-2021 season, Miazga started 24 league matches at Anderlecht, playing for Belgium and Manchester City legend Vincent Kompany, a pretty good center back himself. At the end of the season, Miazga expressed a willingness to stay, saying “I wanted stability.” However, Anderlecht didn’t meet Chelsea’s valuation and Miazga was back on loan to start the 2022 season this time to Alaves in La Liga, a move that did not go as well as the previous one. Alaves went on to finish last in La Liga and were relegated to the Segunda Division.

Miazga should have every opportunity to get the stability he’s been looking for in the Queen City. Chris Albright and Pat Noonan are at the beginning of their project at FCC and Miazga looks to be a key piece of their future vision. So what will he bring to the field?

Miazga looks the part of a dominant center back. His 6’4″, 185 pound frame gives him the size and strength to compete with even the biggest of center forwards. He is right footed, and has played mostly right center back throughout his career, but has shown the ability to slot in at left center back when he is needed.

Getting a full picture of Miazga’s game as it stands is tricky because of the aforementioned loan stint in Spain when he played in just 11 matches. In a small sample size playing for a bad team in Spain, Miazga profiled above average in terms of ball recoveries (10.95 per 90), defensive duels won (5.29/90), and aerial duels won (4.1/90), according to Wyscout data. Also of note is an above-average rank in terms of counterpressing recoveries.

Getting outside of statistical analysis and into game film, watching Miazga is like watching a how-to video on center back movement. His positional proficiency is off the charts, and he seems to step with each attacker and drop into space at precisely the right moments. He is also a very good 1v1 defender when he is facing the right side of the field. His one drawback in this category is that his hips are a bit stiff, and he struggles to get them turned if attackers can cut inside on him and make him turn toward his left.

He contributed little in terms of forward passing but, again, playing for the worst team in the league, that doesn’t come as much of a surprise. His technique in this regard isn’t great. He tends to loft the ball toward his targets when passing long instead of driving it, and that creates 50/50 opportunities out of many of his longer forward passes. His passing is accurate, however, and when he tries to pick out the feet of a hold up forward instead of attempting a long diagonal or through ball he tends to get better results.

This is where Miazga’s pedigree as an international level (for the U.S., at least) comes into play. Don’t overlook the fact that a legendary center back, Kompany, wanted to keep Miazga in his plans going forward, too. Miazga’s talent and quality haven’t gone anywhere and hopefully, with a long-term deal in place where he’ll get consistent minutes and be relied upon to be the best player on the backline allows him to get back to playing his best soccer. And being a relatively short drive away (by midwestern standards, at least) from Gregg Berhalter and Soccer House will be a good thing with the World Cup looming too.

The Present And Future

So what does Miazga’s arrival mean for the Orange and Blue on the field in 2022 and beyond?

In a Zoom press conference following the announcement, general manager Chris Albright was clear that he wasn’t only looking at players that could help the team win now, but also win sustainably in the future. For the playoff run, Miazga provides an upgrade at center back. Without midfield additions, Noonan may choose to stick with a three-center back lineup and Miazga should be able to step into the middle in place of Geoff Cameron, partnering with Nick Hagglund and Ian Murphy or Tyler Blackett.

Noonan could opt for a formation with four defenders but, with Brandon Vazquez and Brenner in such good form, and question marks at full back, the 5-3-2 (or 5-2-1-2, whatever you want to call it) seems like the most obvious path forward, at least through the end of the season. Miazga has played almost exclusively in a four defender setup over the past few years, but his average agility and stiff hips would make a three-center back formation a safer option.

Perhaps Miazga’s biggest impact on FC Cincinnati’s defense could be in his ability to fit into a pressing style. Coach Gough and Justin Hoyte mentioned in their most recent Talking Tactics episode that a big area of concern was FCC’s center backs dropping off too early and creating a large gap between the midfield and defensive lines. Miazga not only played in a pressing system with the New York Red Bulls the last time he was in MLS, but he did so well enough to earn a move to Europe. The team that he spent his last season on loan with, Deportivo Alavas, also asked him to maintain a very high line. His positional intelligence and long stride allow him to do this very effectively.

It’s worth considering the implications of Miazga’s arrival beyond this year as well. Though there was no other way to bring Miazga in other than as a TAM player, it’s still a coup for Albright to have closed the deal. According to Albright, once Miazga saw the FCC facilities and began to understand the ambition of the club he knew that this move would allow him to meet his goals. He will have the opportunity for immediate playing time and a chance to work back into the USMNT conversation for Qatar this winter. Furthermore, Miazga will almost certainly be one of FCC’s highest paid players next season but with Allan Cruz and Yuya Kubo, two high earners, both likely off the books, his higher cap hit shouldn’t be too much of an issue.

Not that any of FCC’s designated players would have been on the move this window to make the deal happen but Miazga gives the Orange and Blue additional investment along the spine of the team. 2023 could see FCC lining up with a DP striker, a DP central attacking midfielder, and DP defensive midfielder, and a high TAM center back. Games are won and lost in the middle of the field and Albright’s continued investment in that area makes a lot of sense.

Miazga is also just 27 and won’t turn 28 until the middle of next season so there should be no concerns about him being on the downside of the aging curve at this point in his career.

Albright’s decision to hold onto the top spot in the allocation order paid off. After multiple trades, Alright leveraged it into at least $350,000 of General Allocation Money (DC United traded Junior Moreno’s MLS rights for $300,000 in GAM) and Miazga. When asked about why he held onto the top allocation spot for so long, Albright mentioned that he had wanted to keep his options open. After looking at several center backs that were on the list, it became apparent that Miazga had the right mix of MLS and European experience. After the two parties began the conversation, Albright knew that Miazga was the player that he wanted. “We did everything in our power to leverage the allocation spot but still get our guy.”

The FCC front office was patient and brought in someone who should fill one of the biggest needs on the team. Miazga’s ceiling might not be as high as it was when Chelsea spent $5 million on him in 2016 but he could absolutely be a top-tier MLS center back. Also importantly, Miazga’s floor seems quite high. Getting him as a TAM player further lowers any risk and further limits it because FCC didn’t have to lock in one of its three DP slots for years. His film and his statistics both indicate that he could walk into MLS as a top-5 center back on day one.

Miazga’s arrival is one more step in Albright and Noonan’s vision for the Orange and Blue and, in our view, this move perfectly threads the needle of getting an upgrade now as well as putting the team on a trajectory to succeed for years to come. Miazga is already on his way to Cincinnati, and the team expects him to be in training this week and eligible to play next weekend against Atlanta United.

Asked about how the roster is shaping up so far and how Miazga fits into his plans Albright was clear that he was very happy to be ahead of schedule, but that there was still lots of work to be done. “When you think of FC Cincinnati [we want there to be] four or five names that roll off your tongue. We’ve found some of those pieces sooner than I’ve expected, but we’re not close to a finished project in terms of what we need to compete and be sustainable in this league.” The team can still add domestic free agents to the roster, and Albright believes they are close to one or two more additions.