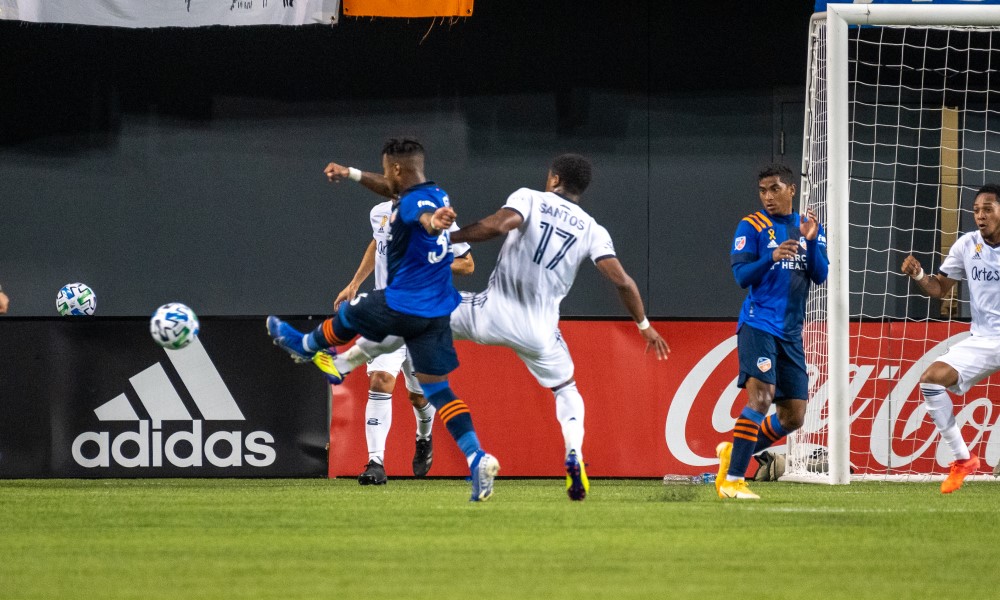 FC Cincinnati’s trade for Sergio Santos is full of what-ifs. But first, let’s consider what Santos will bring to the Orange and Blue on the field. Then we can dig into what the deal means for the future of the squad.

What Santos Brings To FCC

Just looking at the numbers, Santos’ profile is that of an elite MLS striker. Unfortunately, Santos has never been a full-time starter, starting 47 of 75 league games, since his arrival in MLS in 2019. 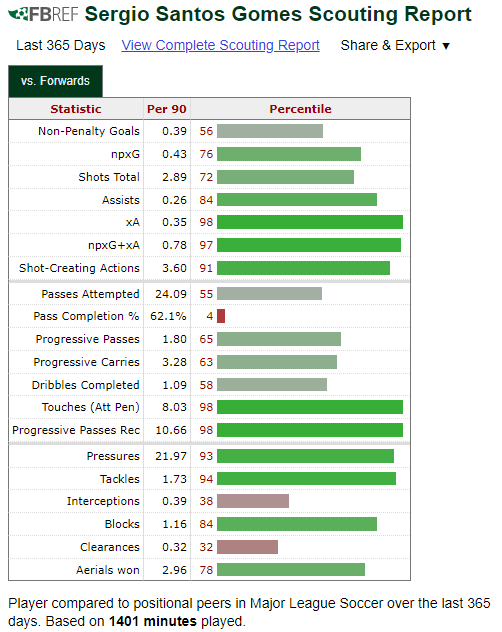 According to Football Reference’s scouting report comparing Santos to other MLS forwards, he’s put up elite numbers in terms of goal creation over the past year. His 0.43 npxG per 90 minutes ranks in the 76th percentile for MLS forwards and his 0.35 xA placed in the 98th percentile. He looks to be a solid option to receive the ball in dangerous positions, ranking in the 98th percentile for both progressive passes received and touches in the attacking penalty area.

Santos should chip in defensively too and his familiarity with Pat Noonan and a pressing system with another striker should allow him to adjust quickly. Santos’ ability to put opponents under pressure and win the ball back high up the field all rank highly compared to his peers.

For some examples of Santos’ game in action, check out this Twitter thread by FCC Analysis.

So the stats make Santos look like a great striker but he never established himself as an everyday starter in Philadelphia. It’s worth looking at the breakdown between how he plays as a substitute compared to his time as a starter.

Santos has been much more dangerous in terms of generating scoring opportunities coming off the bench but even as a starter, he’s well above average compared to MLS strikers. Santos’ sample size in MLS should provide assurances that he’ll continue to be, at the least, a good attacking option going forward.

Adding another good striker is a good thing, especially with Noonan’s seeming preference to play with two strikers. Giving him the option to manage minutes for Brenner and Vazquez as well as be able to substitute on a dangerous attacking option should bolster the Orange and Blue’s attack in the second half of the season.

The Trade And Its Ramifications

First, the specifics of the trade. To acquire Santos, FCC paid Philadelphia $300,000 in General Allocation Money this season with the possibility of paying $625,000 more in GAM next season if performance-based or contract conditions were met. For context, Albright has wrung a good chunk of that $300K from just sitting at the top of the Allocation Order and trading back when other teams looked to sign someone.

Santos’ current contract with MLS has guaranteed compensation of $918,500 for 2022, putting him firmly in the Targeted Allocation Money end of the roster. So the addition of Santos could impact FCC’s ability to make an additional major signing unless there are other outgoings this transfer window. There are a few things I find interesting about the trade from a process perspective that could help to make sense of the move.

Needed Depth For All Contingencies

First, Santos provides needed depth for Brenner and Brandon Vazquez. Brenner already requested a transfer this season and, according to reporting from Laurel Pfahler, FCC will be listening to offers from European clubs for the Brazilian this window. Whether or not a team meets FCC’s valuation of Brenner remains to be seen.

Given the quality on display from Brenner over the last couple of matches, I’d be loath to see him depart. However, if both the front office and the player have agreed that the situation going forward is untenable, we could still see Brenner exit this window.

Brandon Vazquez has also generated some transfer buzz, being linked with a move to Liga MX giants Chivas Guadalajara. Given the unknowns surrounding his contract situation (Does FCC have an option to extend his contract? Will he be a free agent?). It should be noted that Noonan talked about Vazquez as a part of FCC’s long-term plans but until pen is put to paper, Vazquez’s future in Orange and Blue is very much a question mark.

So Santos provides a quality insurance policy both this year and next year if Vazquez or Brenner were to leave. Also, and maybe most importantly, Santos gives FCC a needed attacking option, either starting or off the bench, this season, as the Orange and Blue chase its first MLS playoff appearance. Santos’ quality on the field should fit with both Vazquez and Brenner. As I mentioned above, giving Noonan an option to change the game through an attacking substitution should make FCC better on the field.

If Albright’s calculus is that it’s easier to identify low-cost center back options that will improve the team, whether that’s this transfer window or this offseason, rather than low-cost effective attackers, the Santos trade fits that view. And it’s worth noting that the Union have one of the best center back pairings in MLS in Jack Elliott and Jakob Glesnes. Glesnes joined the Union for a $770,000 transfer fee from the Norwegian Eliteserien and Elliott was a fourth round SuperDraft pick from West Virginia University. Early returns are positive on 2022 first round pick Ian Murphy so if Albright is trusting his ability to identify diamond in the rough center backs, we should trust the process, at least for now.

It’s easy to think of Chris Albright as the protagonist in this trade and immediately speculate about the futures of Brenner and Vazquez. However, it seems to me that Albright could have just been taking advantage of an opportunity to get a very good player at a reasonable price. Philadelphia’s academy is the envy of the league and its current crop of young players is now different.

Four Union players were on the U20 U.S. Youth Men’s National Team that just won the CONCACAF title, qualifying the U.S. for both the U20 World Cup and the 2024 Olympics. Paxten Aaronson and Quinn Sullivan both played very well at the tournament and given the Union’s preference for playing the kids and selling them on, both players likely demand more playing time. Both players could slot in and play striker in Philadelphia’s system, too. Philadelphia’s ownership group is less willing to spend than FCC’s so a directive from up top to cut the wage budget while boosting the future sale value of key assets could make sense.

FCC faces a similar issue with the returning Quimi Ordonez, however, given the longer-term injury timeline for Dominic Badji, Ordonez should still get minutes with the first team. Having four strikers for two spots is a good place to be. Santos provides an option if Brenner or Vazquez leaves, either this year or next, and if they don’t, he’ll bolster the attack either starting or off the bench. Seems like a pretty good piece of business from Chris Albright to me.