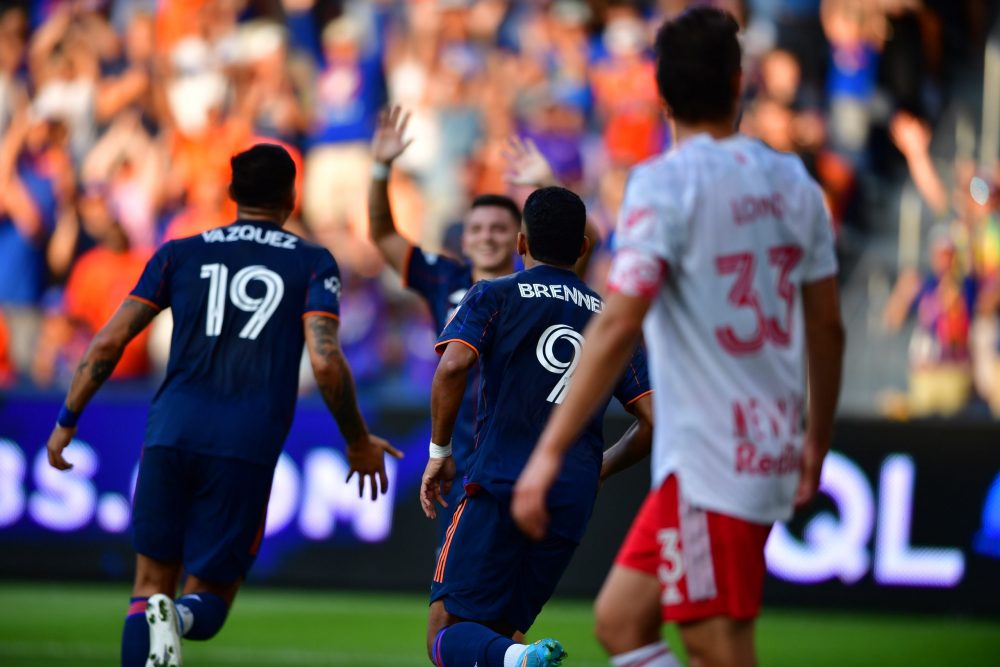 Major League Soccer has branded this week “Rivalry Week”. While the derby in central Ohio doesn’t happen for another eight days, fans had salivated for this matchup for months. The teams had changed quite a bit since last October’s 1-0 loss, but the common denominator was still there—the once “Golden Boy” Frankie Amaya was coming back to town.

Amaya was much more of an afterthought as tense as the matchup was. For the second straight home game, FCC fans and the squad were more irate at the officiating crew.

FC Cincinnati (7-5-7, 26 pts.) continued their streak of positive results with a 1-1 draw against the New York Red Bulls (9-6-5, 33 pts.) The Orange & Blue are now undefeated in five straight matches but have drawn results in four of those matches.

FC Cincinnati came into Saturday’s game undefeated in a stretch against playoff-caliber competition (one win, three draws). Midfielder Obi Nwobodo returned to the team after serving a yellow-card suspension, but the squad was still without forward Dom Badji, midfielder Junior Moreno, and goalkeeper Alec Kann due to injuries and health protocols. Defender Alvas Powell also missed the match, as the Powell family welcomed a healthy baby daughter into the world.

The major arrival to the team came later in the game. Forward Sergio Santos, fresh off his transfer from Philadelphia Union this week, made his appearance before the crowd at halftime. The outlook is for Santos to train with the team and be ready for the Wednesday matchup against Vancouver.

While the Red Bulls were primarily healthy, defender Sean Nealis was forced to miss his first match of the season. Nealis was sent off after a red card in the 73rd minute of New York’s 1-0 win against Sporting Kansas City. The defender had accumulated 1,693 minutes over the season, ranking him seventh overall in the league.

Those fans expecting a slugfest got their share of yellow cards and boo birds in the first half. A yellow card on Tyler Blackett in the 2nd minute seemed to set the stage for a rough outing. In the first 20 minutes, FC Cincinnati was earning chances on goal, while New York pressured the defense into turnovers.

The Orange & Blue broke the deadlock halfway into the first half. Brandon Vazquez grabbed a cross in the box from Luciano Acosta in the 20th minute. While his first shot was saved, Vazquez grabbed the rebound and danced around goalkeeper Carlos Coronel to tap in his ninth goal of the season. Vazquez now has the single-season scoring record for FC Cincinnati during their MLS existence.

Vazquez was humble about his goal after the match. “For me, it’s just another goal. I’m happy to get my ninth goal, but we have a long season ahead of us. We’ll celebrate the little things now, but as of tomorrow we’re turning the page and focusing on Wednesday’s game.”

Things changed quickly and unexpectedly as the Red Bulls gathered confidence. A high boot from Ray Gaddis in the box was deemed too dangerous by the refereeing squad, and New York was awarded a penalty kick. Lewis Morgan converted in the 29th minute for his ninth goal of the season.

FCC has faced six penalty kicks this season, the highest for any MLS squad.

While FCC had advantages in possession (52/48) and shots (7/4) in the first half, New York had a decisively psychological advantage. Much of the FCC fouls were in frustration, including a tussle in the box after the penalty kick that could have dealt more yellow cards. Allan Cruz was given a 30th-minute yellow card that would eventually spell trouble.

Cruz would be shown the door early in the second half with a shoulder-to-shoulder approach on the Red Bulls’ midfielder Luquinhas. His second yellow card in the 58th minute left FCC with 10 men. While FCC still poured on pressure with solid approaches by Alvaro Barreal in the second half, the possession numbers eventually flipped New York’s way.

However, New York never really posed a scoring threat after the first red card. The Red Bulls’ best opportunity came from a Morgan curler in the 63rd minute, but goalkeeper Roman Celentano palmed the shot over the net safely.

Celentano praised the defense’s work. “Across the board, we’ve been defending a lot better as a team,” Celentano mentioned after the game. “The box defending, the defending up the field, it starts with the front line doing the work. We defend as a team, and the back line has been solid the past few weeks. The chemistry between the guys has been growing.”

Much of the game had slowed to the pace that New York demanded, and the tension finally bubbled over at the end of the game. A 90th-minute spat between Acosta and New York’s Aaron Long appeared to result in a glancing head-butt from the FCC captain. Referee Rosendo Mendoza deemed this violent conduct and gave a red card to Acosta. While the team was reduced to nine players, New York was unable to capitalize, ending the game in a 1-1 draw.

Both Acosta and Cruz will be unavailable for the game on Wednesday against Vancouver.

The draw keeps FC Cincinnati in sixth place at the moment, while New York remains atop the Eastern Conference.

While FCC doesn’t have to leave the state any time soon, its schedule will be stuffed. The team hosts Vancouver Whitecaps FC on short rest for a Wednesday night affair, then travels to Columbus to face the Crew on Sunday night. New York Red Bulls retreat home for the Hudson River Derby against NYCFC next weekend.