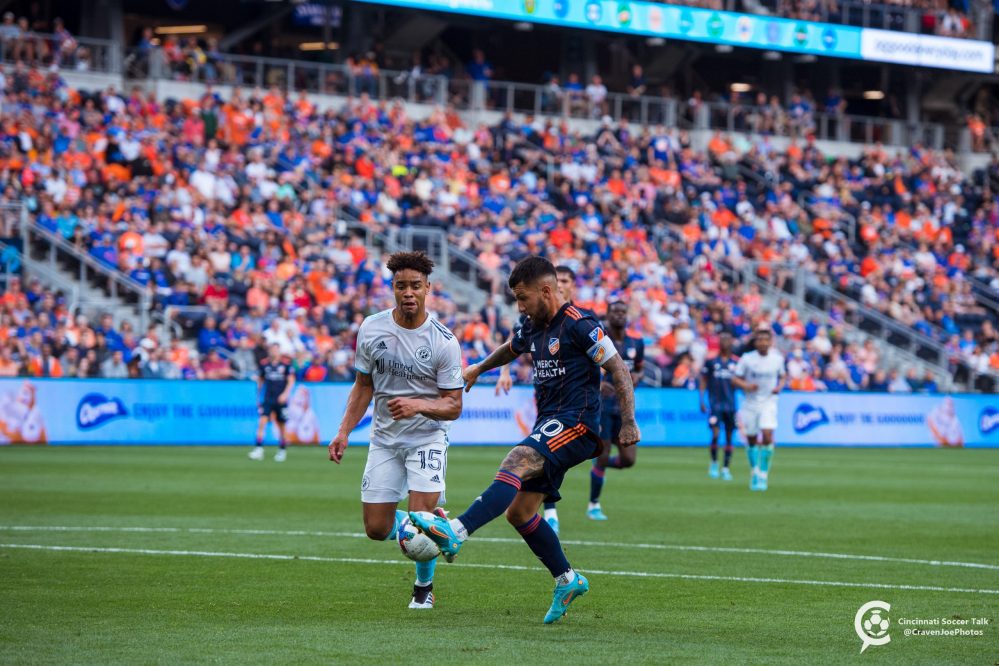 Down Obi, FCC looks to keep the momentum heading into New England

After the craziest game of the season, FC Cincinnati faces the challenge of regrouping and preparing for a tough road match against New England Revolution, a team that it has already lost to twice this season.

Pat Noonan’s squad experienced a little bit of everything in a 4-4 wild one vs. New York City FC on Wednesday in TQL Stadium. The team looked brilliant in racing to a 3-0 lead, abysmal in surrendering said lead over a 10-minute span at the end of the first half, and then dangerous again via Brenner’s 70th-minute equalizer and very nearly forcing home a late winner via tremendous pressure on the opposition goal in the closing moments.

But with the eventful draw in the rearview mirror, Noonan and company now face a difficult encounter against Bruce Arena’s Revolution. On May 11, New England eliminated the Orange and Blue from the U.S. Open Cup in a 5-1 rout against a team featuring a lot of backups. Ten days later, the Revs came into TQL Stadium and squeaked out a 3-2 decision, with Tommy McNamara scoring an 89th minute to maintain the Revolution’s dominance in this matchup. Arena’s team has now gone nine matches without losing.

Both teams will be missing a couple of key players from that matchup. New England and U.S. Men’s National Team goalkeeper Matt Turner has completed his team to play for Arsenal in the English Premier League, and Adam Buksa, who scored New England’s second goal that night, has moved on to RC Lens in France.

FCC is also missing some important players, including forward Dominique Badji and midfielder Junior Moreno, both out with leg injuries, long-term injury victim Ronald Matarrita and midfield stalwart Obinna Nwobodo, who sits out with a yellow card suspension after picking up his fifth caution during the NYC match.

Noonan mentioned that coping with the lineup absentees and fixture congestion is just part of what good teams have to deal with in order to be successful. He hinted at a possible tactical change along with a new face or two in the lineup.

“There’ll be a rotation, you’ll see a new body in there. Yeah, obviously, it’s a big piece that we lose just with what Obi brings in,” Noonan said. “We’ll try to find ways to put guys centrally in a position where we have good stability in there. A combination of ball winning, but protecting the backline and guys that can also help us get forward when we’ve won the ball. We’ll talk through that in the coming days, see how everybody got through the game, and then what our best options are to fill out the midfield.”

Noonan said without having predicted where the team would be in the league table at the end of June, he is pleased with the team’s overall progress in terms of performances at this stage of the season and sees the next 10 games as vital to determining whether this season is a success for FCC.

“To be honest, I think we’re right where we should be,” he said. “The expectations weren’t ‘we’re going to be in the middle of the table, the top of the table, bottom and table.’ It was, we’re going to see progress in our group. And I think where we are in the table, where our performances have been having shown progress. And I think we deserve to be where we’re at. But we didn’t talk a whole lot about in this first half of the season, ‘this is our goal.’ So now we’re here, we’ve talked about the next 10 games as an important stretch to position us to have meaningful games to end the year. I like where we’re at. And I think based on conversations early on, this is where we would have expected to see in terms of progress. Now the results, they come and go. You can have good results, or good performances and not the results to go with it. I think where we’re at is pretty fair.”