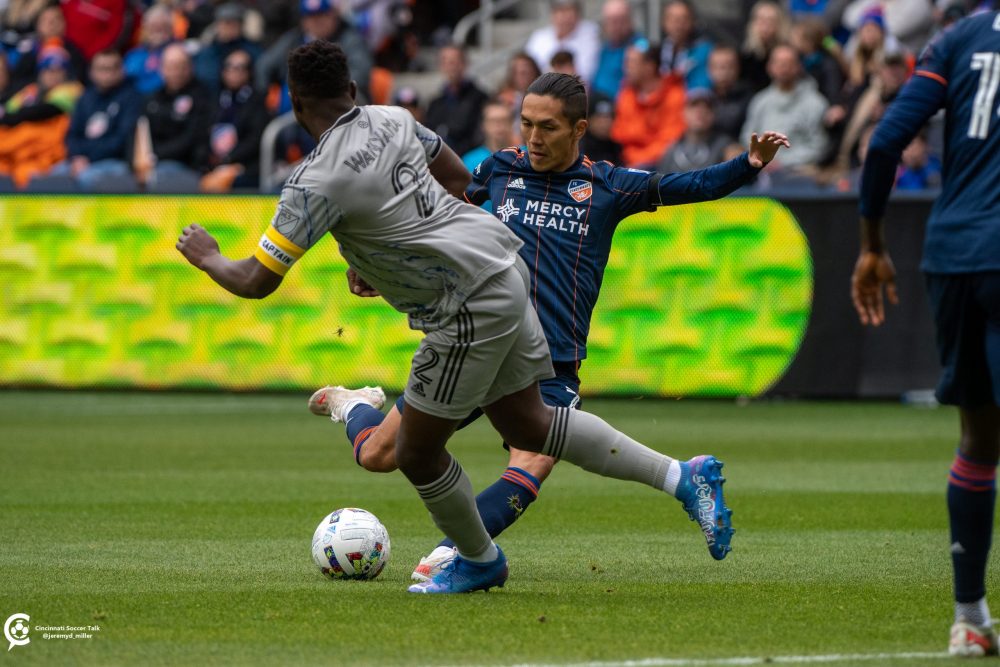 Both clubs are coming off losses after win streaks

Having had its four-match league winning streak broken at home last weekend, Pat Noonan’s FC Cincinnati side looks to get back to winning ways Saturday on the road at CF Montreal.

Noonan said in comments distributed by the club to media, that the recent success should serve to enforce belief within the squad that they can play winning soccer and be successful against any opponent.

“You want your players to think that they’re a playoff team and a championship team. Regardless of what others think about that opinion, it’s important that your players believe in themselves and what we’re doing and where we’re going,” he said. “And so yes, I think we all believe that we’re capable of being a playoff team, we know there’s a lot that’s going to play out prior to the conclusion of the regular season. But yes, these guys should feel that they’re a playoff team.”

The first year FCC coach said the biggest difference in his team from its first match with Montreal, a 4-3 loss at home in early April, is defense.

“I think defensively, we’ve certainly improved from that game, I think there were a lot of individual errors that that cost us some goals, but also some things as far as the whole of the team that defensively wasn’t good enough, and concede four goals at home,” Noonan said. “So we conceded too many opportunities, I think since then we’ve improved as far as the defensive side of the ball and being better connected and eliminating some of those individual mistakes. So yes, we’re a better version of ourselves, both from the results and where we’re at defensively, primarily.”

When Montreal won 4-3 at Cincinnati on April 2, it began a stretch of 5 wins in 6 matches. This includes a brief stint on top of the Eastern Conference table. A pair of 2-1 losses, at Nashville and at home to Real Salt Lake, have dropped the Quebec club to 4th place, but Noonan is duly attentive to the capabilities of his opponent, saying that Saturday will be a “good challenge.”

“(This is) a team we’ve seen recently and saw some of the qualities, certainly with the ball, collectively and individually. (They are) a team that I think with the ball spaces the field, has good ideas and (knows) how to break teams down,” Noonan said. “So something that we need to be very mindful of and connected as far as how we get pressure to the ball and how we limit, you know, some of their playmakers in dangerous spots. You know, defensively, they’re organized too. So we’ve got to find ways of moving the ball to create some pockets that we’d like to find to get us on the ball and running at their backline.”

Noonan said along with Montreal’s approach, Wilfried Nancy’s team benefits from individual talent, a strong collective mentality, and good leadership from Nancy himself.

“Wilfried does a very good job with this team, I think they’re well organized. Again, they have good ideas, and how they space the field and how they get their best players on the ball and good spots to break teams down, “Noonan said. “I think they have good individual quality, but that comes out because of the collective of the group. And they can beat you in different ways. And I think they’ve shown that. So it hasn’t really been a surprise, I guess for myself because even in previous years with Philly, they were always a tough matchup.”

Saturday’s game will be the team’s last until three weeks later on June 18 at Philadelphia, as teams step back for a quartet of matches to be played by the U.S. Men’s National Team, including June 1 at TQL Stadium vs. Morocco.

Noonan believes the break can be useful but says it won’t affect how the team approaches Saturday’s game.

“The break won’t change how we approach the game or how we approach the minutes, I think physically our group is in a good place. Both with the guys that are ready to start this game and who we have in reserve,” he said. “So you know, we’ll go and attack it in a way where we’ll look to be aggressive in the right ways. And there’s no limitations on minutes for players.”