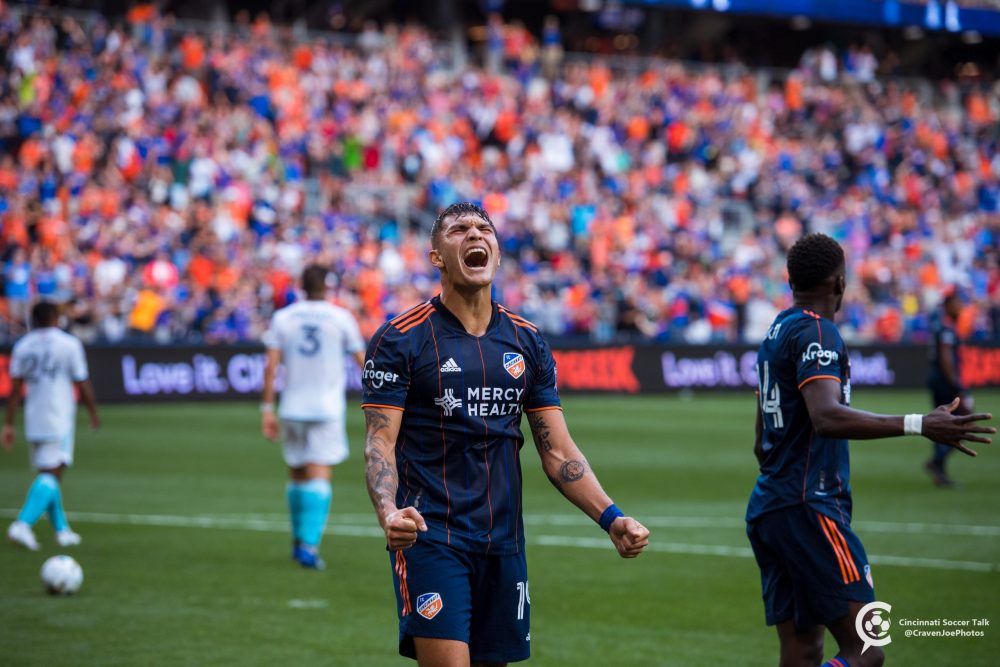 Midfield Pressure, and Brandon Vazquez highlight in this week’s analysis.

FC Cincinnati’s four-game winning streak came to an end on Saturday after a 3-2 defeat to the New England Revolution. In looking back, it’s fair to say that the final score paints a more flattering picture than the overall number of chances created. Both teams finished the night with 10 shots and 0.7 xG, per Football Reference.

New England, the defending Supporter’s Shield winner, hasn’t played up to last year’s standards but there’s no denying the Revolution still has a talented roster. Some of that individual brilliance was on display in the first two New England goals: a scissor kick by Sebastian Lletget following a chaotic sequence and a backheel by Adam Buksa despite Nick Hagglund’s defending. Roman Celentano likely should’ve done better in dealing with Tommy McNamara’s winning goal but the rookie from Indiana University had been pretty much perfect before that shot this season. Other than those chances, FCC limited the Revolution’s attacking chances. Brandon Bye had a lot of joy down the left side of the Orange and Blue’s defense but, thankfully, FCC won’t face that level of quality every week.

Offensively, the Orange and Blue took advantage of limited opportunities as well. Brandon Vazquez’s opening goal in the 26th minute continues his strong start to the season. Alvaro Barreal’s equalizer in the 58th minute made the case for more playing time. However, FCC struggled to create in possession. Pat Noonan’s attacking game plan thrives when the Orange and Blue can get out in transition and attack retreating defenses. New England’s approach allowed FCC to control the ball more than usual and the Orange and Blue struggled to consistently translate possession into dangerous chances.

A couple of other things that occurred to me this week:

At the beginning of the season, I wrote about the curious case of Brandon Vazquez’s numbers and if we were all looking at a striker ready to break out. Over the last two seasons, Vazquez has played 1439 minutes as a starter, so, assuming he plays most of the match against Montreal, he’ll cross the 1500-minute threshold this weekend. In those starts, he’s scored 10 goals, including his seven this season.

Vazquez’s underlying numbers continue to support his continued performances as a legitimately good MLS striker. His 0.48 non-penalty expected goals per 90 minutes and 0.12 expected assists as a starter and 0.64 NPxG+xA per 90 minutes this season puts him among the elite in the league. American Soccer Analysis’ goals added above average has Vazquez in the top-20 for outfield players so far in 2022 in terms.

Vazquez’s contributions aren’t limited to simply filling up the advanced stat sheet. His ability to find space in the box by getting into defenders’ blind spots with late movement should ensure that Vazquez will continue to be on the scoring end of chances. If you haven’t seen it already, watch this video breaking down Vazquez’s movement.

Some great clips of #9 movement in the box from FC Cincinnati's Brandon Vazquez – Various ways to assess the situation/teammates/positioning to create space to score:

After missing out on this summer’s USMNT camp, Vazquez seems to be a long shot for this winter’s World Cup, at least barring any unforeseen circumstances. However, Vazquez is still only 23 and could be in his prime when the 2026 World Cup (mostly) on U.S. soil rolls around.

Vazquez’s contract situation after this year is a bit of a mystery. Both Laurel Pfaler and CST’s Roster Tracker have Vazquez’s contract expiring after this season, following an extension signed during the 2020 season. At this point, it’s unclear whether or not FCC has an option to extend Vazquez’s contract by a season or not. If the team doesn’t have an option, Vazquez’s eligibility for free agency is also an unanswered question.

However, Chris Albright does have the answers to these questions and an extension for Vazquez should be near the top of his list of priorities. If Vazquez continues his form, he’s sure to generate interest from bigger leagues.

Obi Nwobodo and Junior Moreno have, in many ways, solidified FCC in central midfield. Nwobodo’s injection of much-needed athleticism and his nose for finding and winning loose balls gives the midfield something it has lacked in MLS. However, in the four matches, they’ve started together, Moreno and Nwobodo have struggled to turn pressures on the ball into possession changes.

Using data available on Football Reference, there are a couple of aspects worth examining. First, Nwobodo and Moreno have been responsible for nearly a third of FCC’s pressures in games they’ve started together. First of all, the Toronto game, with the early red card, should be treated as an outlier. In the next two games, on the road against Minnesota United and then against the Chicago Fire, Moreno and Nwobodo were responsible for about 30% of FCC’s pressures in the defensive and middle thirds of the field.

Against the Revolution, that changed. Nwobodo and Moreno put fewer opponents under pressure in FCC’s defensive third and were responsible for nearly half of FCC’s pressures in the middle third of the field. Part of this is surely a result of the Revolution having less possession in that part of the field than previous opponents. Keeping an eye on where the midfield double pivot is doing most of its pressing will be something to keep an eye on moving forward.

The other thing worth discussing is how often those pressures are leading to FCC recovering possession. Football Reference, using Statsbomb data, defines a successful pressure as one leading to the pressuring team recovering possession within five seconds. As a midfield pairing, Moreno and Nwobodo have obviously pressured opponents quite a bit. But those pressures have not resulted in FCC winning the ball.

Out of the 200 pressures by Moreno and Nwobodo, just 44 have been logged as successful. That includes the match against the Fire when they combined for 58 pressures but FCC won possession just four times. So Nwobodo and Moreno are getting pressure on the ball but for whatever reason, opponents haven’t been losing the ball.

One possible explanation is Nwobodo’s midseason arrival during a busy period on the schedule. FCC’s press might be less effective simply because Nwobodo and his teammates haven’t had the time in training to iron out the details of Noonan’s pressure package. We can watch for weekly improvements but if this theory proves to be correct, expect to see a jump in pressing efficiency after the upcoming international break.