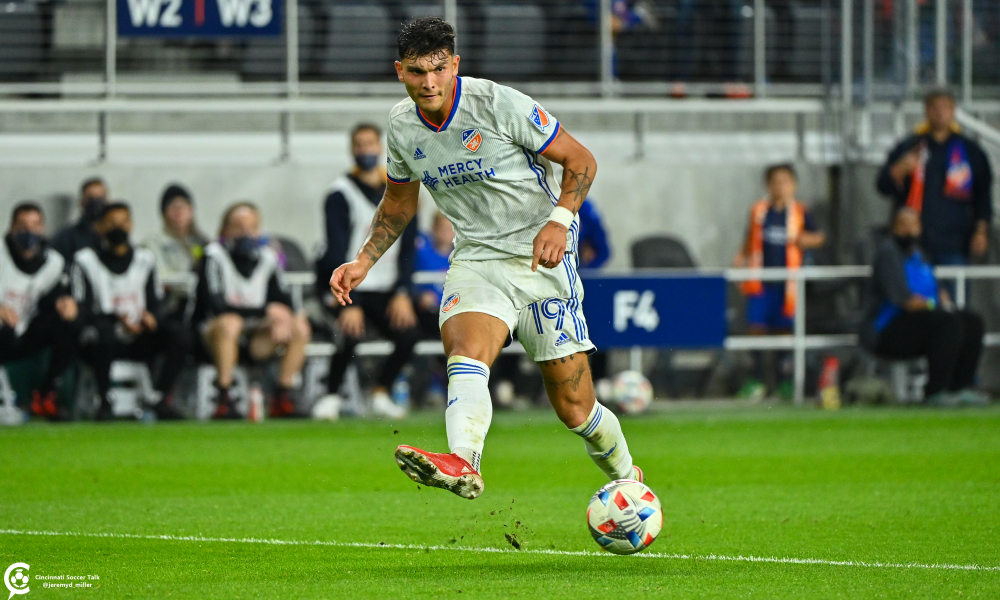 Brandon Vasquez has put himself in good positions for FC Cincinnati in 2022. We dive into his starting minutes to find out if that is an oddity or the real deal.

Brandon Vazquez has been really good for FC Cincinnati since the start of the 2021 season. His underlying numbers suggest he’s played like an elite striker in MLS. Obviously, if he was at that level, it’d be a major coup for FCC’s front office. It gives Chris Albright and Pat Noonan another foundational piece on the roster as they look to build the Orange and Blue into a contender. But how good is he?

I was pushed to dive into this after CST’s Ken Hoetker pointed out who popped up in Vazquez’s Football Reference profile as “Similar Players,” which finds comparable players based on statistical production. In the case of Vazquez, over the last 365 days, his top two similar players are Daniel Musovski and Valentin “Taty” Castellanos.

So he is being compared to a backup striker on a very good team who played most of his minutes in USL last season and MLS’s reigning Golden Boot winner (who was linked with a seven figure transfer fee out of MLS during the offseason.) There are clearly similarities across a number of statistical measures in goal creation, possession, and defensive output. But where does Vazquez fall on the continuum between Musovski and Castellanos? 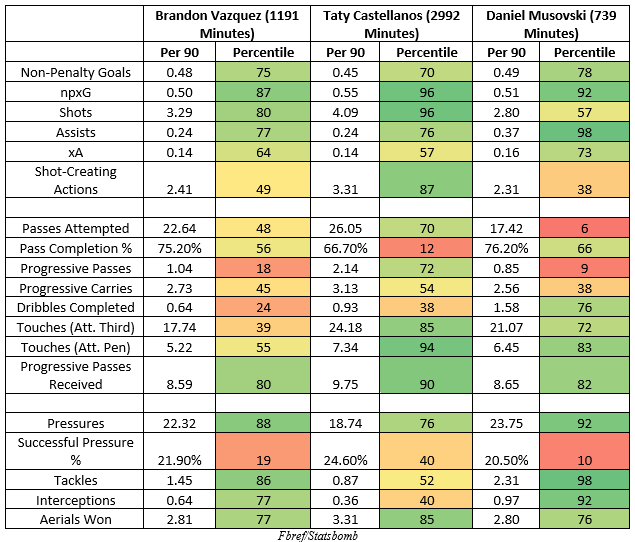 First off, the minute differences between the three players are dramatic. Castellanos is an elite attacking player in MLS and proved that quality time and time again over nearly 3,000 minutes in the last year. Musovski played just 739 minutes in the last year for LAFC. Vazquez’s nearly 1,200 minutes provide us with a larger sample size but at the same time, some caveats. It’s enough game time where we can start thinking about drawing larger conclusions but small enough that it’s still impacted by variance from appearances off the bench where the game state leads to more attacking opportunities.

Vazquez has been really good for FC Cincinnati over the last year though he hasn’t started many games. So is Vazquez’s production more similar to the reigning MLS Golden Boot winner Castellanos? Or more similar to another young American striker who just seems to be running hot in limited opportunities? The uninteresting answer is that Vazquez probably falls somewhere in between the two. But let’s dig deeper into Vazquez’s play over the past year.

Another caveat before diving in: Nearly 1,200 minutes is enough to draw some conclusions but, as you’ll see, I’m about to chop that already small sample size into even smaller samples, making everything more volatile. Still, I think there’s some interesting stuff to see.

Starting vs. Off The Bench

Vazquez didn’t really get much of an opportunity to start until the end of the 2021 MLS season. He was used frequently as a late game substitute by Jaap Stam in matches when FCC pushed for late goals. Vazquez didn’t get his first start of the 2021 season until September 15, in a 4-0 drubbing on the road in Atlanta. He returned to a role coming off the bench until October 20 when he started against the Chicago Fire and then went on to start the remaining four games of the season.

As a starter, Vazquez’s 0.31 xG/90 would put him slightly below average for MLS strikers (0.35 npxG/90). As comparisons, in 2021, Ricardo Pepi produced 0.39 npxG in 2,092 minutes and Daryl Dike posted 0.29 npxG in 1,320 minutes in 2021. Yes, both of those players are younger than Vazquez but both were scooped up by European clubs for huge transfer fees. So for Vazquez, with over 2,800 career MLS minutes, slightly below average should be a pretty acceptable level of production. His strong start in 2022, playing in a more coherent offensive system under Pat Noonan, should make FCC supporters more optimistic about what’s to come.

Side Note: I’m pretty sure Vazquez’s xG numbers should be higher for 2021 but Football Reference appears to have logged the last two games of the season wrong. In those matches, Vazquez took a total of three shots but was not credited with any xG. None of the chances were huge scoring opportunities but their inclusion would slightly improve Vazquez’s xG overall and as a starter. Also, I mainly use xG in describing Vazquez but that is comparable to all the instances of NPxG throughout the rest of this piece because Vazquez hasn’t taken a penalty for the Orange and Blue yet.

Vazquez’s first three matches of 2022, when added to his starts last season, put him back in very solid company among MLS strikers in terms of goal creation production. In 757 minutes as a starter across 2021 and 2022, Vazquez’s 0.54 xG/90 is very close to Castellanos’ 0.55 xG/90 total.

Vazquez’s 3.45 shots per 90 would be very promising, especially for a team like FCC that has struggled to produce good looks. Vazquez is getting more shots this season because there are more opportunities with a coherent attacking plan under Noonan. Last season, either coming off the bench or starting, Vazquez demonstrated an ability to find dangerous spaces and he’s thrived so far in moments of transition in 2022. His shot chart, per Wyscout, shows an ability to find the ball in dangerous areas. Note: the chart includes USL matches as well. 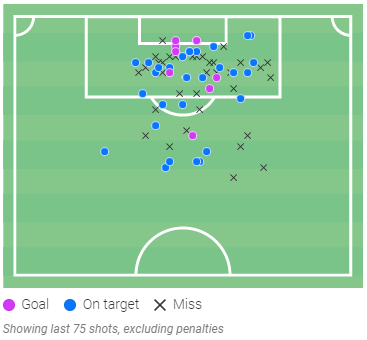 The combination of Vazquez’s strength, his ability to make smart runs, and playing alongside teammates, like Lucho Acosta, who can get the ball to him in dangerous areas, means shots and goals should continue to come. Even though he doesn’t appear to be an elite finisher (to the extent that those actually exist), getting into advantageous positions will still mean goals. Noonan’s preference for a two striker system should also guarantee minutes for Vazquez, so the opportunity shouldn’t be an issue either.

You can absolutely make an argument that Vazquez’s hot start to 2022 skews his numbers to an unrealistic point. Some part of that is likely true. It’s simply unrealistic to expect Vazquez to continue producing at an elite level based on everything we know so far. If he does keep this pace up, we’ll have to relitigate the previous regime’s talent identification abilities all over again. Even if Vazquez regresses to the mean over the course of 2022, we should feel better about where he’ll end up in the tiers of MLS attackers. If at the end of the 2022 season, Vazquez has cemented himself as an above average MLS striker in terms of goal creation, he’ll represent another extremely useful piece for the Orange and Blue as the roster rebuild continues.

Over nearly 800 minutes as a starter, Vazquez has gotten into goal scoring positions at the level of elite MLS strikers. FCC’s attacking system as its currently constructed should continue to put Vazquez in positions to succeed. Though there are elements of his game that aren’t up to the level of other elite forwards, Vazquez’s ability to be dangerous seems less and less like a fluke with each passing week.