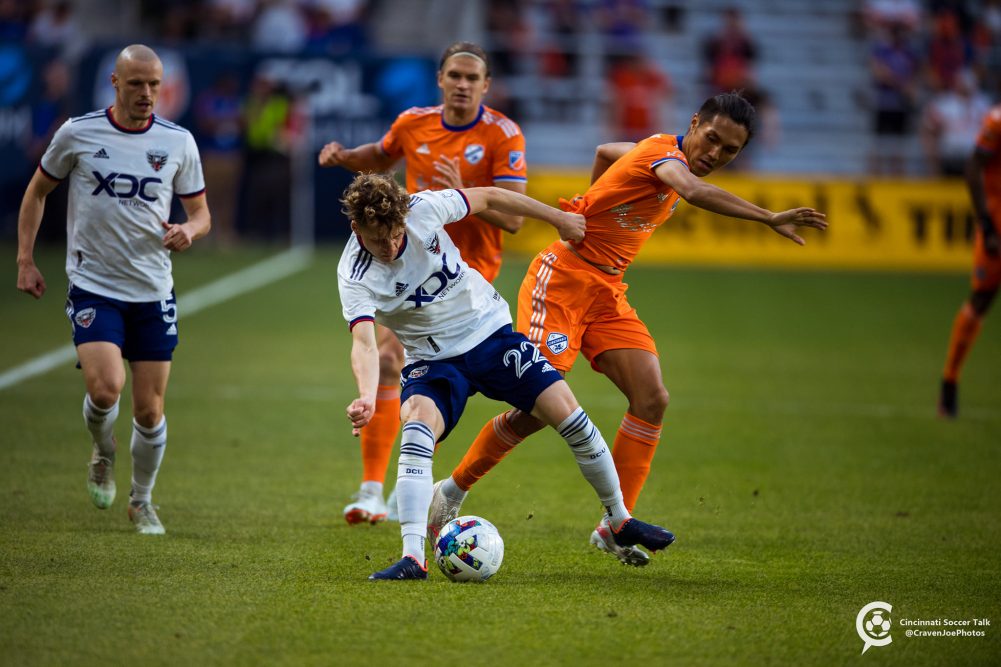 FC Cincinnati has several players finding their grove in space. Nate digs into how each is succeeding thus far in 2022

FC Cincinnati notched a second win in a row, defeating Inter Miami CF 3-1 on Saturday night in a game that didn’t feel as close as the scoreline. The Orange and Blue controlled the majority of the match, limiting Miami to just two shots on target including a first-half penalty. Now, Miami doesn’t look to be a very good MLS team but the week-over-week improvement by FCC is still promising. Will there be setbacks and poor performances in the future? Almost certainly. But FCC supporters should be encouraged by the quality on both ends of the field so far in 2022.

I devoted a lot of words trying to make sense of Brandon Vazquez’s recent form last week and Saturday did little to slow the hype train down. His two goals plus an assist and a drawn penalty made him the obvious choice for Man of the Match.

Through four MLS matches, Vazquez is tied for the league lead in goals, shots, and non-penalty expected goals. Saturday’s brace gives Vazquez seven goals in 846 minutes as a starter over the last two seasons.

Each successive match Vazquez continues to build a very good MLS striker resume, especially when you remember he’s just 23 years old. After Brenner subbed on for Dom Badji in the 66th minute, we saw some glimpses of what a Vazquez-Brenner partnership could look like. This is not to diminish Badji’s contributions this season at all, but Brenner adds a different dynamic, one that should help unlock additional avenues of attack.

Take the lead up to Vazquez’s drawn penalty. Brenner intercepts an errant Miami pass, lays it off to Lucho Acosta with one touch, makes a forward run receives the return pass up-field, and then slots the ball through two Miami defenders to Vazquez. Brenner nearly scores after the foul too but his shot was blocked by a defender.

Brenner took two touches in the lead-up to the penalty. Neither touch could be classified as difficult per se but Brenner made the right decision each time and played each pass with the correct weight to take advantage of attacking opportunity in transition. The Badji-Vazquez partnership has been solid, but Brenner brings a different dynamic, one that should help unlock additional avenues of attack. A Vazquez-Brenner partnership alongside Acosta should continue to create chances going forward. Given what Vazquez could be, a very good MLS striker, and Brenner’s potential, FCC’s front line should continue scoring goals.

Rónald Matarrita returned to the field against Miami and quickly demonstrated how much value he can provide, especially going forward. Matarrita’s goal and his two assists show how well he fits into the narrow formations Pat Noonan has favored so far. On the opening goal, because Matarrita was attacking from deep and Miami right back DeAndre Yedlin was occupied by Badji’s more advanced run, Matarrita found space in the penalty area to receive the pass from Vazquez and get his shot on frame.

Matarrita consistently provided a field-stretching option on the left, relieving congestion in the middle of the field. He pushed the game forward with the ball at his feet too, leading the Orange and Blue in progressive carries on the night while his seven progressive passes were tied for the team high. 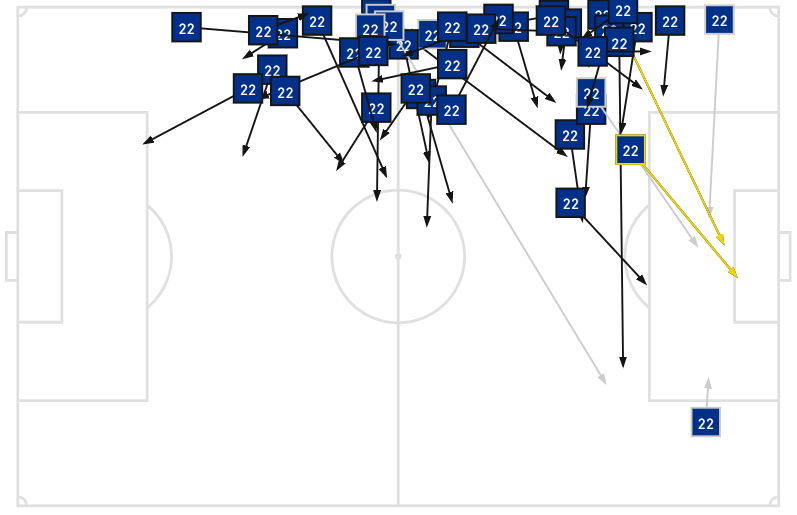 Both assists showcase what Matarrita can provide on the left. His first assist came on a pass he should have ample opportunity to play this season: a cross from wide on the left under little pressure because up until one pass before, the ball had been on the other side of the field.

Matarrita’s second assist came from a position he seems to love being in: the half-space. Even when Matarrita played with an inverted winger ahead of him like in much of the 2021 season, he drifted narrower to playmake. In the 82nd minute, Yuya Kubo found Matarrita in the half-space while Miami’s defensive line was retreating, leaving him time to take a touch before playing a ball towards the back post where Miami’s 5’9” left back Noah Allen was marking 6’2” Brandon Vazquez.

How Noonan chooses to replace him this weekend when Matarrita is on international duty with Costa Rica is a big factor in the next match. Ray Gaddis was solid at left wing vs DC United. This may allow Noonan to continue with the three center back setup, assuming Gaddis’ return to fitness. Alternatively, Noonan could opt for a four-man defensive line, calling on Tyler Blackett to play left back as he did in the second half of the Orlando City match.

Despite Noonan approaches to the next match, Matarrita was put in positions to impact the game. Giving Matarrita time and space to operate should only mean good things for the Orange and Blue’s attack as the season progresses.

Yuya Kubo has so far thrived in 2022 in Noonan’s tactical system. Paired with Junior Moreno, Kubo has more freedom to get forward, moving the ball into dangerous areas. Against Miami, Kubo’s four carries and nine passes into the final third led the Orange and Blue, according to Football Reference. As Lucho Acosta is spending more time higher up the field, prepared to run at defenders in transition, Kubo has taken on more ball progression duties from midfield. Against Miami, Kubo did lots of that progression with the ball at his feet. After all, he is a converted winger so given space, Kubo was able to drive at defenders running towards their own goal.

The number of times this game Kubo got out of congested central areas through his dribbling- the benefits of converting an attacker with high dribbling output to central midfield pic.twitter.com/3ZezJzrDUC

Kubo was influential in the attacking half as well. He found space between Miami’s defensive lines, and frequently because the ball had already advanced beyond him, he would often receive it while facing towards the goal, with a full view of the attacking picture. Miami didn’t press Kubo on the ball with much success so Kubo usually had time to find the correct pass. His pass chart against Miami shows the time and space he had to spray the ball around, switching the point of attack. 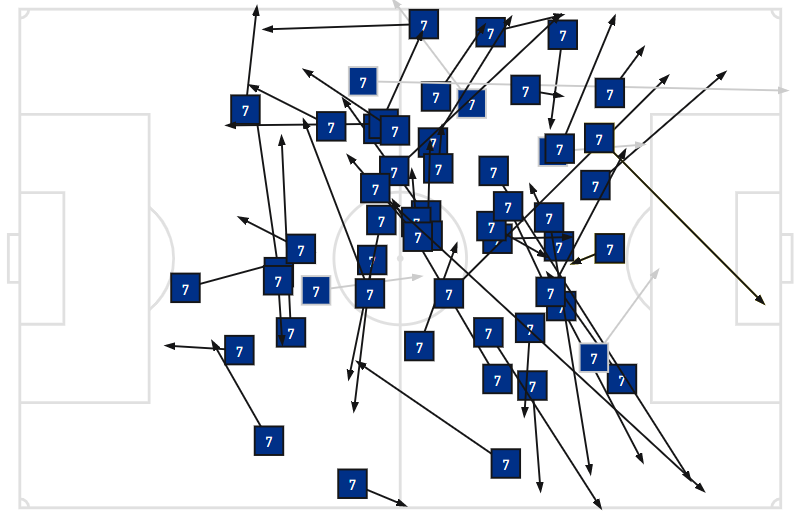 As an example, take this sequence from the 16th minute. The move starts with Tyler Blackett bursting up the left side before finding a pass to the feet of Brandon Vazquez in the final third, bypassing the midfield. Vazquez received the ball but with his back to goal and defender closing him down. Unable to turn, Vazquez laid the ball back to Kubo who had drifted into a pocket of space. Kubo received Vazquez’s pass facing Miami’s goal and with time to assess all the options in front of him. Instead of attempting to break Miami’s defensive block, he opted to switch the point of attack, finding Alvas Powell on the right wing. Nothing ended up coming from this attack but the ideas seem to be the right ones. 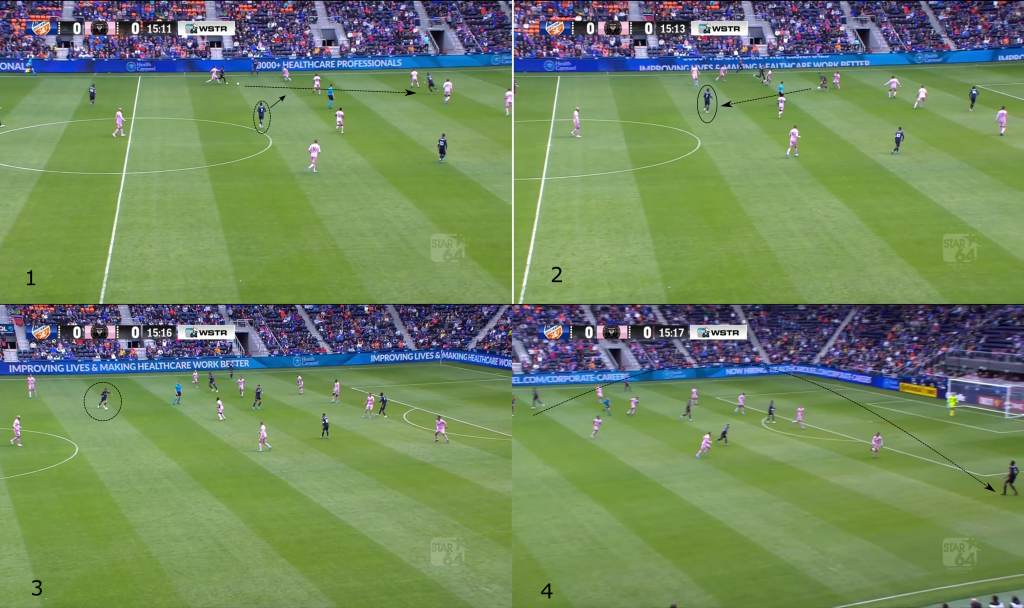 Contrast this set-up with last season. In 2021, Kubo was often in situations where he was receiving the ball with his back to the attacking goal, and frequently, in his half. Kubo showed an ability then, and to be clear, still does, to play on the half-turn but getting the ball to a player with the technical quality of Kubo in positions where he can dictate play is a good offensive strategy. Noonan has talked about putting FCC’s players in positions to succeed. Getting Kubo on the ball in situations where he can make plays from deep is a good use of his abilities.