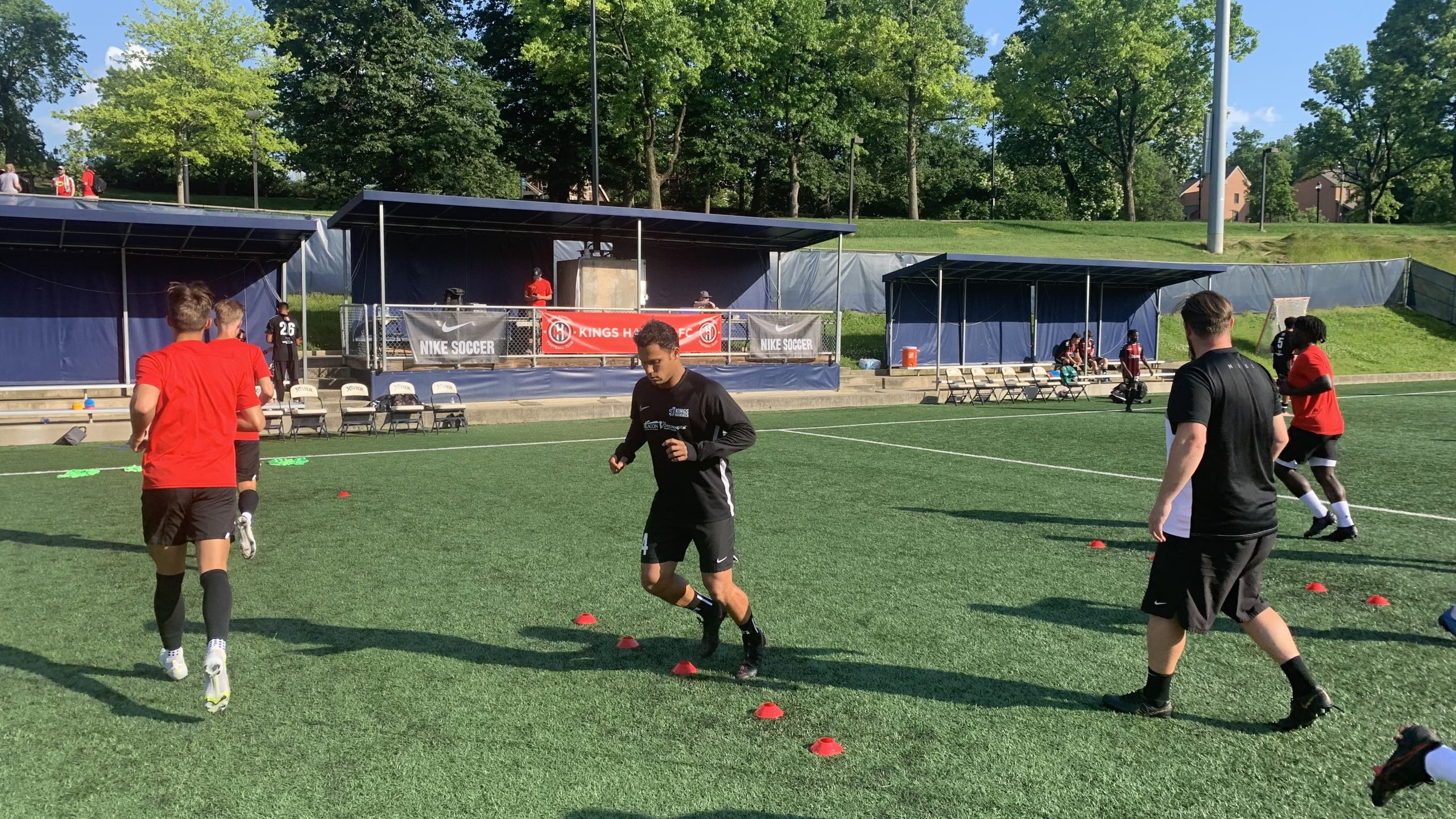 With a win at Kalamazoo on Wednesday, Kings Hammer FC can start a run to the Great Lakes Division title.

It’s time for Kings Hammer FC (5-1-3) to head back out on the road again. This time, it takes on first-place Kalamazoo FC (7-1-3). Kalamazoo is the only team to put a checkmark in KHFC’s loss column this season. Wednesday night’s matchup is huge for both sides.

A victory for Kings Hammer would even up the series at one game apiece and more importantly, would put the second loss in Kalamazoo’s record. Is it a must-win? Not to put any unneeded pressure on the boys as they head out on the road but yes, they need to even the season series against K-zoo.

Brown putting in the work

Jared Brown has been putting in some solid work in net for Kings Hammer. Brown has 26 saves on the season, including two crucial saves in KHFC’s match against Oakland County this past weekend to secure the three points for Kings Hammer.

His toughest outing on the season was against the same Kalamazoo squad that KHFC is taking on. It’s a chance for Brown to show that the first matchup was an outlier. Kings Hammer also played the majority of that match down a man. The expectation would be to see Brown put on a performance similar to other clean sheets this season. Against South Bend, Brown had seven saves and a clean sheet.

One thing that appears to be haunting Kings Hammer this season is late goals. In the two of the three most recent matches, Oakland County and Flint City, goals were given up after the 89th minute.

The KHFC coaching staff was not happy with giving up the last-minute goal in either of those matches because it needs to start finding a way to add to its goal differential. Kalamazoo currently sits at +11 on the season while KHFC is at +3.

While a tie would keep Kalamazoo close to Kings Hammer, a win by KHFC gets it closer to Kalamazoo. A win puts it in a position with two matches in hand to make a run at the division championship. The last matchup against Kalamazoo got away from Kings Hammer quickly after it had gotten out to a 2-0 lead.

Roberto Burlew and Timmy Ennin scored the two goals that gave Kings Hammer a two-goal lead in the first matchup. Ennin’s two yellows in the 35th minute, leading to his ejection that began the downhill slide for Kings Hammer.

Two goals by Cyrus Harmon, who came on in the 39th minute, and goals by Lara and Martinez gave Kalamazoo four goals on the day and the victory in their first matchup. The 4-2 victory spoiled the home opener for Kings Hammer FC, who played fairly well despite the scoreline.

Take a look, he’s in the book

Kings Hammer has 23 yellow cards total on the season. The league website is showing 22 at the time of the article, but Timmy Ennin is showing zero when he should be showing one yellow and one red.

Physical play is expected from coach Paul Nicholson.  That doesn’t mean earning yellow cards is a good thing, but a number of the yellows that KHFC has on the season were for physical challenges on the ball.

The expectation should be that Kings Hammer will look to outmuscle Kalamazoo FC early on in this week’s match. While both teams have made some changes since their first matchup, one thing will stay the same for Kings Hammer —  the will to not be outworked or underprepared for this match.

When talking with Brandon Ponchak, USL Soccer Operations for Kings Hammer, I asked, “Is it safe to say the team has been looking forward to this matchup since the whistle blew at the end of the first match against Kalamazoo?”

His reply, “Yes. Anytime you drop points at home and had the lead, it would be great to get those points back.”