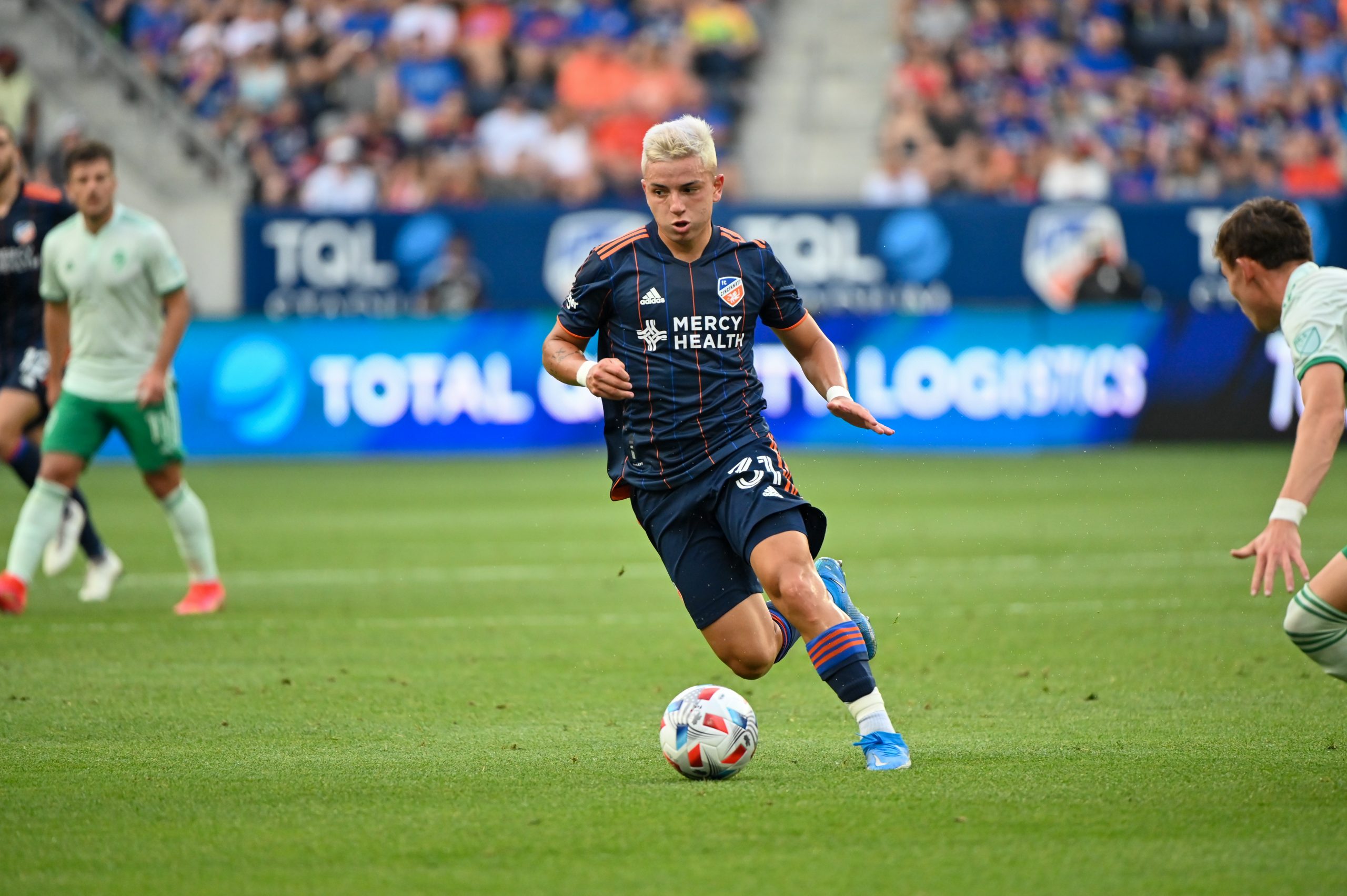 Alvaro Barreal scored on a free kick in the 50th minute, and FC Cincinnati survived a late attack from Chicago Fire FC for a 1-0 victory Wednesday at Soldier Field.

While FC Cincinnati has not managed a win in its first three home games of the season, the away record is another beast altogether.

The Orange and Blue hammered away at Chicago’s defense the first 45 minutes before a 50th minute direct kick by Alvaro Barreal made the 1-0 difference at Soldier Field on Wednesday. FC Cincinnati (12th place, 2-1-5, seven points) survived a late goal wiped out by VAR to hand the Fire (14th place, 1-1-7, four points) their third-straight loss.

FC Cincinnati had lost its last two matches but managed a 2-1 comeback victory against CF Montreal the last time on the road. Chicago’s season had resembled FC Cincinnati’s going into the match, managing only one win and one draw in eight attempts. However, both of Chicago’s positive results came at home before Wednesday’s match.

FC Cincinnati came out with heavy pressure on Chicago’s defense to start the game. FC Cincinnati poured seven shots on goal in 22 minutes before Chicago managed its first shot. Brenner and Geoff Cameron enjoyed two good early shots, but both were snuffed out by goalkeeper Bobby Shuttleworth, who managed 11 saves in the match.

Once the early momentum was halted after 25 minutes, the Fire enjoyed prolonged possession in the attacking third, taking the next four shots while keeping FC Cincinnati out of its end. Chicago’s first real threat came in the 26th minute, but Luka Stokanovic’s free kick outside the box sailed high of the net.

For most of the first half, FC Cincinnati’s pressure forced Shuttleworth to stand on his head. The Fire goalkeeper’s best save came in the 42nd minute, flicking away an off-footed drive by Brenner from his right.

FC Cincinnati’s intrusive first-half play resulted in a rare advantage in offensive numbers, taking 14 shots and nine shots on goal while Chicago only managed six with none on net. However, the score remained 0-0 after 45 minutes.

The second half started with the Orange and Blue finally busting the dam open in the 50th minute. After a foul on Brenner outside the penalty area set up a set piece, Barreal twisted a left-footed curler around the four-man wall and off Shuttleworth’s diving hands to make the score 1-0. The goal was FC Cincinnati’s first from outside the 18-yard box this year.

After the goal, Chicago took clear control of the play. Stokanovic had the clearest look on goal in the 60th minute, as the ball encountered a scrum in the 6-yard box, but his shot clattered off his own teammate, Robert Beric. Kenneth Vermeer then cleared out an easy tap-in attempt by Beric and smothered a follow-up shot by Ignacio Aliseda in the 64th minute, keeping the clean sheet alive.

FC Cincinnati played most of the second half in a defending mode, countering only when necessary. Substitutes Jurgen Locadia and Brandon Vazquez had opportunities on breakaways in the second half, only for Shuttleworth to charge out of his box and do enough to cut down the angle.

Chicago had thought it had its late equalizer in the 92nd minute. A deep cross into the box deflected to Beric for an apparent goal, but VAR analysis showed that Beric had snuck offside before the goal. Both sides played choppy offense back and forth until the final whistle, with FC Cincinnati getting its first clean sheet of the season.

The win brings FC Cincinnati’s away record to 2-1-2 and Chicago’s home record to 1-1-3. The Orange and Blue’s win propels them into 12th place and gives them momentum for another bottom-of-the-table matchup on Saturday against 13th-place Toronto FC, who lost to Nashville SC 3-2 on Wednesday.