Ryan Sparks adds a personal touch to his look at Kings Hammer FC’s trip to the Flint City Bucks on Saturday.

What brought me to writing at Cincinnati Soccer Talk is a passion for soccer at all levels. I especially love watching amateur soccer. Players that in some cases are trying to make a name for themselves and in other cases are playing for the love of the game or to represent their school or community.

I have an immediate connection to Kings Hammer FC because to be honest, I have friends involved in the project. My son is training with KHFC’s USL Academy team. During the years, I’ve gotten to know Paul Nicholson and Brandon Ponchak very well. We’ve broken bread together and shared a pint or two over the course of time. Our kids have played together.

There’s a personal tie to their success. It’s one of the reasons I’ve tried my hand at play-by-play during the webcasts of home matches. I want “lower-level soccer” to be successful in my hometown. I’m proud of the work that my friends have done to make this club a reality, and hopefully, they’ll excuse me as I go a little off the deep end before the Bucks away match this weekend.

To say that every match from here on out is a must-win match for Kings Hammer FC might be a little dramatic. Let’s add to the drama. I hate the Bucks. I know I’m going to get called out because of their successful history and them being the reigning champs. I just don’t like them. It could stem from their coach insulting fans in Cincinnati in the past, but yeah I do not like them or hearing them laugh about Cincinnati being a “soccer city”.

Where Have You Been

For those of you that have attended matches so far, the club has expressed its appreciation. I know I’ve commented on broadcasts and I’ve even sent out tweets myself thanking people for attending.

For a city that claims to be “the hotbed of American Soccer”, Cincinnati soccer Fans, what’s keeping you from attending matches? It can’t possibly be the price point ($10 or less a match) or the venue (Xavier’s Corcoran Field, which puts the fans right on top of the action).

Is it because your kid plays for a different club?

I can understand that actually, but I’ll challenge you by saying the Kings Hammer USL Academy team is made up of young men from clubs all over the city. A number of them will be returning to their high school teams in August and their other local clubs for next spring. This club is helping develop the game in our city at all levels and even at other clubs.

Here’s an offer for you, because you’re taking the time to read my rant: Use the coupon code CSTKHFC and save 10% on your ticket purchases for the remainder of the season. Get your tickets HERE.

Kings Hammer FC sits at  3-1-2, and since I’m out here challenging the fans, I’ll challenge the players. You’re better than fourth place! This roster is better than the two ties against Toledo (3-1-3) and Flint City (3-0-2). Surely you see it in each other, right?

I see it during broadcasts, and I’ve seen it in the training sessions that the club has so graciously let me attend. This team is a talented bunch that is better than any USL League Two side ever represented this city.  The roster, truly, is stacked from top to bottom. It’s time to show the league what you all have on this roster!

‘On the Road Again’

This team has played extremely well on the road. All three victories this season for Kings Hammer FC have been on the road (Dayton 0-6-0, Oakland County 2-2-2, and Grand Rapids 1-1-4). A win at Flint City would be a huge step towards a shot at the Great Lakes division title.

When the Bucks and Kings Hammer met back in May, the teams drew 0-0, but the Bucks controlled the majority of the possession. Each team saw four yellow cards in the first match as well.

Saturday’s 7:30 p.m. match against Flint City should be just as physical at Kettering University.

‘Put Me In Coach’

‘A Little Help From My Friends’

Winless Dayton travels to Kalamazoo to take on the division leaders in a match that Kings Hammer needs Dayton to win. Not only would a win give Dayton its first three points, it would also keep Kalamazoo FC from getting three more while it sits at the top of the table. A tie even helps out the Kings of the Queen City in this case. 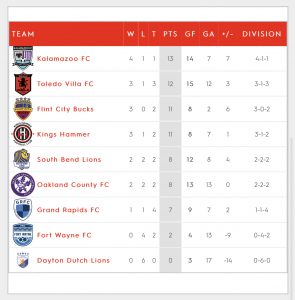 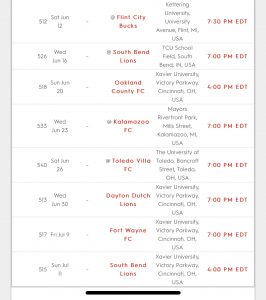