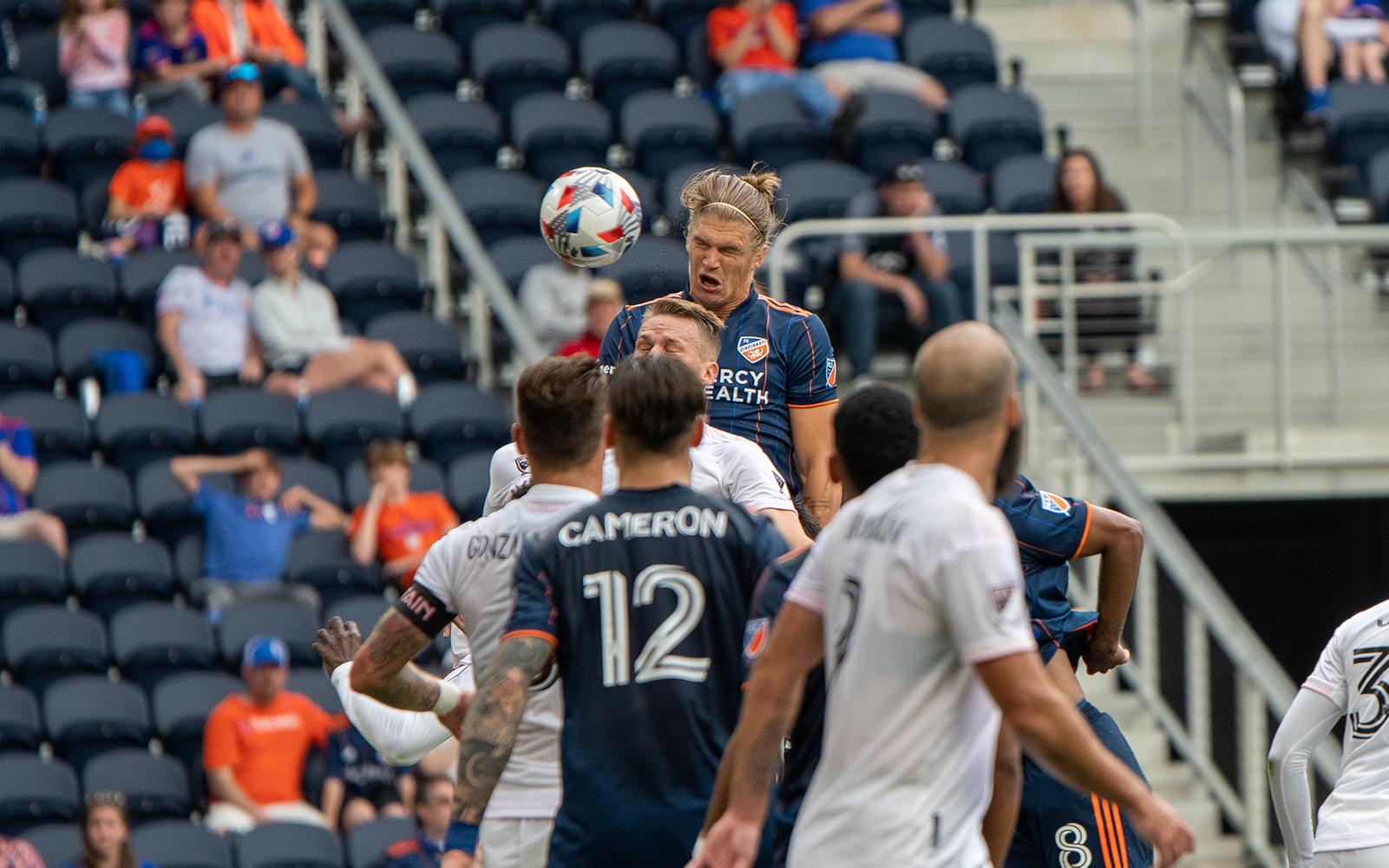 So much of sports is magic and mythology. That’s why we watch sports movies that dramatize events and successes that we would like to see in real life. Whether that’s Rudy’s Notre Dame teammates carrying him off the field on their shoulders, the Titans fourth-quarter comeback to win the state football championship, or the guaranteed to make any grown man cry classic Field of Dreams.

But sometimes what we get on the field is just a little better than what we can hope to pay for at the box office. Sometimes the underdog really does pull off the impossible dream, sometimes Texas Western really does overcome racism as well as Adolph Rupp’s basketball powerhouse, and sometimes the hometown kid really does create a little magic.

Austin Berry and Nick Hagglund know all about hometown magic — they know what it means to be from Cincinnati and succeed for the kids in the stands who could be them one day. Two center backs, both born and raised in Cincinnati. They achieved their dream of playing in MLS and found themselves back in their hometown to play for a new professional soccer team.

Both scored in inaugural home matches for FC Cincinnati. Does anyone know a Hollywood film producer?

“I kind of blacked out a little bit,” Hagglund said describing what he felt after he scored. “I didn’t really know what, you know? In a perfect world, I would’ve jumped into the Bailey but I would’ve gotten a yellow card.”

The photo of Hagglund, blacked out and screaming feet away from hundreds of FCC fans, has quickly become iconic in Cincinnati. “I just wanted to celebrate with the fans who were right there,” said the Lakota West graduate. “And the fans in Cincinnati, they mean everything to this club and for me, as a Cincinnati boy, that’s me in the Bailey, you know? So I just wanted to celebrate them.”

There was a lot of celebrating going around. Hagglund’s header had equalized the match and for that brief moment, it felt like a party in TQL Stadium. The first fans to ever grace those new concourses knew immediately how much it meant. While the Orange and Blue conceded the game-winning goal minutes later, that moment still showed the fight in this team and looms large as a stadium-opening moment.

It was particularly special for how unlikely it was. At that point, FCC had only earned a result after conceding first once before, over two years ago. And Hagglund didn’t even start. But his moment finally came, in the 78th minute.

“It was exciting, you know?” he said. “Every time you have an opportunity to step on the pitch, especially wearing a Cincinnati jersey.”

It only took him four minutes to put his name in the history books. The players came forward for a corner kick, losing by just one goal. “We didn’t have any set plays. At the time we had run through all our set plays,” Hagglund said. “So, for me, I just got into the back post. I saw a lot of space open up there. I made eye contact with Lucho (Luciano Acosta). He kind of made a nod to me and he lifted it up, and I just got a 10-yard run-up to smash the ball into the back of the net.”

What makes this all even stranger is just how similar it sounds to Berry’s goal, who also scored a header in front of the Bailey in the club’s first match at Nippert Stadium in 2016.

“I just made a good read on a ball in the middle,” the Summit Country Day graduate said recently of that goal. “I tapped it out to Jimmy (McLaughlin). It was just one of those plays. I was already going forward, I was already up there. (Coach John) Harkes never told me ‘no’ so I continued the run into the box. With Jimmy playing outside on the left, if you’ve played with him long enough — which some of us have — you know he’s going to cut back on his right and clip a nice little ball in. So I just found a little pocket and put it in.”

The similarities don’t stop there.

“And then that’s at the point where you black out and don’t really remember until you watch it on the highlights later,” Berry said.

The expectations and attention are vastly different now than they were in 2016, but that inaugural home match at Nippert was no less important. At the time, Berry and his teammates kept asking about ticket sales; they weren’t sure how many people would even be there for the home opener.

FCC has never lost that special home game feeling. It’s arguably the reason they’re in MLS today. Earning that bid required a thoughtful and detailed plan from the club and its owners, but it was that home atmosphere that turned heads and made expansion a reality. That’s the one constant between the crowds in Clifton and West End.

“The fans have been there from the beginning. I feel like this club is built on that,” Hagglund said. “That means a lot to everyone in this club. How much the fans and supporters care. We just appreciate everything that they’ve done for us. This is a foundation that we’ve built and we’re going to continue to build upon that.”

“Being the home opener was always something that was going to be special,” Berry said. “There was no way we were going to lose that game.”

What has happened in Cincinnati is rare. There aren’t many athletes in the world who get to play for their hometown team, let alone score in an inaugural home match for that team. And yet FC Cincinnati has seen it happen twice.

Jürgen Klopp, manager of Liverpool FC in the English Premier League, dreams about it himself. “We want to be a club where everyone with a Scouse soul wants to play,” he said. “The dream in the long term is that we have a team full of Scousers. Why not? They would fight like crazy.” (via ESPN.com)

A full lineup of local born players may never be possible in modern football, but even a club as big as Liverpool understands that the game, the moments, the goals, the fans, the wins, the meaning we assign to sports, and the mythology that’s created, all hit just a little harder when you’re able to do it at home. Sports are often shrouded in the mythology that those movies are so eager to manufacture. But one of the reasons we keep coming back to sports is that occasionally, if only rarely, that mythology becomes real. And for two brief moments, separated by some hard times, Berry and Hagglund made their hometown believe in miracles.