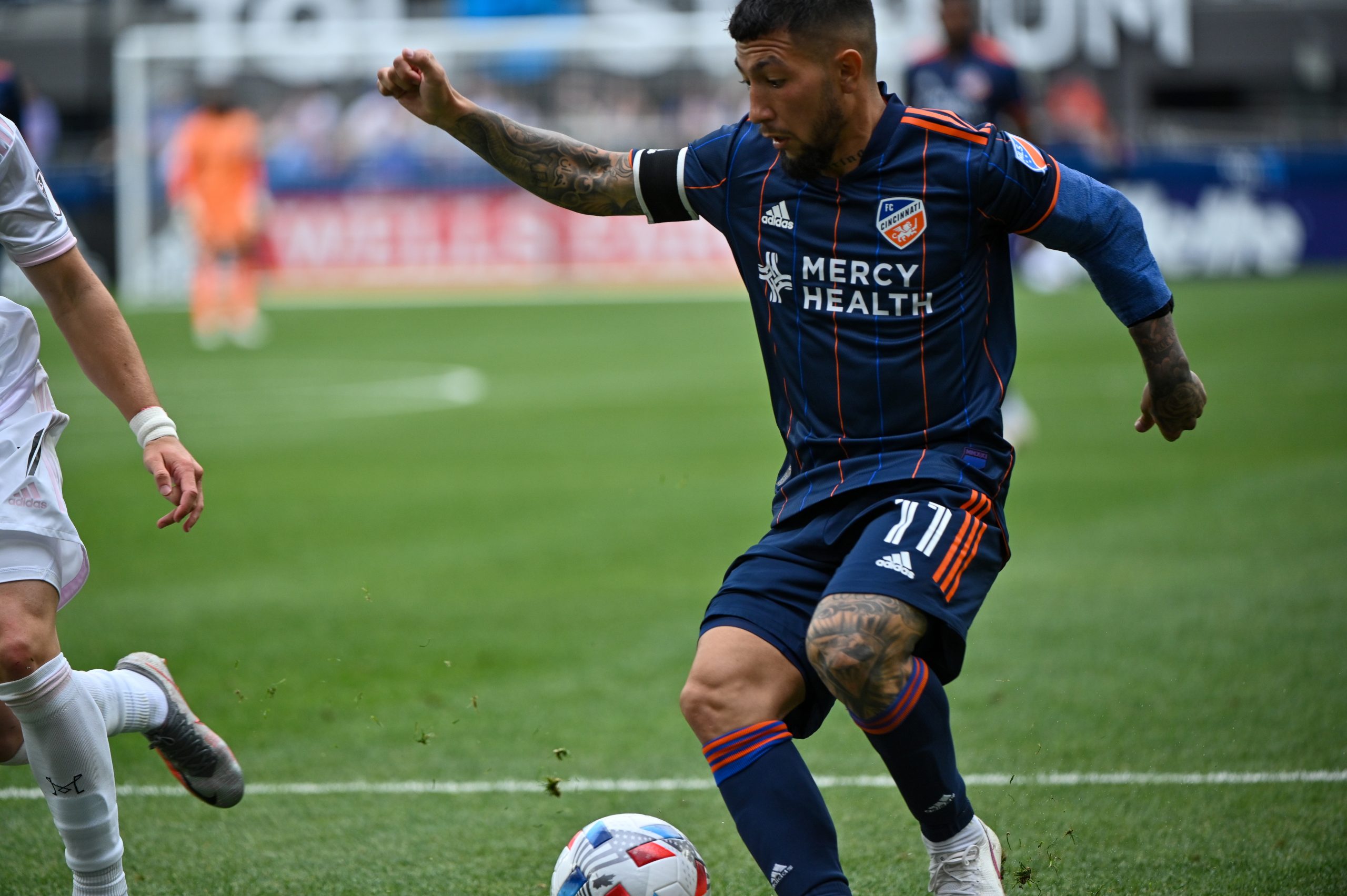 FC Cincinnati’s first on-field performance at TQL Stadium might be remembered for defensive mistakes leading to a tough loss to Inter Miami CF. Those errors shouldn’t be the whole story. Despite a return of just one point through the first four matches of the 2021 season, I’m going to argue Sunday’s match represents another step forward for coach Jaap Stam’s team.

Against Miami, FC Cincinnati kept the ball in more dangerous parts of the field. According to Football Reference, FCC had 194 touches in the final third of the field, by far the highest total so far in 2021. FCC completed passes or carries into the penalty area 11 times during the match, also the highest total of the season. Similar to the last match, the missing piece remains how to turn possession in more dangerous areas of the field into shots and goals.

FCC’s 11 shots came from an average of 20.18 yards from goal, whereas Miami’s 10 shots had an average distance of 15.9 yards. FC Cincinnati’s shots were clustered on the left side of the field, where Luciano Acosta and Rónald Matarrita worked well together, potentially signaling the start of things to come. Of FCC’s 11 shots, Acosta and Matarrita were credited with shot-creating actions on eight of them. As they play more together, their link-up play should improve, allowing for a number of options for getting the ball into the box. 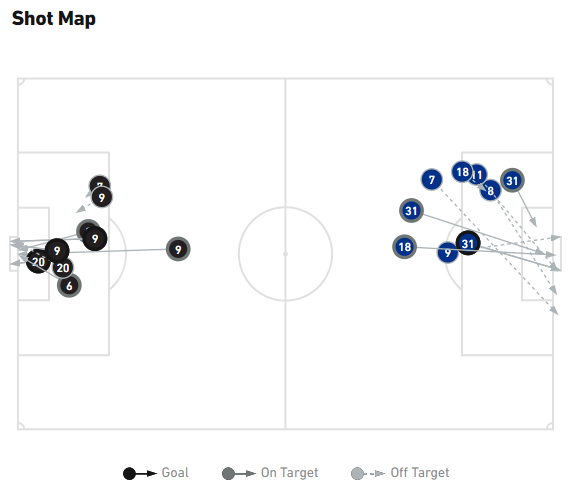 Acosta’s return to the starting lineup after dealing with an elbow injury paid immediate dividends to FC Cincinnati’s attacking efforts. Acosta pushed the team forward dribbling and passing with seven progressive passes and 13 progressive carries. Acosta also contributed four key passes, a team-high on the day. Acosta’s 71 touches were second on the team, trailing only Matarrita’s 78. Acosta’s presence on the ball and willingness to try to beat opposing players led to some losses in possession too. He lost the ball four times and miscontrolled three passes. However, Acosta showed he can take on opposing players with the ball too, completing 5 of 8 attempted dribbles. Acosta’s value on the ball outweighs the losses in possession, so long as the team is set up to cope with occasional turnovers. He should be counted on to be FC Cincinnati’s attacking talisman and can put teammates in positions to thrive.

Stam’s decision to swap Kamohelo Mokotjo for Allan Cruz to play alongside Yuya Kubo also had a positive impact both defensively and offensively. Cruz and Kubo combined for 43 pressures, 12 of which were successful, four tackles and two blocks. The two also contributed 14 ball recoveries. Offensively, the midfield double-pivot facilitated moving the ball into the final third, successfully moving the ball into the final third of the field 24 times during the match. For context, that’s as many final third entries as FCC had against New York City FC and seven more than against Nashville. In all, FCC completed 62 final third entries against Miami, by far the highest total of the season.

Inter Miami did not press FC Cincinnati as aggressively higher up the field as previous opponents. Miami pressured FCC in its own third just 21 times on Sunday, as opposed to 80 in the middle third of the field. That lack of a press shouldn’t be a surprise as Miami was playing its third match in a week as well as featuring the Higuain brothers, Gonzalo, aged 33, and Federico, aged 36. The new center back pairing of Gustavo Vallecilla and Geoff Cameron were pressured just six times when passing.

With the ball in the attacking third more than ever before in 2021, Brenner found the game more. Brenner received 23 of 31 passes, including eight progressive passes, highest on the team, providing an outlet up the field. Brenner’s 18 attacking third touches were the most he’s had in an FC Cincinnati jersey. Throughout the match, Brenner dropped deeper into the formation to pick up possession and didn’t end up back in a position to be on the end of plays. Of FC Cincinnati’s 15 touches in Miami’s penalty area, Brenner had just two. According to MLS’s passing network from the match, Acosta took up a more advanced role relative to Brenner. 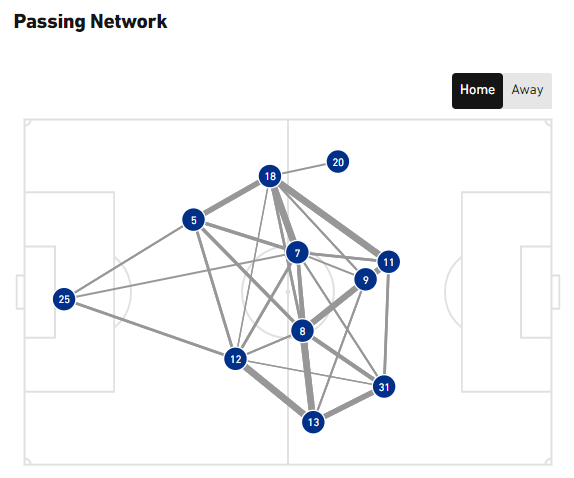 Getting Brenner more touches in the box and more shots remains the highest priority. More playing time with Acosta and the rest of FCC’s attacking talent should help. For FC Cincinnati’s attack to really take off, Brenner will have to find pockets of space in dangerous areas to receive the ball after contributing to the build-up. In contrast to previous matches, the Orange and Blue looked to emphasize attacking from wide. FCC attempted 19 crosses according to Football Reference, and Acosta was credited with hitting nine of those attempts. Coming into the match, FC Cincinnati averaged 6.7 crosses per match in 2021. Though none of the attempted crosses against Miami connected, utilizing width in the attack should pay off for FCC eventually, either leading directly to shots or by stretching opposing defenses to allow for better shots in the middle of the field.

Taking all of this together, a viable, repeatable attacking plan moving forward could involve Brenner helping in the buildup and Acosta, Matarrita and Calvin Harris creating an overload on the left side looking for attacking runs from Brenner and Alvaro Barreal, coming in from the right side of the field. That kind of a set up would maximize FC Cincinnati’s attacking talent and could lead to quality chances.

FC Cincinnati’s defensive performance was once again defined by mental lapses and costly mistakes. The continuing theme of mental mistakes leading to goals is very frustrating, and at some point, the question of why they keep happening needs to be asked. A positive interpretation would be that FCC started two new center backs and a new goalkeeper against Miami. A less generous one would argue these mistakes have plagued the team for much longer than the 2021 season.

However, looking at the entirety of the 90 minutes against Inter Miami, FC Cincinnati’s defense had one of its best matches. FCC limited Miami to 10 shots, by far the fewest by an opponent in 2021. Miami’s 117 touches in the attacking third and 15 touches in the box were also season lows for FCC’s defense. For context, coming into Sunday’s match, FCC’s opponents were averaging 25 shots, 186 final third touches, and 42.6 touches in the box.

At times, FCC’s press proved to be effective as well, generating turnovers in dangerous areas for Miami. FCC’s 62 pressures in the attacking third was a season-high. Of the 19 times Brenner pressed the ball, FCC won the ball back within 5 seconds nine times. Defending players tackled dribblers very well, successfully tackling 12 of 19 dribblers. As noted above, the addition of Cruz to the midfield helped defensively. Having two central midfielders willing to press the ball gives the FCC defense an edge they had so far lacked this season.

After four matches, it might be tough to keep reading that FC Cincinnati is improving because that hasn’t shown up in terms of results just yet. However, I think both the eye test and the stats agree that FCC is getting better. If FC Cincinnati can continue to improve, especially in and around the box, I think we can expect to see some more entertaining soccer at TQL Stadium this summer into the fall.