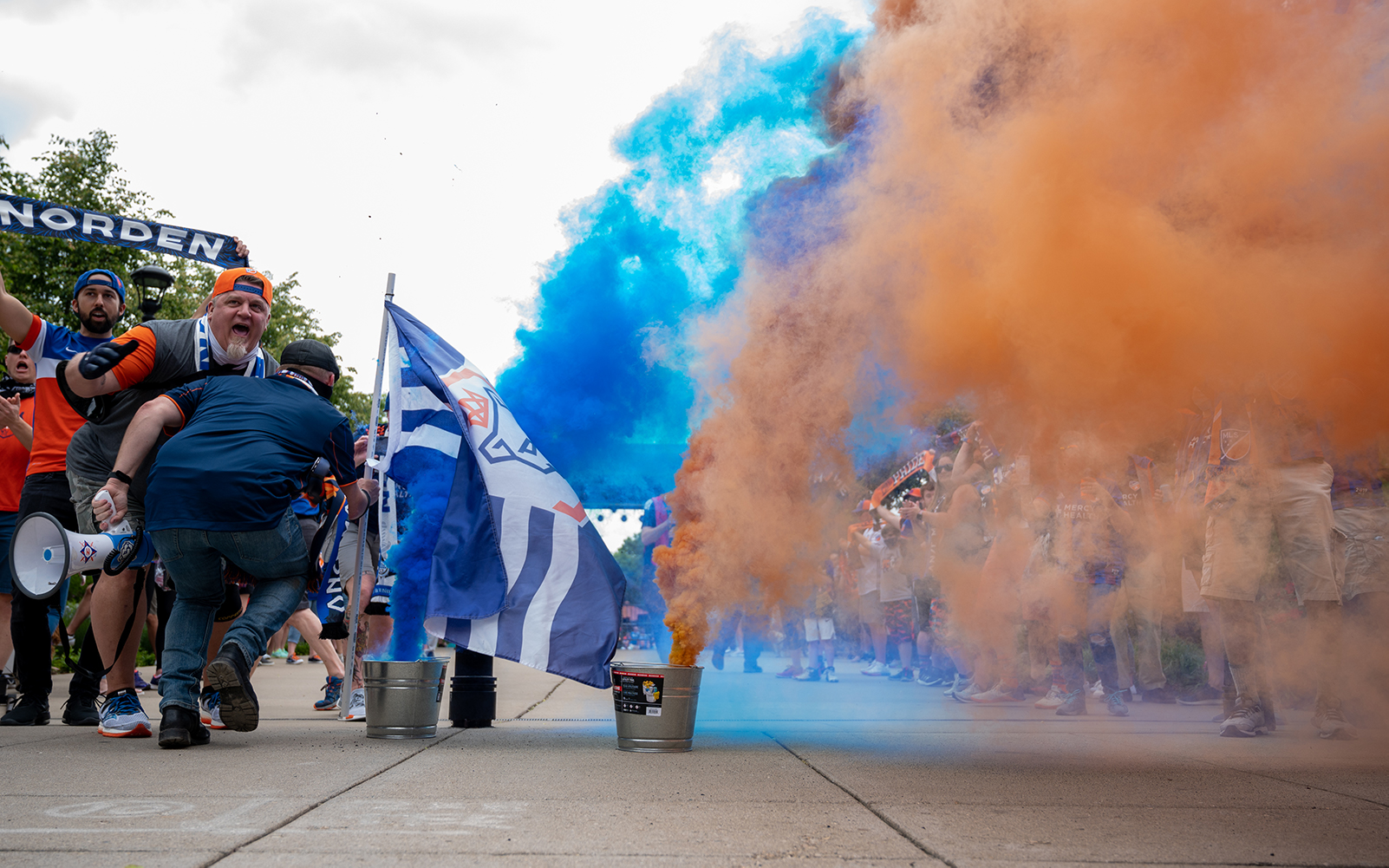 After being apart for nearly 20 months, Orange and Blue supporters got to experience a new matchday atmosphere together again.

The march wasn’t perfect. The stands weren’t full. The scoreline was backward. But FC Cincinnati fans are home, and that’s where the heart is.

FC Cincinnati began life in TQL Stadium on Sunday in a 3-2 loss to Inter Miami CF. But for one day, the scoreline wasn’t as important as a family reunion 20 months in the making.

Don’t get me wrong. We should be critical of the play on the field. We should, as Ken Hoetker so aptly put it, demand better. There’s merit in the debate about whether Jurgen Locadia should stay or leave or whether Joseph-Claude Gyau can be serviceable at right back. But that’s not what I’m here for today. What I’m saying is that Sunday was about more than the final score.

For those who don’t know much about me, I used to be a sportswriter. For the big games, I feel more in my element in the press box than in the stands. My time at Cincinnati Soccer Talk has allowed me to relive the adrenaline of deadline writing after matches, even though there’s no CST deadline. But for this historic match, with the COVID-19 pandemic keeping us all apart for what felt like an eternity, the only choice was to trade my seat in the press box for the fan experience.

We took so much for granted until the second week of last March — never again. It’s the fan camaraderie that separates FC Cincinnati from the Reds and the Bengals. The fellowship of seeing each other beforehand and marching together to our final destination. In the blink of an eye last year we were relegated to match watchalongs. While I’m appreciative of that experience, it wasn’t the same.

On Sept. 29 last year, a supporter — I forget who, but it was a fantastic video — put a link to a video of the home finale in 2019, marking a year since everyone was all together. Whether it was a year apart, the uncertainty at the time of when it would all end or something else, watching that video that day left me a little misty-eyed.

Heck, this time last year, I had anxiety about what would happen if I caught COVID to the point where I wanted a time machine to fast forward to 2021 to see if I was still alive. (I sought and received help, and the anxiety is in the rearview mirror.)

So reaching this day, when we could all see each other again, was what kept me going during the doldrums of 2020. And I know I’m not alone.

I was a little rusty. Do I greet people with a fist bump or an elbow tap? Are we back to a handshake? But it was so great to see folks I hadn’t seen in months. Some of the Die Innenstadt folks. My CST colleagues, who I hadn’t seen in person since our live show in Anderson Township with Alex Stec, just days — hours — before the soccer world shut down. Other than going to work Tuesday through Thursday of that week, that live show was the last thing I did before everything changed. It was also great to see the guys from the Old Man Ultras. I’m an Old Man Ultra fan, and you should be too. Their stories alone are worth the listen.

After the inaugural MLS home match, I wrote that the day was a soccer holiday. The days leading up to this felt like another holiday. Bryan Weigel described it as Christmas. To me it was more like New Year’s Eve.

It wasn’t the kind of holiday where the home team triumphed. FC Cincinnati didn’t own the day. The script wasn’t from Hollywood — there were no cheeky backheels, though climbing back from two goals down is something this club has never done in MLS. The electricity crackling through TQL was brief. But as Taylor Rockwell from the Total Soccer Show often says, things can be two things. We can still celebrate getting together again and still be unsatisfied with the result.

As far as the matchday experience goes, there will be some adjustments. Crossing Liberty Street with a full march could be an adventure. But it was great to see some West Enders take in the atmosphere during the march. So much is within walking distance. You can get just about anything you want from the Findlay Market area. Sam Adams is a great spot for Die Innenstadt, even if it is temporary. I’ve heard great things about Northern Row, so that’s on my list. Same for Queen City Radio and The Pitch. Taft’s and Rhinehaus are also great places. Wherever you go, you can’t go wrong.

Was the day perfect? Of course not. But it was just what the FC Cincinnati family at large needed — and that’s what the fanbase is, an extended family. It was a chance to come together again. That’s a holiday in my book.