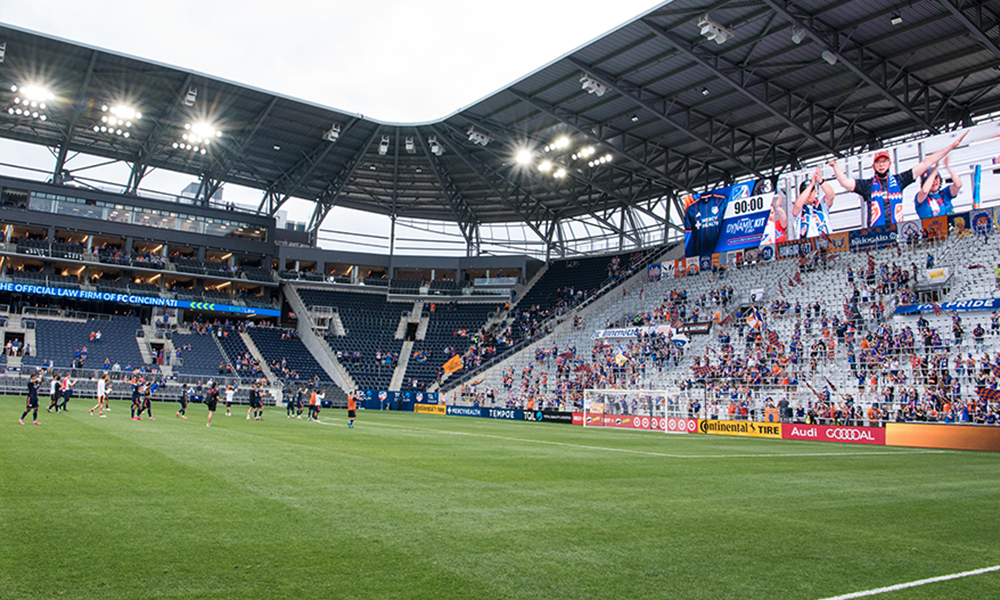 FC Cincinnati took its third straight loss, this time to Inter Miami CF, in the TQL Stadium home opener. FCC still only has a single point to its name after four matches this season, coming from the season opener against Nashville SC.

This match saw FCC make some improvements to both its backline and attack. The backline, and when I say that, I mean Gustavo Valecilla and Geoff Cameron, were both imposing and offered some pace to be able to get to the runs the previous backline wasn’t able to.

Geoff Cameron was a bright spot. Maybe not in terms of outstanding play but in his leadership. He was good but I wouldn’t say he was outstanding. His leadership was a light in the tunnel. He always seemed to be barking orders at players all across the field, which made me think that he could massively improve the team just by being on the field and telling people where they need to be.

However, the other parts of the backline, being Joe Gyau, Ronald Matarrita and Kenneth Vermeer, were not very good. Joe Gyau again showed why he’s not a great fullback, while Matarrita is still a liability. Then there’s Vermeer. The game should have been scoreless at the end of the first half. Both of the goals given up were shambolic and should have been easily saved by a goalkeeper.

The attack showed a lot of the money that was spent. Lucho Acosta was very good and got his passes in some very good positions for other players to attack. He continually showed great finesse to get away from defenders, but had a tendency to go against multiple players when that wasn’t needed. Brenner didn’t have a very good match all things considered. He had a couple of chances but mostly didn’t show much.

Alvaro Barreal was hot and cold. He had some outstanding looks, including the wonderful goal that opened the score sheet for FCC at TQL Stadium. But, he also had some head-scratching moments, much like Acosta, where he took on players where it wasn’t needed. Also, FCC scored a goal from open play and I didn’t know if that was going to happen for a long time, so that was very good for the confidence of the team.

Also, Allan Cruz had a massive improvement today. He did a very good job being reliable and being in good spots to allow himself to be helpful to his teammates. If this is the Cruz we might be getting, then he needs to be playing more often.

Set pieces were an improvement as well. Nick Hagglund almost scored the goal to give FCC its second positive result of the season until he gave a goal away on the other end of the pitch. It looks like both defending and attacking set pieces have gotten better in this match, but there are still too many moments where it looks like the team switches off in these spots, which cannot happen.

Also, the crowd certainly played a factor in FCC staying in this match. At the end of the first half, I felt like it was the last two matches all over again, where the team put its heads down and didn’t feel like playing anymore. However, coming out of the dressing room and hearing the crowd roaring and cheering them on, they soldiered on and came so close to salvaging at least a point from a match that looked over before the first half ended.

A loss is a loss no matter the score. It will still go on the team’s record as the same, even though this one looked competitive whereas the last two weren’t even close. But, I loved the fight in the team and that’s what I will remember from the match. The team fought to get to the end of the match, and the players fought for each other. I will take a season of 3-2 over a season of 1-0 every single day of the week. This offense is at least decent when its best attacking players are on the field and Cameron looks like someone who might be able to help the backline do better.