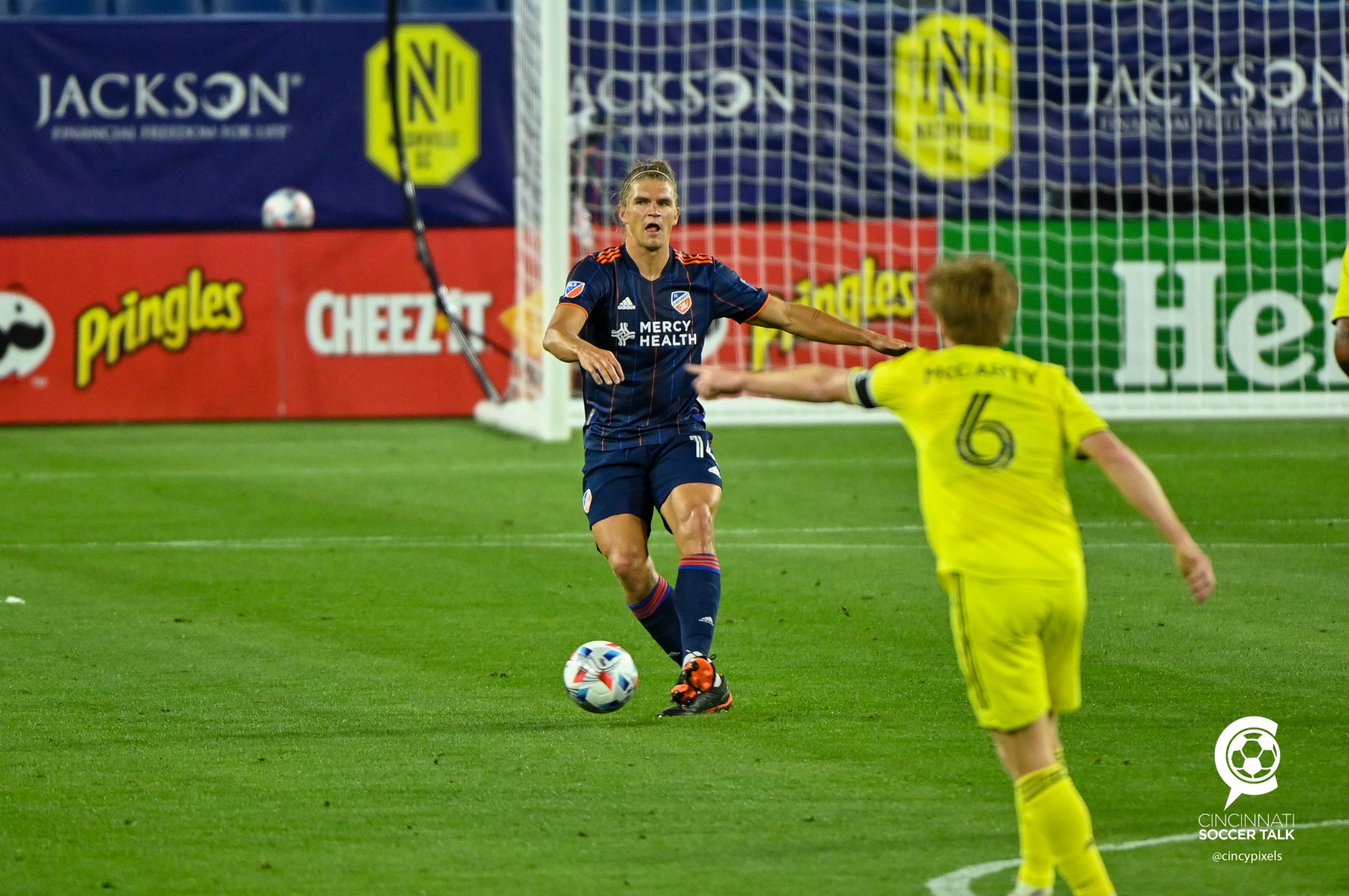 FC Cincinnati picked up a point Saturday at Nashville SC, but guest author Nate Gilman says despite the result, the club has some warning bells.

On its surface, FC Cincinnati’s 2-2 draw with Nashville SC on Saturday featured positives for the coming season. Record signing Brenner and new designated player Luciano Acosta both tallied their first goals for FCC. Maybe more importantly, FCC was able to earn a point on the road from a 2020 playoff team. The topline positives shouldn’t distract from what was pretty clear to those who watched the match: FC Cincinnati still has a long way to go. After digging deeper into the stats, it’s clear that FCC’s performance had much more in common with how the team played in 2020 rather than a new iteration.

Despite debuts from the aforementioned Acosta and Brenner as well as attack-minded Ronald Matarrita and Calvin Harris, FC Cincinnati still struggled to get the ball into dangerous areas of the field. Any regular follower of FC Cincinnati knows that those issues are nothing new. However, some context and numbers might be useful.

Against Nashville, FC Cincinnati successfully entered the ball into the final third 17 times, 6 carries and 11 completed passes, the lowest total in MLS in week one. FCC’s three successful entries into Nashville’s penalty area, one pass and two carries, also ranked last in MLS. The one completed pass into the opposition’s penalty area was Ronald Matarita’s assist to Lucho Acosta for the first goal of the season.

Nashville out-possessed FC Cincinnati, but not wildly so, certainly not by enough to explain Cincinnati’s lack of touches in the final third. FCC had 231 touches in its own third, 233 in the middle third, and 69 in Nashville’s third. Just 8 of those touches were in Nashville’s penalty area. FC Cincinnati’s front three were targeted with 107 passes and just 61 were completed. Brenner was targeted with 34 of those passes but he only successfully received 13.

Because FC Cincinnati couldn’t figure out how to move the ball forward and make it stick, they were exposed as Nashville pressed and countered in dangerous areas. FC Cincinnati was pressured 33 times in their own third and 58 times in the middle third of the field by Nashville. Those pressures paid off. Nashville won the ball back within five seconds of pressuring 38 of the 118 times they pressured the ball, 32% of the time. Despite Nick Hagglund and Tom Pettersson’s 28 combined clearances, surrendering possession in those areas is unsustainable. Nashville’s shot-cross equalizer might have been undeserved but overall, Nashville created 3.4 expected goals and 2.6 expected assists.

Now, I don’t want to overreact. One match is a very small sample size and it’s going to take some time for FC Cincinnati’s offseason additions to gel. There were certainly some positives too. Ronald Matarrita showed some of what he can bring to the side — creativity and an attacking outlet from left back. As he develops a rapport with whoever is playing on the left wing, whether it’s Calvin Harris or Jurgen Locadia, he should be able to contribute more and more in the attack. Luciano Acosta’s debut was promising as well. Outside of the goal, Acosta demonstrated that he can be FCC’s main threat to get the ball into the final third. Brenner got off the mark in his first match with an excellently taken penalty.

However, we can’t ignore that, by the numbers, this performance had lots in common with the 2020 FC Cincinnati. The result was better, and for stretches the team looked fluid and fun, but if this team is going to get better, we’ll be able to see it play out in the numbers.