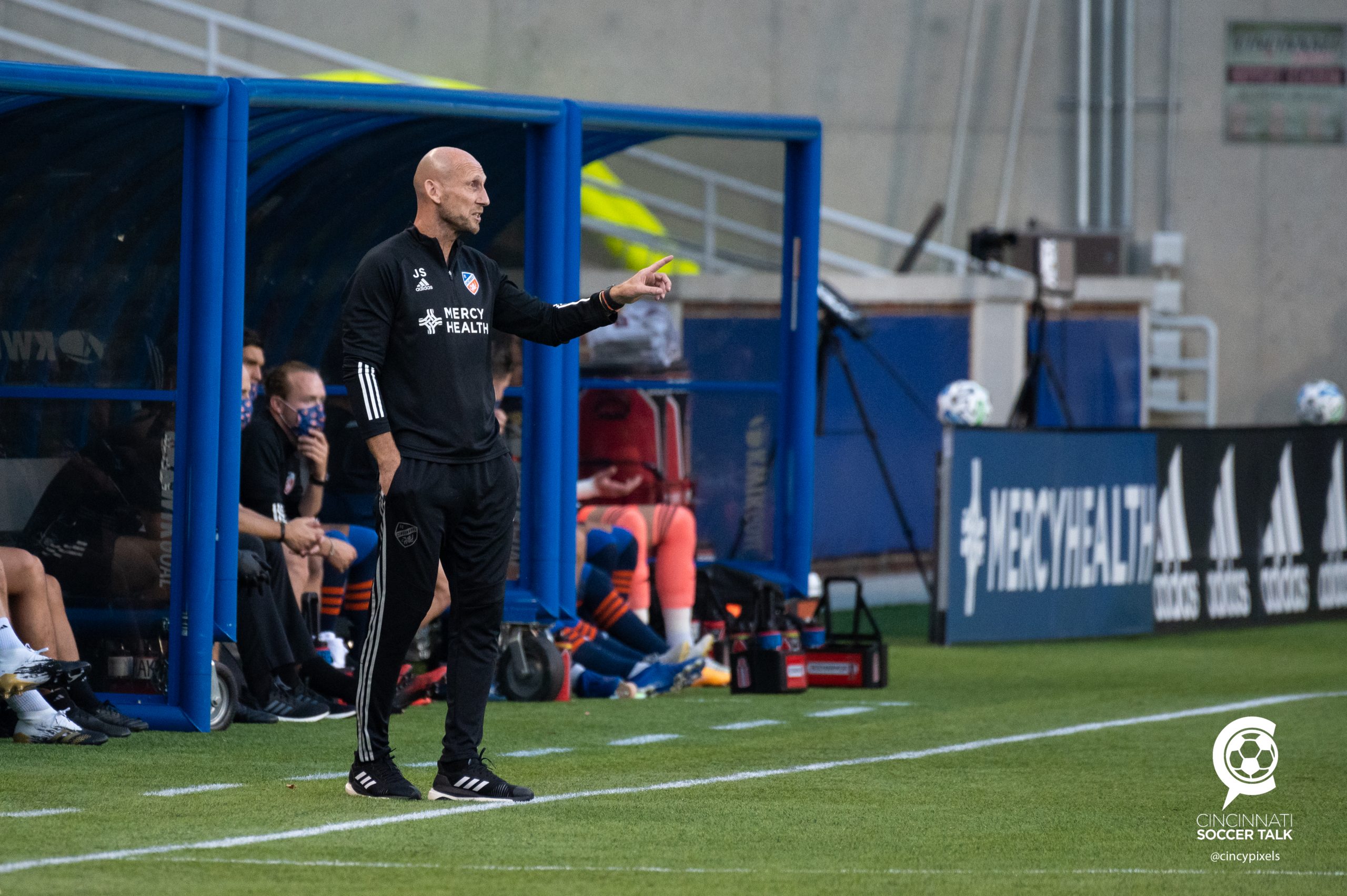 After opening formal training on Monday, FC Cincinnati coach Jaap Stam addressed more potential signings, how Brenner might mesh with Jurgen Locadia and the Frankie Amaya situation in a videoconference call with reporters.

After a week of voluntary sessions, FC Cincinnati held full-squad training at Mercy Health Training Center on Monday amid sunshine and spring-like temperatures.

The weather helped add to an already positive atmosphere as the Orange and Blue prepare for their first full season under coach Jaap Stam and the opening of West End Stadium in May.

“It’s always nice after a long offseason to be back on the pitch,” said Stam Monday on a video conference call with reporters. “It’s very good to see everybody back, new faces as well. After day one, it’s been very good. But it’s just the start.”

While Stam admitted the roster is not a finished product, he discussed several of the new faces in camp on Monday, most notably Brazilian striker Brenner and former Newcastle midfielder Kyle Scott.

Scott is a player that Stam put out a flyer on when he was the manager at Reading in England’s second division. When Stam and general manager Gerard Nijkamp were assessing midfield options, Scott’s name came up again, and FCC had a successful pursuit. Scott saw time with Chelsea’s first team as a youngster but couldn’t find a path to regular first-team football.

“That tells you something about the ability of that player,” Stam said. “When I was in England coaching at Reading, we had an interest in bringing Kyle in. That didn’t work out. It’s not that we stayed in contact, not at all. When we spoke this offseason about the roster, we spoke about midfield players of certain ability and Kyle’s name popped up.”

For the second straight offseason, FCC managed to sign a high-profile striker in the transfer market with his arrival at the airport a made-for-media event. Of course, the club hopes Brenner will bring more immediate returns than Jurgen Locadia, but as Stam pointed out on Monday, it’s possible one could help the other.

“Sometimes in last season we played also in a 5-3-2 system,” Stam said. “If you look at that system, then you could say Brenner and Locadia could also play together. Even when we play in a 4-3-3, which we played the majority of games the end of last season, they could play together. We need to have players who compete with each other.”

Stam also was asked about 20-year-old midfielder Frankie Amaya, who generated buzz this offseason with a reported trade demand followed by a call-up to the United States U-23 national team. Amaya is training with the U.S. team in Mexico.

“There’s always players who are doing well and there are rumors there’s interest for these players,” Stam said. “From my perspective, Frankie is also a player who still needs to develop and get better. Frankie is still on the contract with us, which I am very happy with. Frankie is a great guy to work with. He’s a very good player. There’s always been talks about teams with interest in a player, but a lot of that is talk. We’re looking forward to greeting Frankie back here at the club and working with him.”

The first week of FCC preseason training will conclude with a closed-door match against Louisville City FC on Saturday. The Orange and Blue will continue to train in market before embarking on a 12-day trip to Orlando, Florida, where FCC will face Chicago Fire FC on March 27, Orlando City SC on March 31 and Minnesota United FC on April 3

While Stam is focused on preparing the club in training, Nijkamp is still looking to improve the squad ahead of the season-opener. At a high level, Stam offered reporters some hints as to his wish-list on Monday.

“The group’s not done yet. We’re still looking to bring players in as well,” he said. “We needed to make changes after the season we had. In the back line, in the defense, and in the midfield, we still need to have one extra player. And hopefully up front we can have one more. If we can bring in those players with the ability that we need, it looks very promising. After the season, we were able to assess where we needed to make changes.”

The MLS schedule has not been released. Until it is, Stam won’t know how many road games his club will have to play prior to opening West End Stadium in May. But unlike last season in his first campaign as head coach, there are far fewer challenges this time around.

“I’m anxious to know (the schedule) as well,” Stam said. “We want to play as soon as possible in our own new ground, which is a positive for everyone. This preseason is totally different. With several weeks to prepare, you can come up with a plan and get a good look at that.”