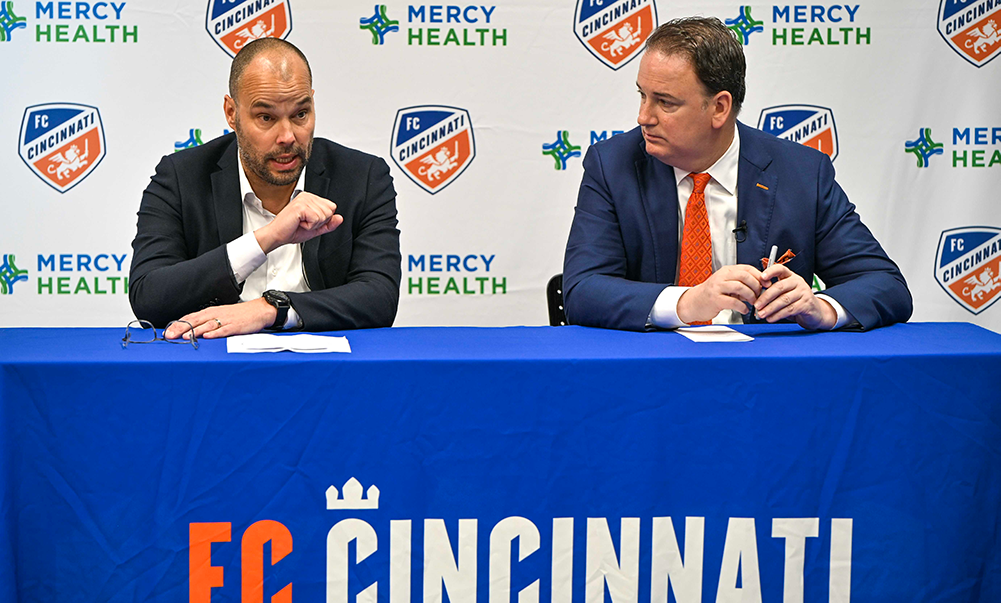 It was a fair question to ask, and one that was offered to FC Cincinnati general manager Gerard Nijkamp in various forms during a videoconference call with media on Tuesday.

How did FCC manage to sign Brenner Souza da Silva? How did the club that finished last in the Eastern Conference the past two seasons convince a 21-year-old Brazilian striker who caught the attention of Arsenal, Juventus and AC Milan to choose to spend a formative period of his career in MLS and West End Stadium? Nijkamp’s answer was luck, timing, good fortune or all of the above.

Amid the COVID-19 pandemic with clubs being cautious with their spending, perhaps there was a little too much risk involved in a player of Brenner’s age and experience. But for FCC, it was just the right amount of risk with a new stadium set to open and the shine coming off a bit for a franchise that was once the hottest ticket in American soccer.

“It shows courage from our ownership,” Nijkamp said. “In these difficult times clubs are not so proactive to sign new players. Maybe that gives us the opportunity to get this player. We convinced him FC Cincinnati was the right place for his development.”

It could be said that Brenner is the right player for FCC’s development.

In his fourth professional season, the Cuiabá, Brazil, native made 39 appearances, including 30 starts, scoring 21 goals and adding four assists across all competitions for São Paulo since the resumption of the Brazilian Championship A Series in August.

Brenner has made 61 career appearances, scoring 24 goals and adding four assists, across all competitions in four professional seasons in Brazil. While he has not made his senior national team debut, the young forward made 18 appearances at the U-17 level for Brazil.

“I’m very excited for this new challenge in my career, I can’t wait to score many goals at West End Stadium,” Brenner said in a statement. “Obrigado (thank you) for this opportunity, FC Cincinnati!”

The forward’s professional career began in 2017, when he made his first-team debut for São Paulo at just 17 years old. He made four appearances for the six-time A Series champions in his first professional season – he scored his first-ever professional goal in the season finale against Sport Club Bahia on December 3, 2017.

In the following season, Brenner made seven appearances across all competitions and was consistently in the 18-man matchday roster. In the 2019 campaign, Brenner spent the season on loan with fellow A Series club Fluminense.

Internationally, Brenner featured for Brazil’s U-17s during the 2017 U-17 World Cup in India as well as the 2017 South American U-17 Championship in Chile. In total, the forward earned 18 caps and scored six goals across all competitions with Brazil’s U-17s.

Brenner will occupy an international roster spot and be added to FCC’s roster upon the receipt of his P-1 visa and international transfer certificate when the primary transfer window opens on Wednesday.

“He’s an impact addition to our club and helps a glaring need for our club, scoring goals,” said Nijkamp. “This is taking a step to improve our attack.”

Locadia’s loan is up in June, and Nijkamp was asked on Tuesday what Brenner’s arrival might mean for the Dutchman’s future with the Orange and Blue. Nijkamp kept open the possibility that Stam could use both players interchangeably up front or on the wings, but then added he would do what’s best for the club and Locadia.

Nijkamp added that there’s still room for Brenner to develop further, and that FCC could serve as a bridge for a future move to Europe for the budding star. And that seems to be the current model for FCC. While Nijkamp lauded the benefits of having experienced players on the club, he also sees youth as a solid foundation and investment.

Already FCC has stockpiled some promising youngsters in 20-year-olds Frankie Amaya, Alvaro Barreal, Franko Kovacevic and Ben Mines, to go along with Calvin Harris who was selected in this year’s SuperDraft.

“This shows a strong commitment by our ownership to invest in young players, both domestically and internationally,” Nijkamp said. “It remains important we have a balance of experienced and younger players. It is critical to have experienced players to help these young players to develop.”

Nijkamp deflected questions about Gonzalo “Pity” Martinez of Al-Nassr or any other player rumored to be on FCC’s radar. But he did say that the club is continuing to look for ways to improve the roster, especially at the winger and center back positions. He also mentioned that FC Cincinnati was working to acquire the top position in the Allocation Order held by Austin FC. FC Cincinnati currently holds the 14th position and if the club were to finalize a move with Austin FC, likely worth 350k- 500k in General Allocation Money, the writing would be on the wall for the transaction with Al Nassr to move ahead. For now, it’s Brenner who is generating the buzz at FCC and throughout MLS.

“It makes us all excited and happy that we had this possibility to take this player to MLS and especially to our club,” Nijkamp said. “Normally this kind of talent normally heads directly to Europe. Big compliment to our owners. It came together, and it’s for everyone — you can see a big signing for us, and a big signing for MLS.”