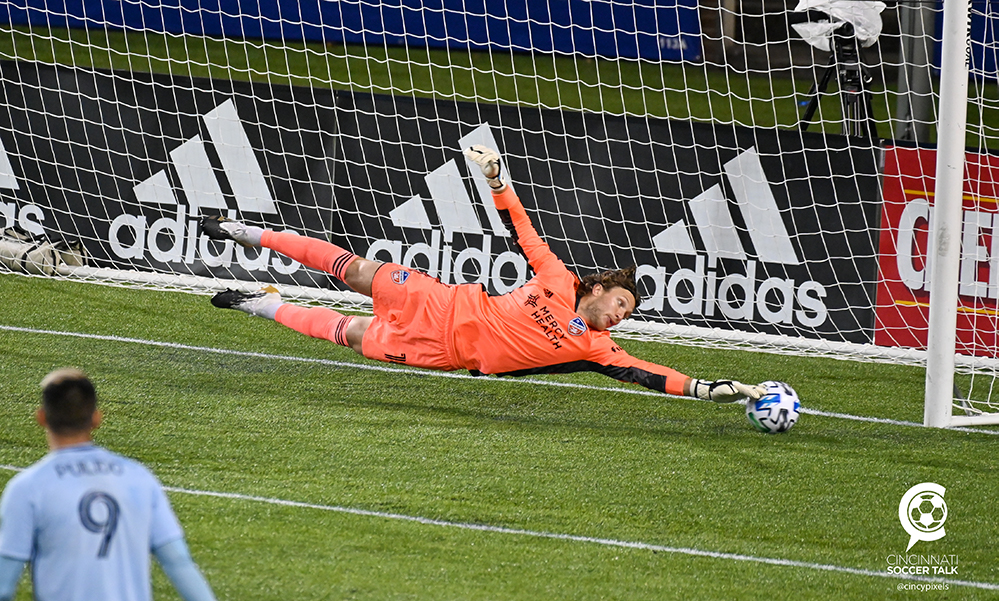 FC Cincinnati conceded twice in the first half-hour and the offensive woes continued Sunday in a 2-0 loss at Atlanta United.

FC Cincinnati was officially eliminated from the 2020 MLS playoff picture after suffering a 2-0 defeat at Atlanta United’s Mercedes-Benz Stadium on Sunday.

Meeting for the third time in a pandemic-shortened campaign, an eighth-minute strike from Adam Jahn and a 26th-minute Marcelino Moreno penalty were enough to seal the season series for the hosts.

Atlanta was helped to that victory by a continuation of the Orange and Blue’s season-long scoring woes. Despite outshooting Atlanta 14-8, the loss marks FC Cincinnati’s third straight match without a goal and 14th overall this season. The team has scored just 11 goals in 22 matches in 2020.

“Yeah, it’s disappointing, we keep saying it,” explained FCC coach Jaap Stam in the post-match videoconference. “Today was, in terms of creating and finishing, we had our opportunities, but we were not decisive enough… But at the end of the day, it’s not enough.”

Of the opportunities FC Cincinnati did create, most came from the head of Brandon Vázquez. Fresh off a newly-signed contract extension, the forward was rewarded with a start against his former side. He nearly added his name to the scoresheet at the end of the first half, too, twice narrowly missing headed efforts and forcing a fine save from Atlanta’s Brad Guzan on a third.

When asked postmatch about his and his teammates’ troubles in front of goal, Vazquez seemed at a loss.

“Sometimes, I feel like it’s just bad luck. I mean, we’re always so close,” Vazquez said. “Sometimes I wish this season was a little longer for us and we had a couple more games to perform and get that confidence we need.”

Unfortunately, that’s not in the cards.

Just a single match remains in the 2020 season, and the loss in the penultimate match of the season means FC Cincinnati remains bottom of the pile in the Eastern Conference (4-14-4, 16 points). The loss also unofficially clinches the unofficial 2020 “Wooden Spoon”, typically awarded annually to the MLS team with the worst regular-season record.

With the win, Atlanta (6-12-4, 22 points) jumps up to 11th place. The victory also keeps its slim hopes for an Eastern Conference playoff birth alive heading into decision day next Sunday.

FC Cincinnati will conclude the 2020 MLS regular season on Sunday, when the club plays expansion side Inter Miami CF for the first time in club history.