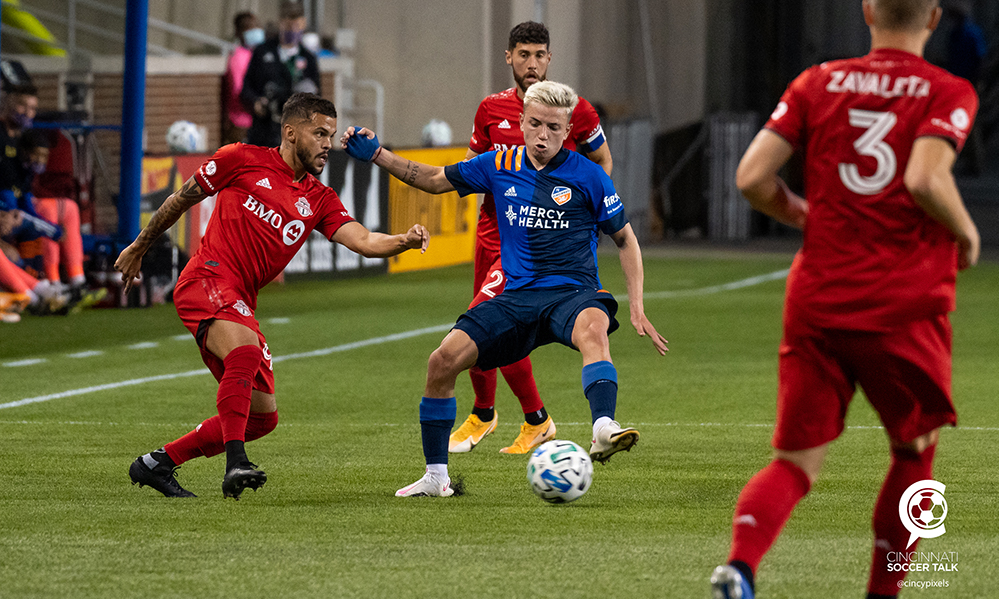 Five matches have passed — 455 minutes. And FC Cincinnati still is searching, probing, hoping for a goal. On Sunday night, hope was dashed in an especially brutal manner.

In the 93rd minute, Allan Cruz stood at the penalty spot, with FCC trailing Toronto FC 1-0 at Nippert Stadium. Cruz stood there, hands on hips, waiting for his chance to score an equalizer and what could be the club’s first goal since Haris Medunjanin’s “Olimpico” nearly one month ago.

But Cruz would not get that chance. VAR overturned the penalty, and FCC was shut out for the 12th time in 17 matches. The Orange and Blue have been outscored 10-0 in the past four matches.

“If It was one of the big teams in the league, it would have been a penalty,” Stam said on the postgame video conference. “We need to make our own luck. Nobody’s going to give it to us. We need to work for it.”

At the bare minimum, FCC did put in a shift on Sunday, splitting the possession and having seven of 16 shots and one of the two on target. But as the shutouts mount and hopes of a playoff berth barely at a glimmer at this point, there aren’t many pats of the back left to give.

“It’s certainly frustrating for the group to go on a four-game skid,” said defender Nick Hagglund on the postgame video conference. “We had a (team) meeting last week. In MLS, you get one win and things go in a different direction. It’s about looking in the mirror and fighting. We can lay over, or get together, band together and look at what’s in front of us.”

The schedule is doing them no favors with four matches in 11 days, all against playoff contenders. And the injuries are mounting.

On Sunday, FCC was without Dutch striker Jurgen Locadia and defender Greg Garza, who have undisclosed injuries that could sideline them for two weeks.

FCC also lost Mathieu Deplagne in the 39th minute to injury. He was replaced by Andrew Gutman. Keeper Przemyslaw Tyton, who came down awkwardly after fielding a corner kick, was replaced by Spencer Richey in the 82nd minute.

“It’s not just us, it’s other teams too,” FCC defender Andrew Gutman said via videoconference. “Lots of guys are going down. This season is unlike any other season. You just have to push through it the best you can.”

FCC began Sunday’s match sloppily but finished the half strong.

In the 10th minute, Medunjanin earned a free kick just outside the penalty area, but he slammed it into the Toronto wall.

In the 24th, Toronto’s Alejandro Pozuelo had a clear look at goal, but his shot went inches wide.

But the Reds cashed in moments later when Richie Laryea fed Patrick Mullins for his first goal of the season, putting them ahead 1-0.

“They got behind us, played the ball to the top of the box, and got a really good shot,” Hagglund said.

FCC had a spell of possession immediately after the goal with Hagglund’s shot from a tough angle forcing a decent save from Toronto keeper Quentin Westberg.

The Orange and Blue ended the half on the front foot.

Just before the halftime whistle, Maikel van der Werff’s header off a corner from Medunjanin went over the bar, and FCC trailed 1-0 at the break.

“We played well for most of the game, but you have to play well for 90 minutes to get results in this league,” Gutman said. “We have to put together a full 90 minutes. It’s just consistency. We need to get results and figure something out here really quick.”

Stam made a couple of changes at halftime, bringing on Kamohelo Mokotjo and Siem de Jong to replace Frankie Amaya and Brandon Vazquez. Mokotjo, a South African midfielder, showed himself well but is not yet fit enough for extended action.

“He contributed well in the second half,” Stam said. “He’s always looking forward. His first touch is mostly good. He organizes well, which is important for us in the midfield.”

Also, Álvaro Barreal, the 20-year-old Argentinian who made his MLS debut as a substitute in last week’s loss to Philadelphia Union, started Sunday’s match for FCC and played 64 minutes.

“You can see when he came on against Philly, he did very real,” said Stam. “When a young player comes over from Argentina it’s difficult. He’s reasonably fit. He can play more minutes. He’s getting used to playing on turf over here. He shows qualities that can make a difference for us.”

FCC began the second half in promising fashion, with Saad Abdul-Salaam hitting the side netting with a shot in the 55th minute.

But FCC’s propensity to send long balls into the box didn’t bear fruit as Westberg was rarely bothered.

“It was a game against a good team, a top team in the league,” said Stam. “They showed that in bits of the game. We started the game sloppy. We were giving the ball away too easy in the first half. We gave them space to play.”

With six matches remaining, one has to wonder where the goals are going to come from, and from whom? On Sunday night, it looked for a moment like Cruz was going to end the skid. But video review thought otherwise.

“The ref made the decision he thought was right,” said Gutman. “It wasn’t the only chance we had.”

Next up:
7:30 p.m. Wednesday vs Columbus Crew SC, Nippert Stadium