Brad Gough dissects how the Philadelphia Union scored their goals in Wednesday’s 3-0 victory over FC Cincinnati.

FC Cincinnati suffered yet another multiple-goal defeat, losing 3-0 to the Philadelphia Union on Wednesday. Though the first goal was severely deflected and the third goal was a glancing header from a set piece, all three showed the team’s defensive frailties at the individual level. Here’s a look at how they happened.

FC Cincinnati held the Union scoreless through nearly an hour of play. At times the Orange and Blue even looked the more likely to score. However, a poor defensive header, coupled with a lack of effort to win the second ball, provided the breakthrough the Union needed.

The move started with Philadelphia’s Brazilian playmaker, Ilsinho, on the ball. FCC was set up with a very good pressure-cover triangle (blue) to limit the threat. However, Maikel van der Werff, not Zico Bailey, should have been providing cover to Haris Medunjanin’s left. This would have allowed Baliey to shift wider and be in a better position to mark the Union’s outside back surging forward. 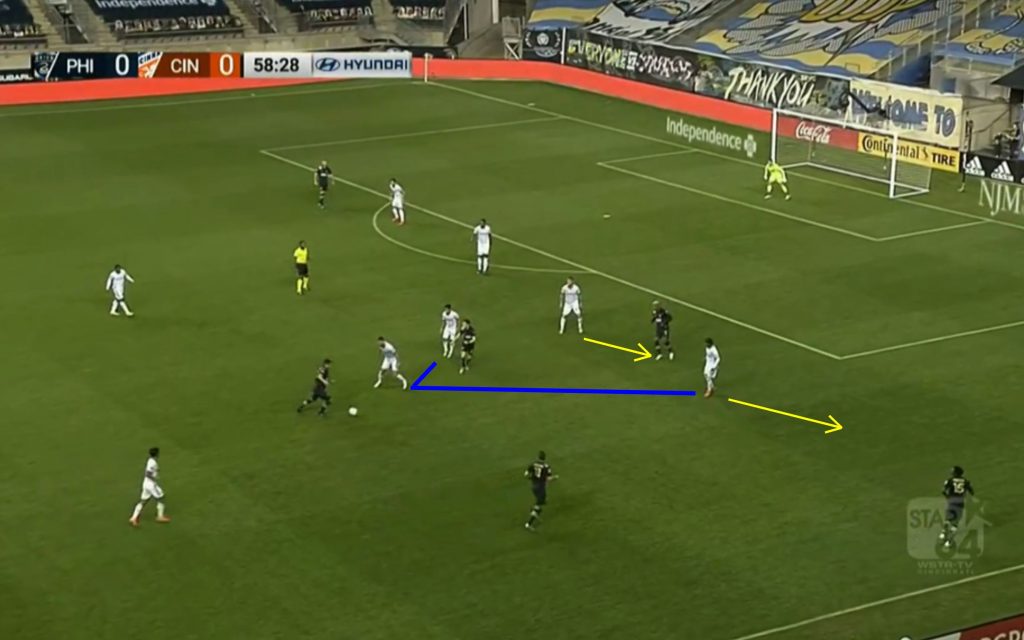 Ilsinho found that wide player, and though Bailey moved out to pressure, he couldn’t get close enough to prevent the cross. The FCC defense was well-positioned with a solid pressure-cover triangle (blue), and all players accounted for in the box (yellow). 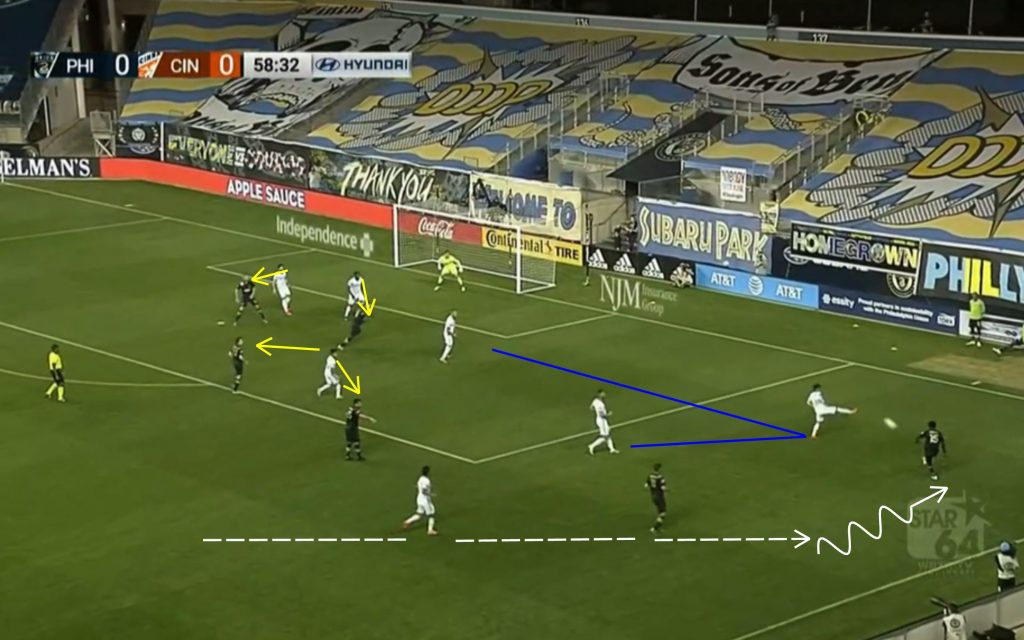 That’s where any semblance of good play ended. Due to the good positioning, Mathieu Deplagne easily won the defensive header with no pressure from the Union but could only put it straight into the air. A flicked header to the right side, or even out of bounds, would have been a much better decision. As the ball sailed skyward, Deplagne’s teammates were slow to react. Yuya Kubo and Medunjanin showed a particular lack of effort as the ball headed toward the corner of the box nearest them (red). 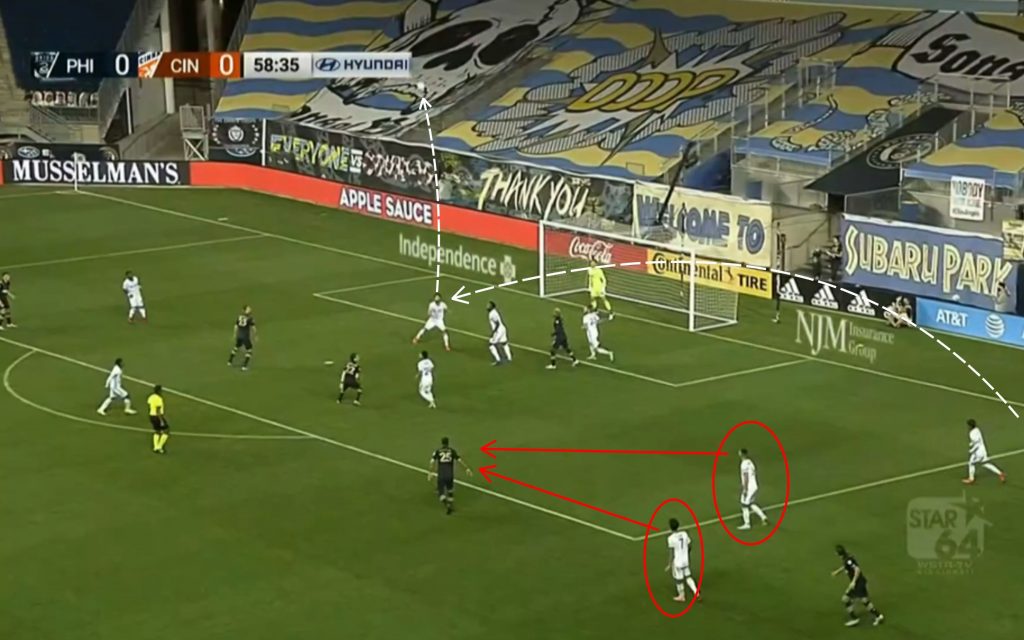 As Medunjanin and Kubo walked, the ball fell kindly to Ilsinho, who volleyed it goalward. Taking a wicked deflection off of van der Werff, it wound up in the back of the net. 1-0 Union. 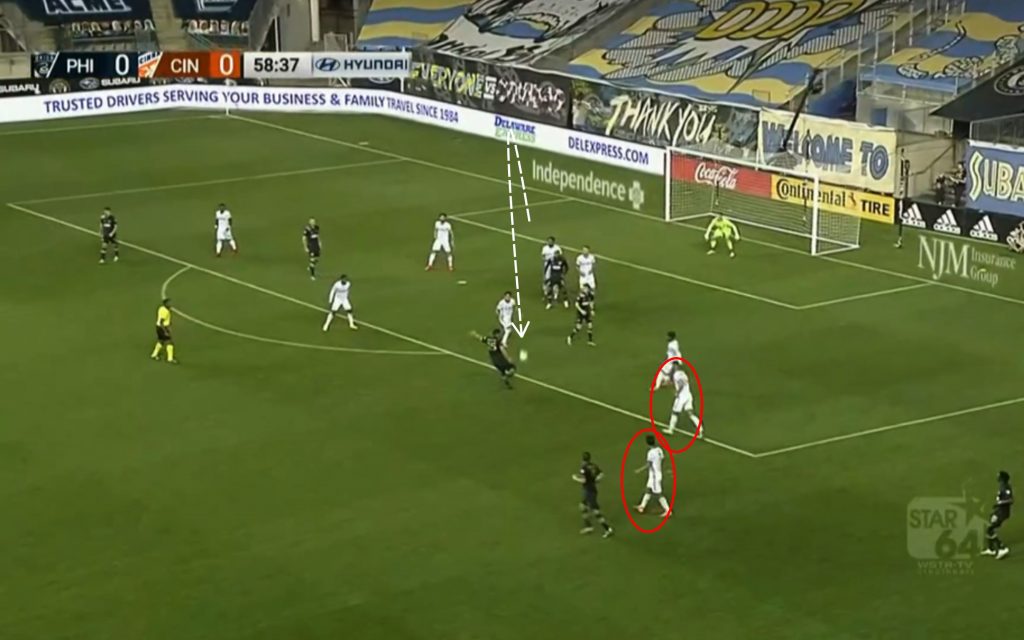 Philadelphia’s second goal came from a bad turnover in the middle third of the field by Deplagne. Eventual goal scorer Brenden Aaronson easily picked Deplagne’s pocket when FCC had solid possession of the ball. 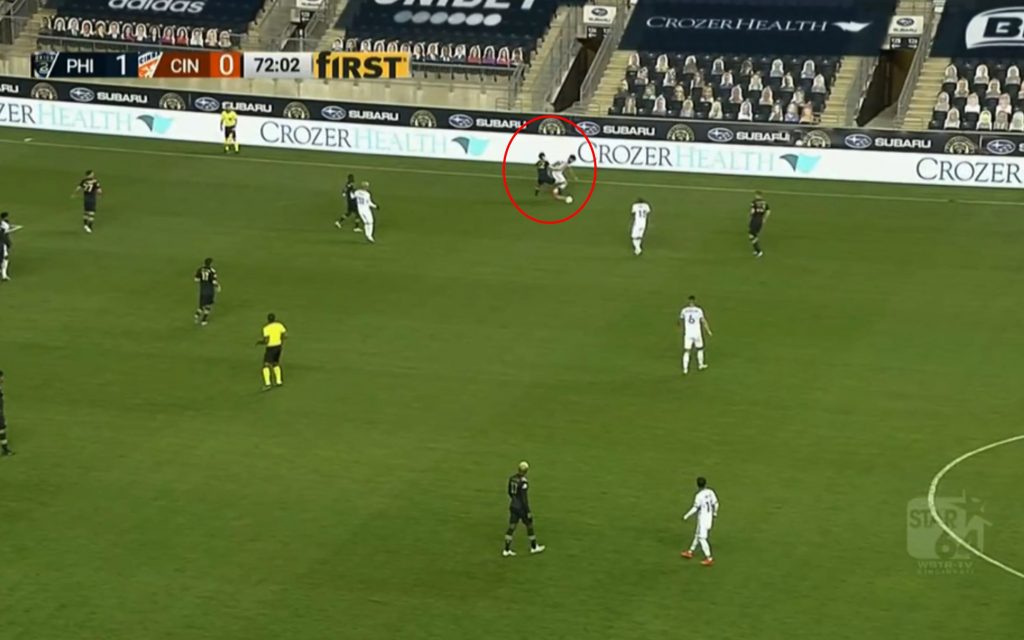 Aaronson played a negative ball to left-back Kai Wagner, then moved to make a run down the sideline. Wagner hit a line splitting pass to striker Kacper Przybylko, closely pressured by Kendall Waston. Przybylko bumped the ball underneath to midfielder Jamiro Monteiro, who had Aaronson streaking down the FCC right sideline completely unaccounted for. During this run of play, Deplagne went for a walkabout, turning to chase the ball and leaving Aaronson in the clear. 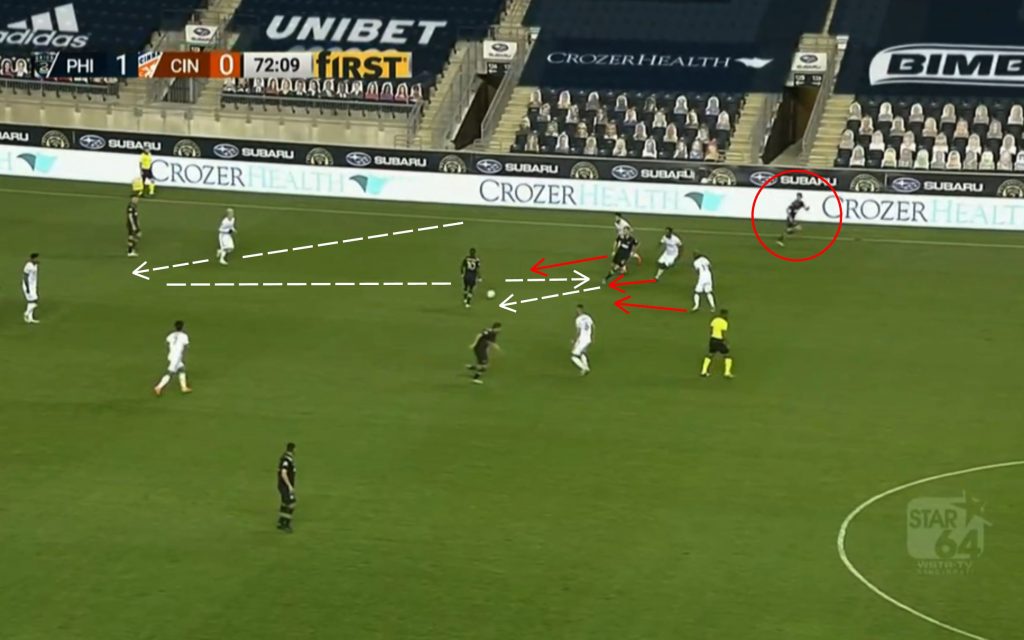 Despite this poor play, FC Cincinnati was fairly well-positioned to defend the counter-attack. Van der Werff moved to slow Aaronson on the ball, and Waston hustled back to be in a covering position. Medunjanin dropped hard to the center of the field (blue arrow), while Kamohalo Mokotjo chased the play. Mokotjo should have tracked toward the middle (yellow arrow) instead of toward the ball, leaving Medunjanin to track three Union midfielders. 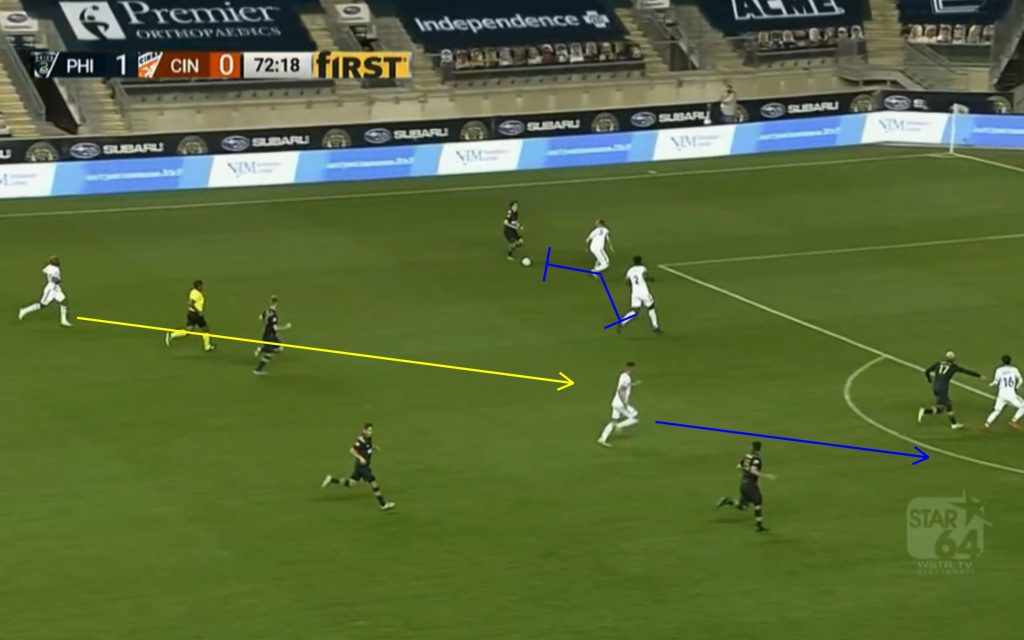 Aaronson cut inside of both van der Werff and Waston far too easily, opening up a plethora of passing options. With this cut, Medunjanin needed to get his hips turned so he could track both Ilsinho and Alejandro Bedoya. 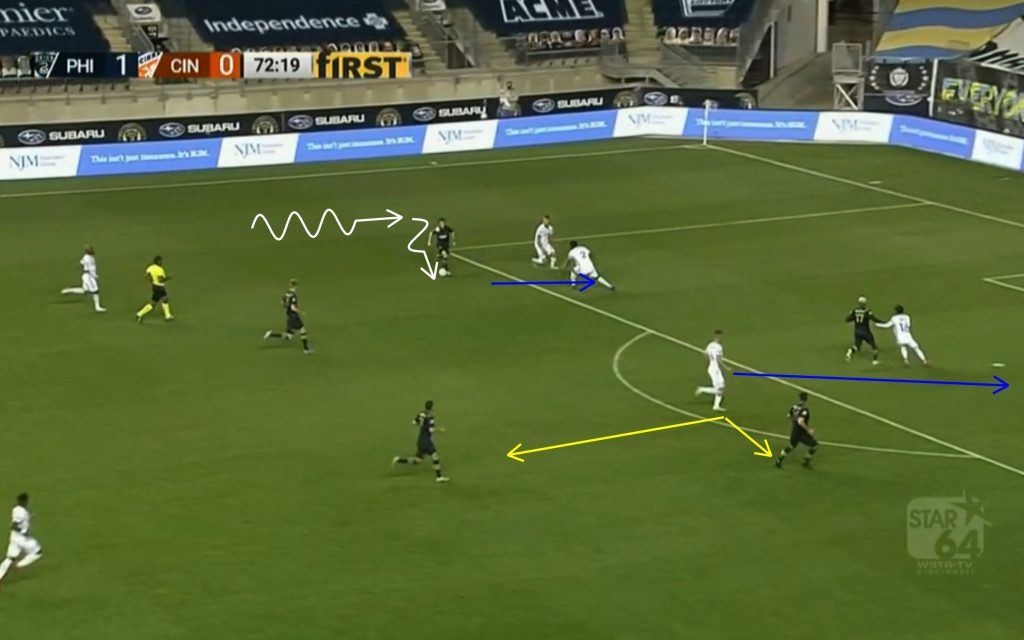 However, Medunjanin dropped in far too deep to marshall both Union players, and Aaronson easily found Bedoya at the top of the box. The Union captain’s poor first touch popped the ball up, but he was able to catch it with a sweet volley, burying the shot in the side netting. 2-0 Union. 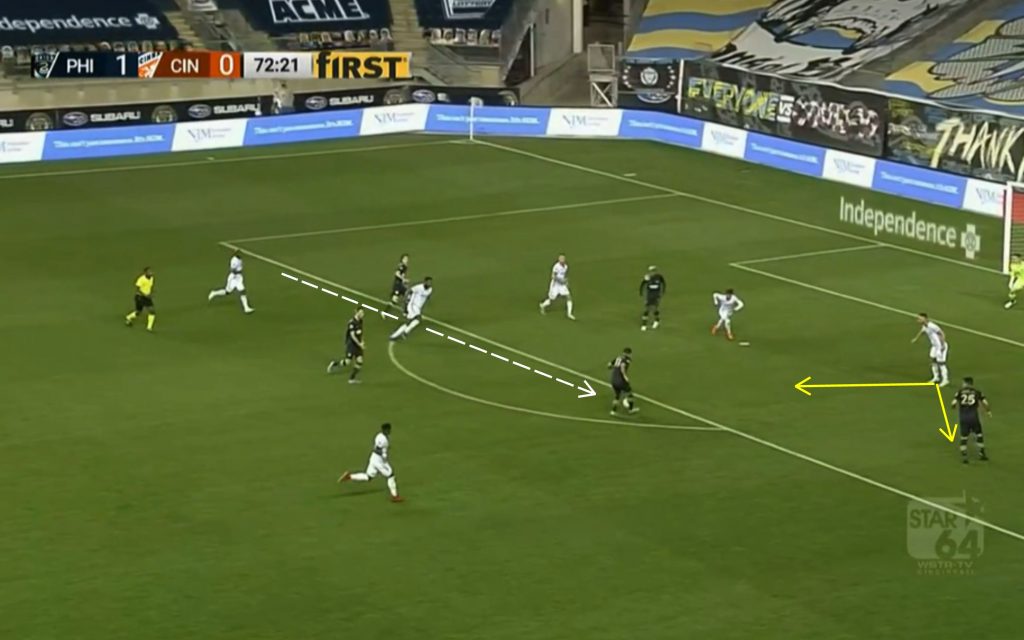 Philadelphia’s final goal came from a free kick just outside the FC Cincinnati box. Up 2-0, the Union didn’t appear to be aggressive in getting bodies into the box, and the Orange and Blue outnumbered them 6-4. Probably set up in a purely zonal system, the diagram below shows the Union players matched to their corresponding FCC defender. 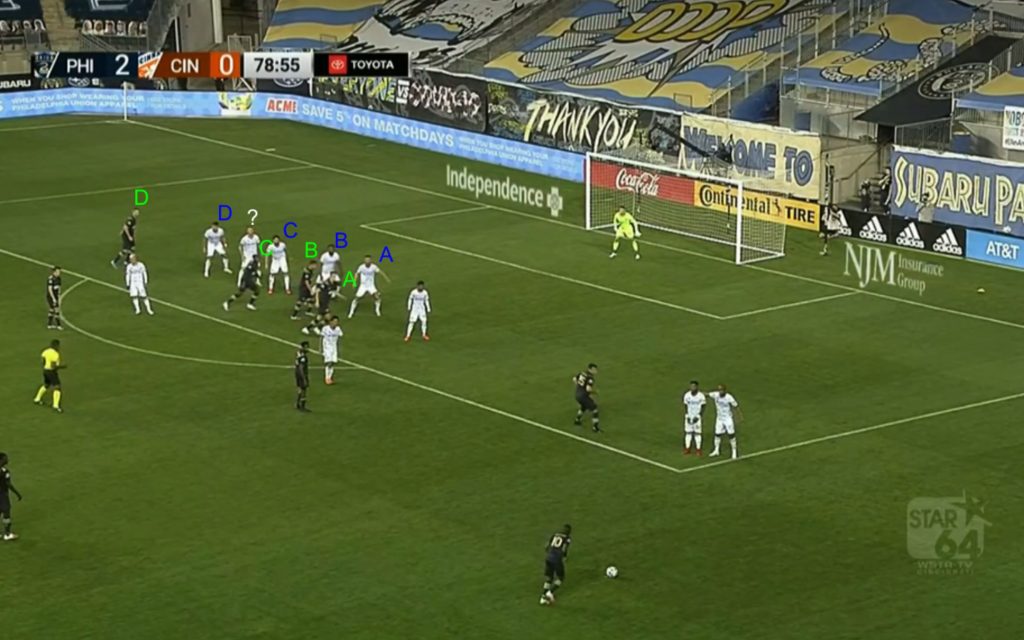 When defending a free kick zonally, players can’t simply drop straight back toward the net. They need to move to take up space within their zones where attackers are present. Monteiro whipped in a very good ball, but due to a lack of communication FC Cincinnati’s two best defensive headers of the ball, Waston and van der Werff (red), ended up marking no one. 3-0 Union. 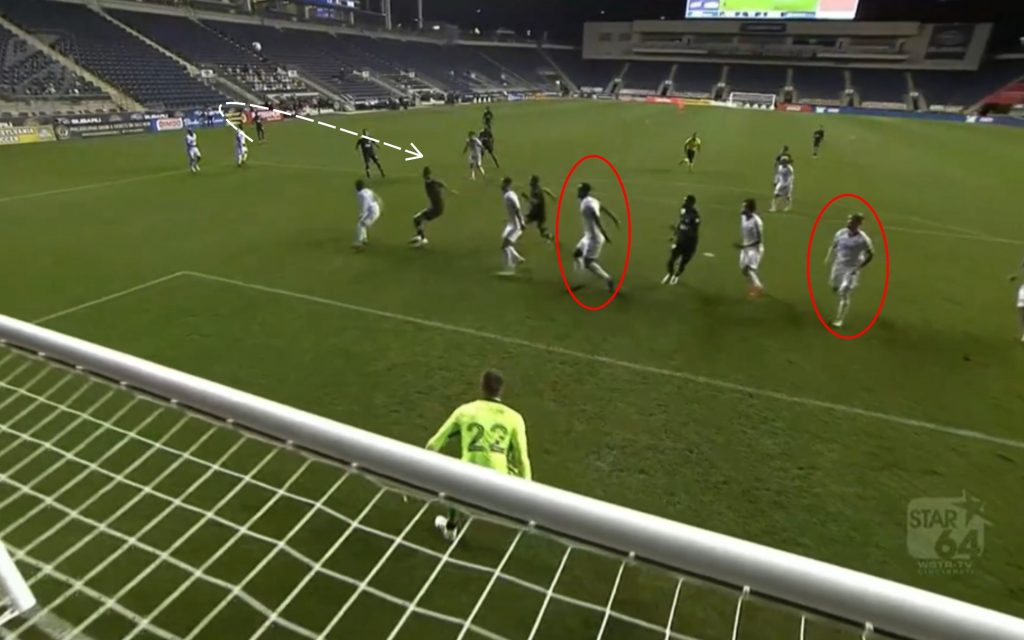 I’ve been saying for some time that Deplagne is a defensive liability on this team. The first two goals of this match illustrated this. However, until other players on the pitch stop making simple mistakes, it is tough to single him out entirely. To be competitive defensively, this team needs a new right back, a new left back, and at minimum one new center back. Since the likelihood of those signings coming this year is practically nil, this team better figure out how to start scoring soon.

Tune into the latest Talking Tactics with Coach Gough Podcast as Coach breaks down the Philadelphia Union and Minnesota United losses!