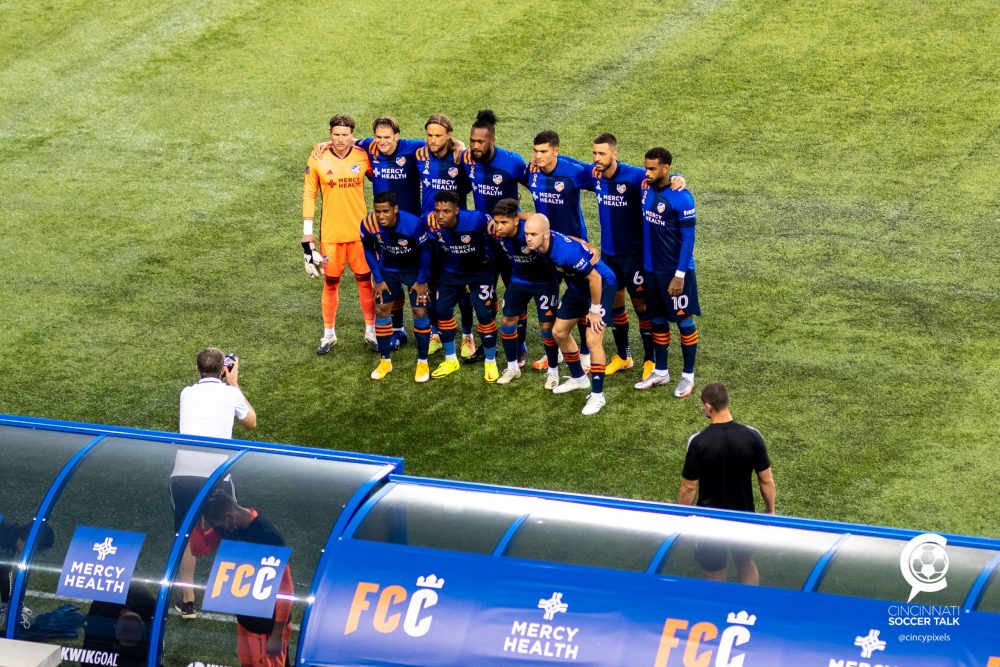 “Last week, it just happened,” said van der Werff. “Before you know it, it’s two-nil. Our goal is to keep the clean sheet and to score goals.

Jaap Stam understands where FC Cincinnati currently is in terms of the project to build a competitive MLS side. So, despite still being within a reasonable distance of a playoff spot, Stam isn’t about to err on the side of optimism or offer the fan base any sense of false hope.

It’s not that FCC isn’t capable of reaching the postseason this year especially with an expanded field. But with 13 points from 14 matches and a goal differential of minus-13, now is the time for honesty not delusion.

“I don’t talk about the goal of playoffs,” Stam said, via video conference call on Thursday. “We need to be realistic about where we need to go. We need to work through goals to eventually get there. You always want to reach key moments. Right now, we’re not consistent enough.”

Stam also noted that recent poor results, like last weekend’s dismal 4-0 loss to New York City FC, or ultimately falling short of the postseason, should not be viewed as a lack of progress heading toward 2021 and the opening of the West End Stadium. On the contrary, said defender Maikel van der Werff.

“The vibe is still good here,” van der Werff said Thursday, via video conference. “Lot of positive things here. Training is great. Everybody’s ready. Everybody wants to win. After a loss, you can’t sit down and be angry for all days. You have to put your chin up and move on.”

And move on they will, to Saturday’s matchup against Minnesota United at Allianz Field, which proved to be a house of horrors last season when an undermanned FCC squad under interim head coach Yoann Damet took a 7-1 drubbing.

So much has changed since that brutal match, which was played under extraordinary circumstances with several FCC players out on international duty and essentially a USL roster remaining, that Stam said it has not been a point of discussion this week for the team.

“It’s a situation where the club was at the time and where Minnesota was at the time,” said Stam, who of course was not yet FCC’s head coach. “I know that the score was quite high. The players don’t talk about that particular game.”

FCC got a boost this week with the arrival of midfielder Kamohelo Mokotjo who has been training with the club. Stam said the South African is not fully match fit and isn’t likely to start or play a full 90 minutes, but he will be part of the squad this weekend in Minnesota.

“You can see he’s a player,” Stam said. “Shows quality on the ball. The only thing is he’s been out for a period of time. Needs to get in a rhythm again. He can be involved in the roster. But to start him straight him straight away, we don’t know yet. We can’t bring him in for the full 90 minutes. We need to do what is the best for him.”

Mokotjo has had three training sessions with the club and his quality has shown from the start. Van der Werff was a teammate of Mokotjo’s at PEC Zwolle in Holland and he holds him in high regard.

Since the restart, FCC has lost two matches 4-0 and two matches 3-0. Those matches followed a familiar script where FCC conceded first and never was able to get back into the match. It’s largely been a clean sheet or nothing for them. That lack of consistency is something Stam wants to see develop in these remaining nine matches.