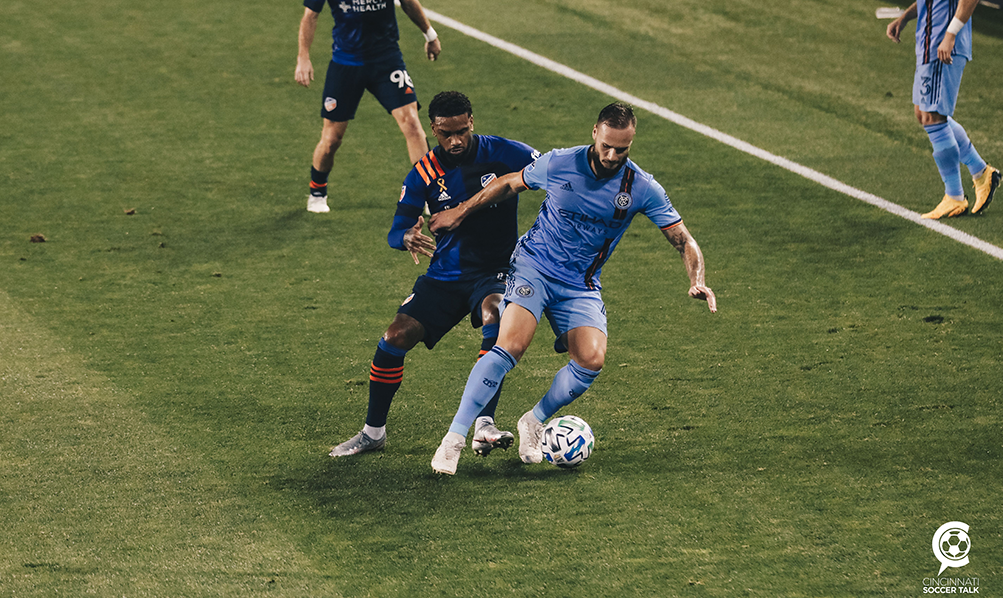 FC Cincinnati is the same distance from last place as it is from the final playoff spot. The club will be looking to rebound from last week’s loss Saturday at Minnesota United.

Most FC Cincinnati fans would like to forget the last meeting with Minnesota United. They’d also like to forget last week’s thumping at the hands of New York City FC.

As it stands, the Orange and Blue will enter Saturday’s 8 p.m. contest at Minnesota in the same manner they last exited Allianz Field — on the heels of a hefty loss.

The momentum FC Cincinnati (3-7-4, 13 points, 12th place) built after breaking a 558-minute scoring drought and then posting a victory over the New York Red Bulls and a draw with the Philadelphia Union was quickly squandered with a stunning 4-0 loss at New York City FC on Saturday.

FC Cincinnati is now just as close to last place as it is to the playoff line — a margin of just two points in either direction — and is building another scoreless streak, now at 185 minutes since Haris Medunjanin’s Olimpico on Sept. 19 at the Red Bulls. The news of defender Nick Hagglund’s positive COVID-19 test doesn’t help matters, though the club won’t use that as an excuse.

The outcome against Minnesota United (5-5-4, 19 points, sixth place in the Western Conference) could go a long way toward the path the club takes in this unique 2020 season.

The Loons drew Real Salt Lake 0-0 on Sunday at Allianz. Leading scorer Kevin Molino has been an unused sub the last two matches, but Minnesota is not lacking in firepower after adding Kei Kamara. Though Kamara only has three goals this season, he’s always a threat to score.

Here are three things to look for in the match:

Can the Orange and Blue bounce back off the mat and show a pulse after losing at NYCFC? Also, should they go down a goal, especially early, can they keep the heads from sagging and stop a one-goal deficit from turning into more?

The honeymoon is over. It’s time for FC Cincinnati’s biggest addition in 2020 to produce and finish chances. The potential is there — we saw it in the first week of the season seven months ago. He needs to make it happen.

The back line vs. the Loons’ attack

Hagglund was just finding his groove at right center back in coach Jaap Stam’s 3-4-3 lineup. The trio of Tom Pettersson, Kendall Waston and Maikel van der Werff were each culpable at some point against NYCFC. How will they fare against Lod, Kamara and Reynoso?