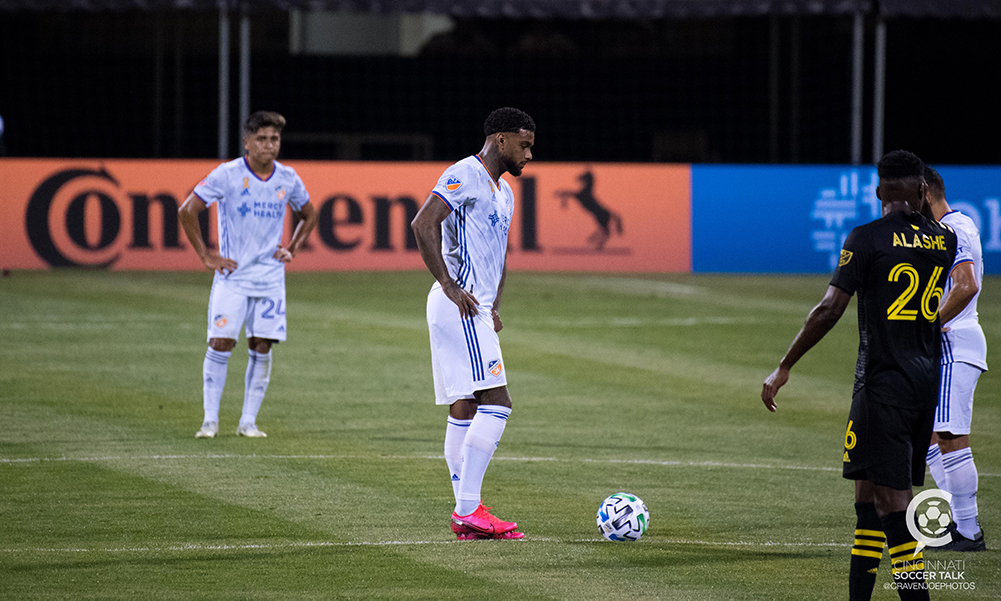 A switch to a 4-3-3 couldn’t keep FC Cincinnati from being on the wrong end of the scoreboard in a 2-0 loss Saturday at Minnesota United.

FC Cincinnati lost 2-0 to Minnesota United late Saturday evening. This is the team’s second straight loss, and the ninth time the team has failed to score a goal in a match this season.

Coach Jaap Stam said in his postmatch videoconference he felt very disappointed, because he thought FCC dominated and controlled the match.

“We should have got more out of this game,” Stam said. “But, the thing is that we played well. I’m very happy with the performance of the team and how we played. We were very, at times, composed. Sometimes, yeah, you make decisions that yeah, you need to do better, but that’s football, everybody knows that.”

The match started serviceably for FCC with the team trying to feel its way through the change in formation, going with a 4-3-3, Stam’s preferred shape. It looked like FCC was doing alright, not great, at transitioning to the final third but was still having trouble figuring out what to do when the team got there. However, Mathieu Deplagne had other ideas. As a ball came in and Deplagne tried to stop it, he stepped on Chase Gasper. This was not originally a penalty, but VAR got involved and made the correct call — a penalty kick in favor of Minnesota United. FCC legend Kei Kamara stepped up to the plate and slotted it in to give the Loons a 1-0 lead.

The rest of the half was relatively open for both teams, with Minnesota having the better of the chances. FCC continues to be unable to make great chances happen inside the box, but the new 4-3-3 shape might be able to help with that, allowing more attacking options on breakaways or other similar attacking situations. The half almost ended with Minnesota doubling its lead to two goals thanks to a poor giveaway from Deplagne, but a great stop from Przemyslaw Tyton allowed the lead to stay at one goal going into the end of the half.

“I think we did some good soccer in this game,” Haris Medunjanin said via videoconference. “I think we controlled the ball but in the end, what’s it all about is to score goals to win games and that’s what we need to do. I think we showed, today, the new system that we can play, that we can hold the ball more than we did before and that we play really composed and that we create a lot of chances.”

The second half started rather well for FCC, as the team was good in transition. In particular, Kendall Waston had a beautiful switch to Deplagne that gave FCC a free kick in a good position. One aspect of the game that stood out was the team trying to play very quickly after a restart or a throw-in. It was ready to play as soon as it could. While allowing the team to catch Minnesota off guard, helped at times, it also might have been better to survey its options at times.

FCC got its best chances of the match from the start of the half to the 65th minute. The team looked good, and this was the time it needed to capitalize on its chances, but that didn’t happen. FC Cincinnati was unable to do anything with the small amount of great chances it did have, only having two or three outstanding looks at goal.

The deathblow to FCC’s chances came in the 70th minute from substitute Kevin Molino on the left wing, being left wide open and then getting a shot past Tyton’s near post to double the lead for the Loons.

FCC had a couple remaining opportunities, but the biggest news of the match following Minnesota’s second goal was that new signing Kamehelo Mokotjo made his debut for FC Cincinnati in the 88th minute, coming in for Deplagne, who had a disastrous match. The match ended shortly after Mokotjo entered and made a pass that allowed FCC a sliver of a chance, which could be a sign of things to come.

This match, while having chances for FCC, also contained it playing sloppy, but the team showed it didn’t put its heads down, which is more than some of the previous matches.