After the positivity of 225 minutes without conceding a goal, FC Cincinnati broke that streak emphatically by giving up three at MAPFRE Stadium to the Columbus Crew on Saturday. A combination of individual errors and an inability to create offensively proved to be the team’s demise. Here’s a look at how each goal happened.

At the start of the second half, Columbus Caleb Porter introduced Luis Díaz into the lineup on the right wing. It became immediately evident that he and the Columbus right back, Harrison Afful, were going to try to overload Greg Garza and the left side of the FC Cincinnati defense. FC Cincinnati coach Jaap Stam failed to make the necessary changes to counteract this tactic, and the home side capitalized with an early goal.

The move began with a bad giveaway that saw the ball ricochet from the center of the field to Adrien Regattin, who was unable to get it under control and instead deflected it to Afful on the right flank. Noticeable here was the lack of immediate defensive transition. Once it became evident that Columbus was going to win the loose ball, each FCC player should have shown urgency in retreating into their defensive shape. Joseph-Claude Gyau (blue circle) was the last to react, and Pedro Santos (red circle), the player that he was to pick up, was to be the eventual goal scorer. 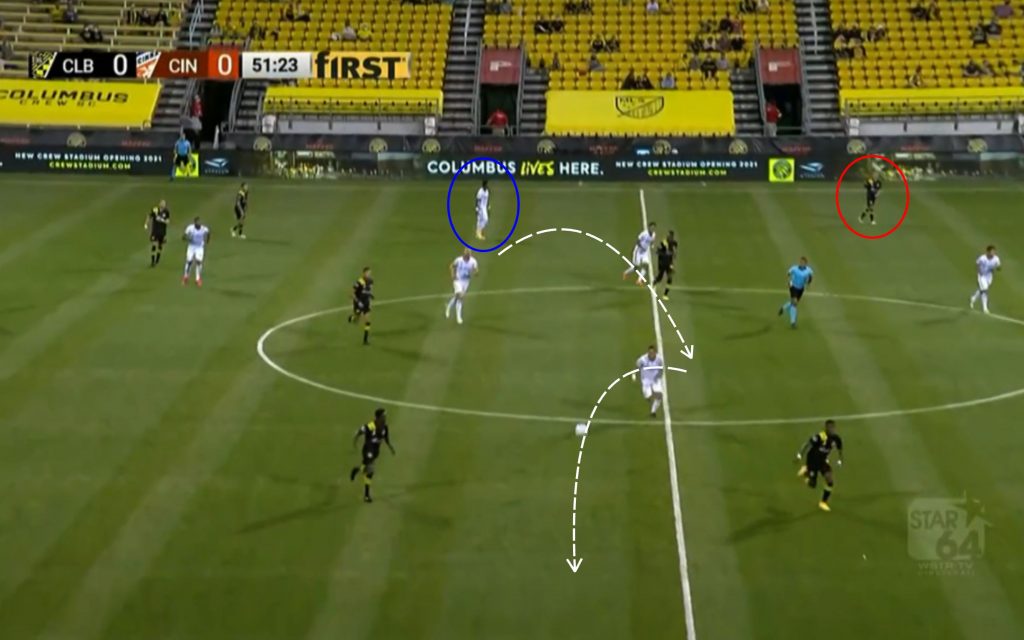 Afful moved the ball to Díaz, who immediately looked to take on Garza off the dribble. The American right-back was easily beaten with a turn of pace and could only swing an arm at Díaz in a failed attempt to slow him down. Though he shouldn’t have been so easily beaten, Garza received little help from his covering defenders due to the slow transition of the midfield. Had Yuya Kubo or Frankie Amaya taken up a position in front of the back four more quickly, Maikel van der Werff would have been able to slide over to more effectively help Garza (red). 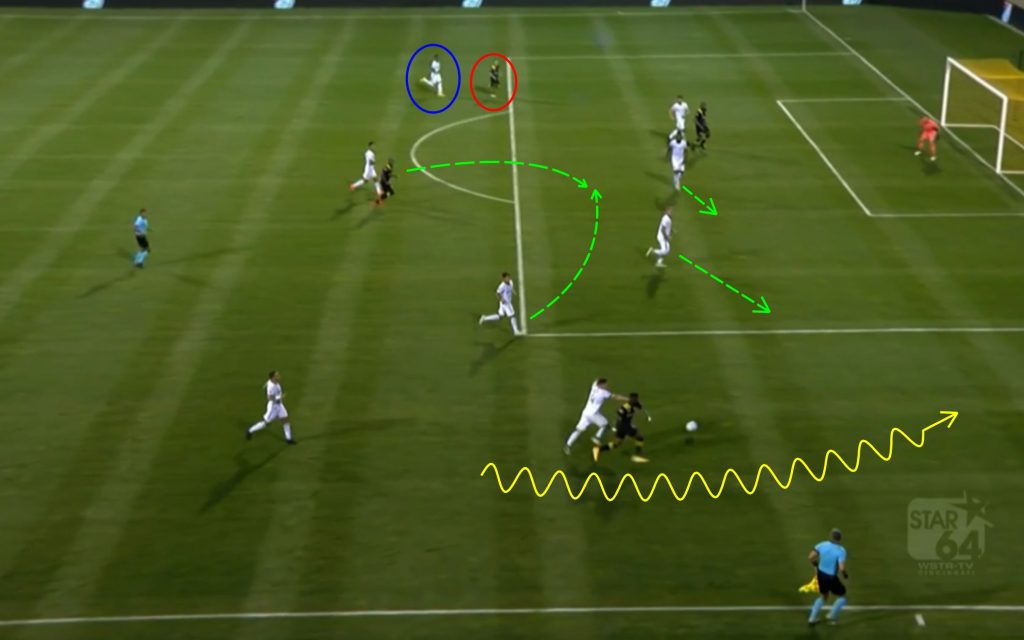 Díaz found a dangerous cross through the FCC penalty area. Kendall Waston and Kubo were left flailing in an attempt to stop a potential Darlington Nagbe strike, which they were just able to do. However, Gyau completely turned off as the cross came through, leaving Santos wide open to easily slot his shot home. 1-0 to the Crew. 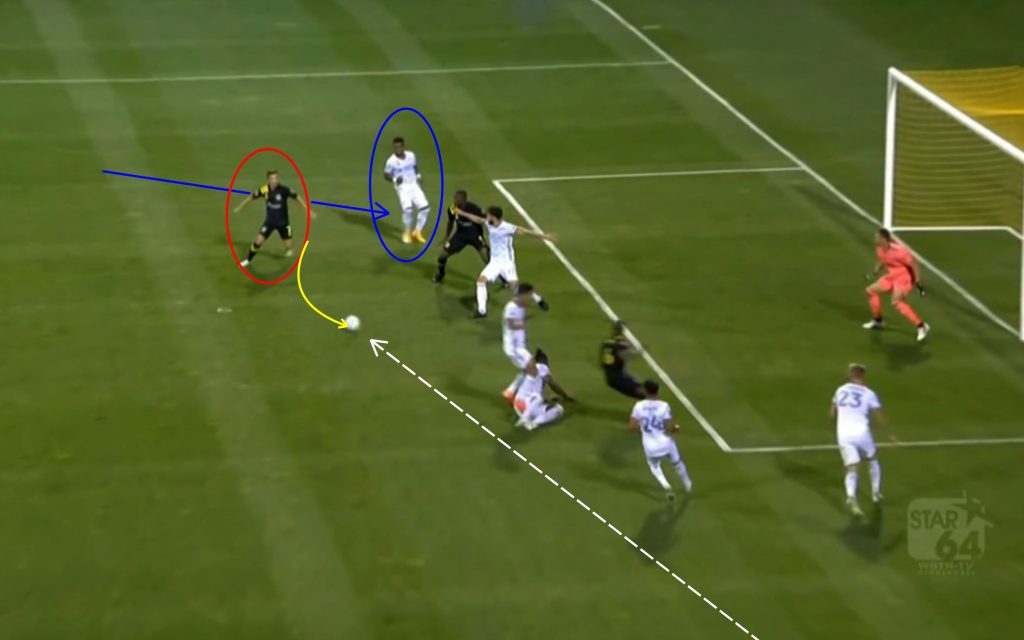 Gyasi Zardes, the FCC Killer, came into the match for the Crew soon after the opening goal, and it didn’t take long for him to get on the scoresheet. FC Cincinnati had just introduced Haris Medunjanin and Andrew Gutman and shifted to a 4-3-3 when a ball into the corner should have easily been dealt with by Deplagne. Instead, he tried to play the ball off a Columbus attacker for a goal kick and turned the ball over needlessly.

The ball was passed out to Santos, who was pressured by Amaya with Deplagne in cover (red). As Santos moved the ball centrally to Nagbe, Medunjanin correctly moved out to pressure (blue). 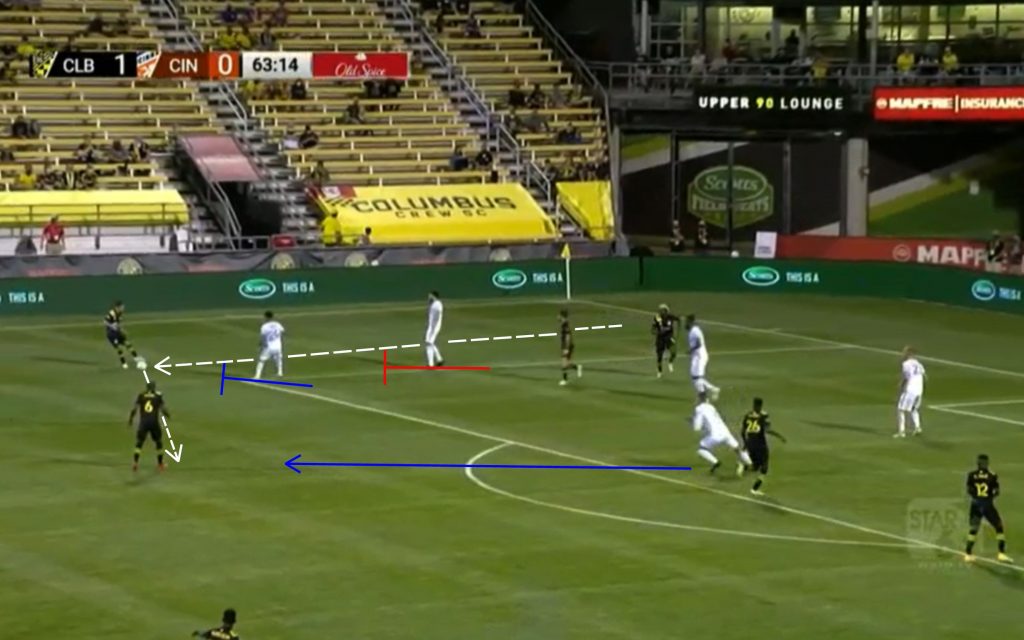 Amaya correctly moved to help out in midfield, leaving Santos, the Columbus left-winger, to be marked by FCC’s right back. However, instead of remaining in a position to cover Santos, Deplagne sagged back toward the middle as if he were still playing right center back. Gyau had not tracked back to cover due to the formation switch. 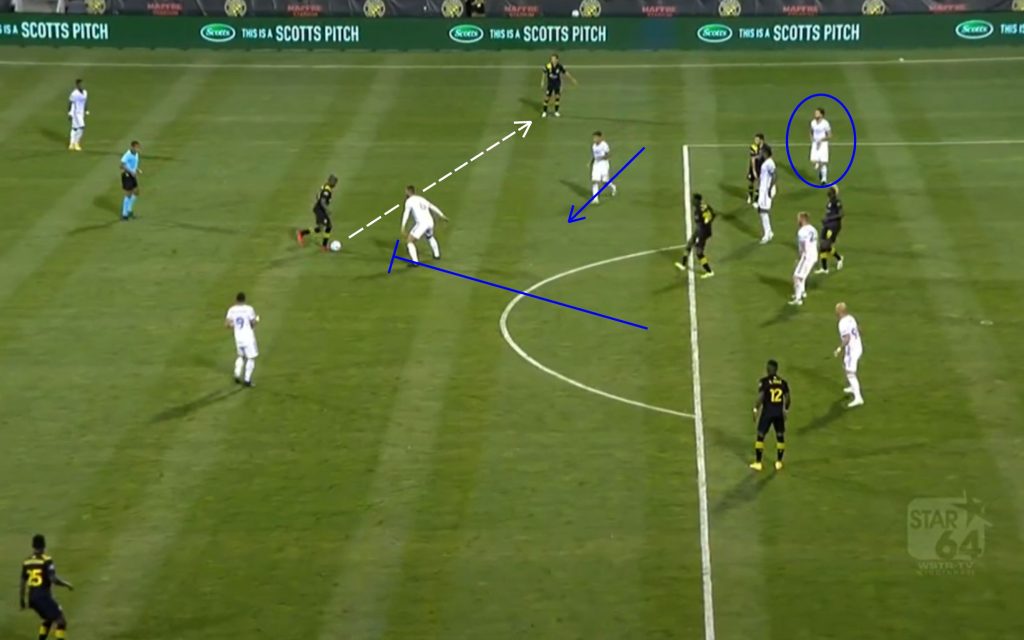 Nagbe shifted the ball back out to Santos, and though Amaya attempted to move back over to press, he was not in time to prevent the cross. Van der Werff was touch-tight to Zardes and should have been able to beat him to the cross, but the American forward got the better of the Dutchman to deflect the well-served ball in at the near post. 2-0 to the Crew. 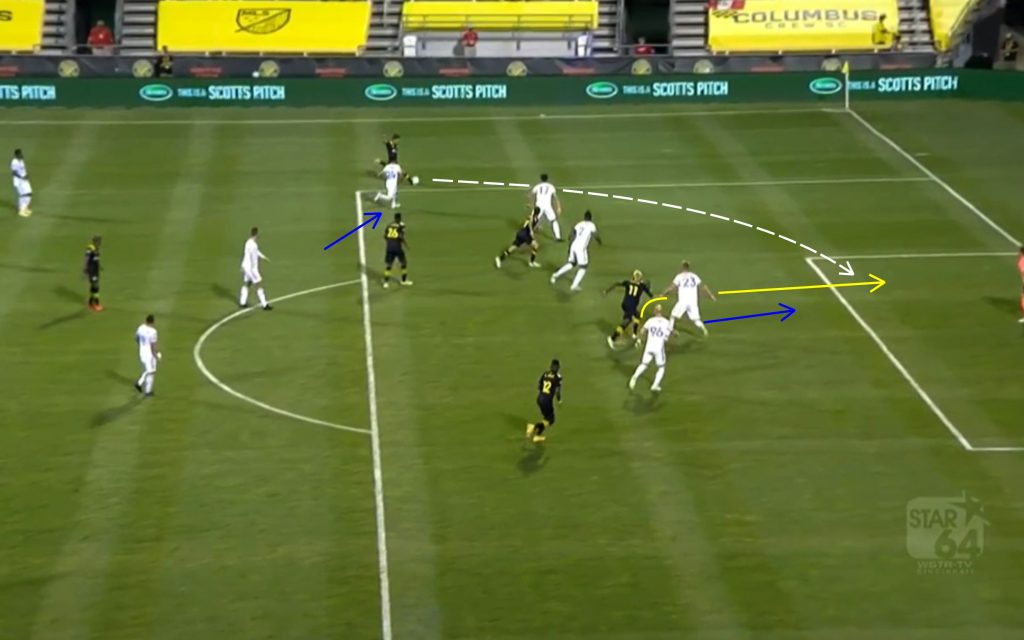 The final goal, Zardes’ second, came from a move that began at the midway line. Columbus moved the ball to Valenzuela on the left wing, and Deplagne was there to press (blue). Valenzuela looked to flick the ball into Santos as he checked back from a forward position. 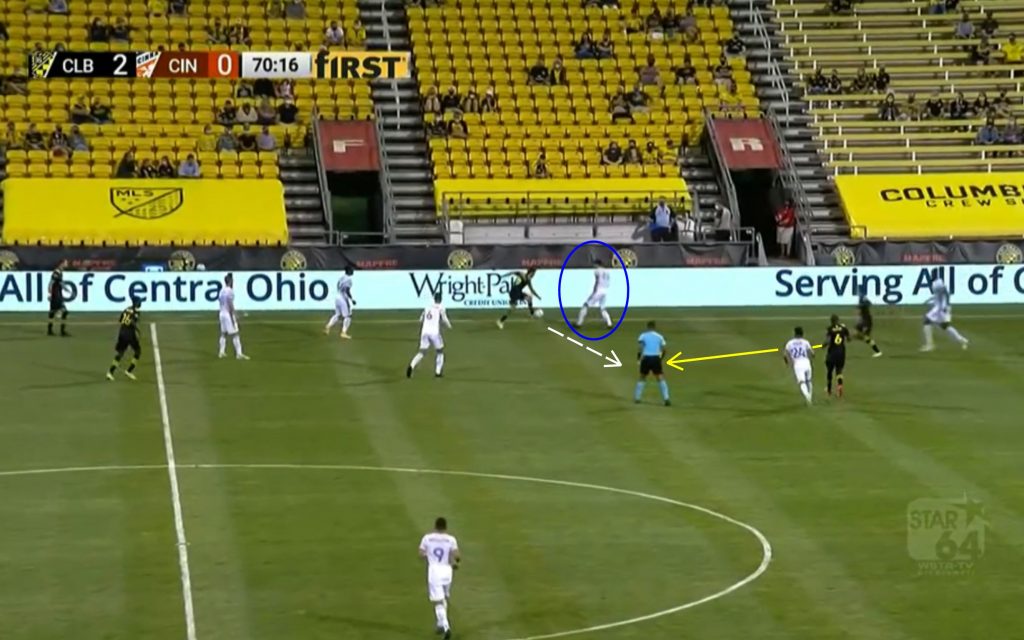 Valenzuela easily ran past Deplagne, who momentarily hesitated, thinking his job was finished and began the break for Columbus. 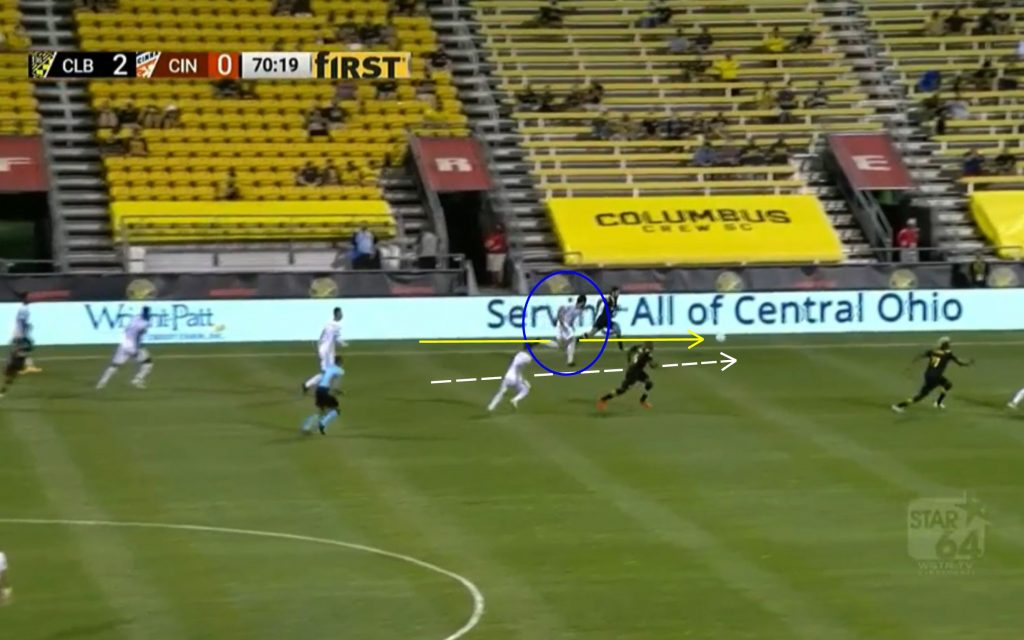 With the Orange and Blue defense scrambling, Valenzuela found Díaz, who cut inside and had his shot deflected high into the air. As it fell to Afful, Deplagne was the deepest FCC defender, keeping Zardes onside. 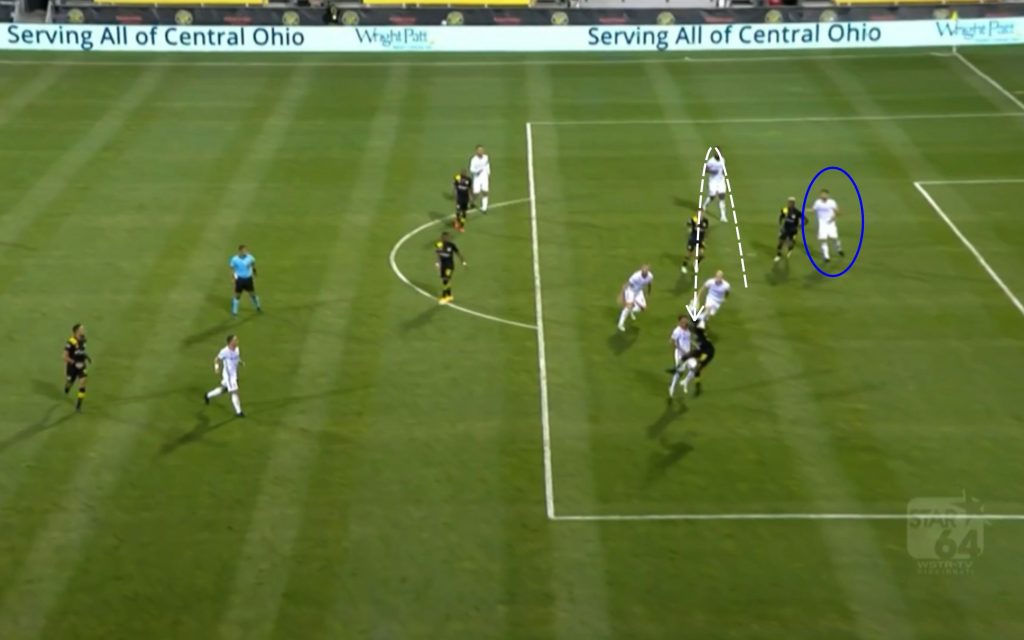 Afful’s header was met by Zardes with Deplagne once again slow to react. Przemyslaw Tyton made an excellent save to deny the American and parried the ball into the air. Tyton’s deflection fell kindly to Deplagne, who attempted to bring it down on his chest facing his own goal. Had he headed it away, or even turned his body to shield Zardes, the goal may have been prevented. Instead, he popped the ball nicely off his chest and Zardes met it for a first-time finish. 3-0 to the Crew. 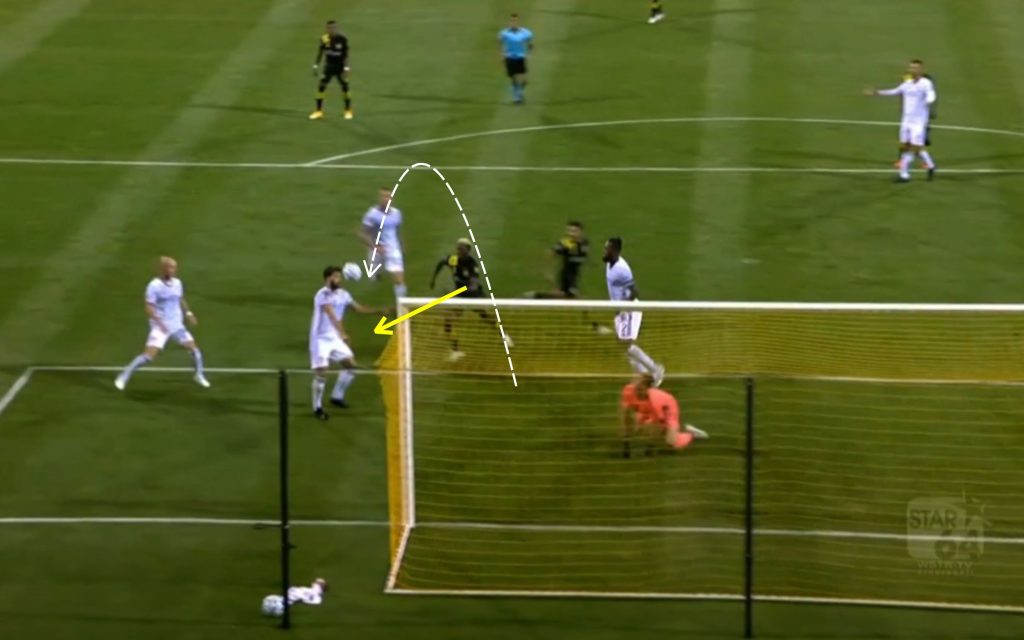 Every goal scored in a soccer match is a confluence of events, most of which could be prevented by any number of players on the pitch. However, there is typically a moment in the build-up where a poor turnover, a mental lapse or a failure to track back escalates the danger precipitously. Unfortunately for Stam and FC Cincinnati, one such mental error typically leads to more, causing a 1-0 deficit to turn to 2-0, and even 3-0 soon after.

Stam will not be happy giving up three goals to any team, much less a rival. But he may be even more troubled by his team’s lack of goal scoring. He’ll have a full week of training to try to right the ship as he leads his team to take on New York City FC on Saturday.

Tune into the latest Talking Tactics with Coach Gough Podcast as Coach talks with Michael Lahoud, and answers your questions in the mailbag. Look for our newest podcast on your favorite podcast network each week!