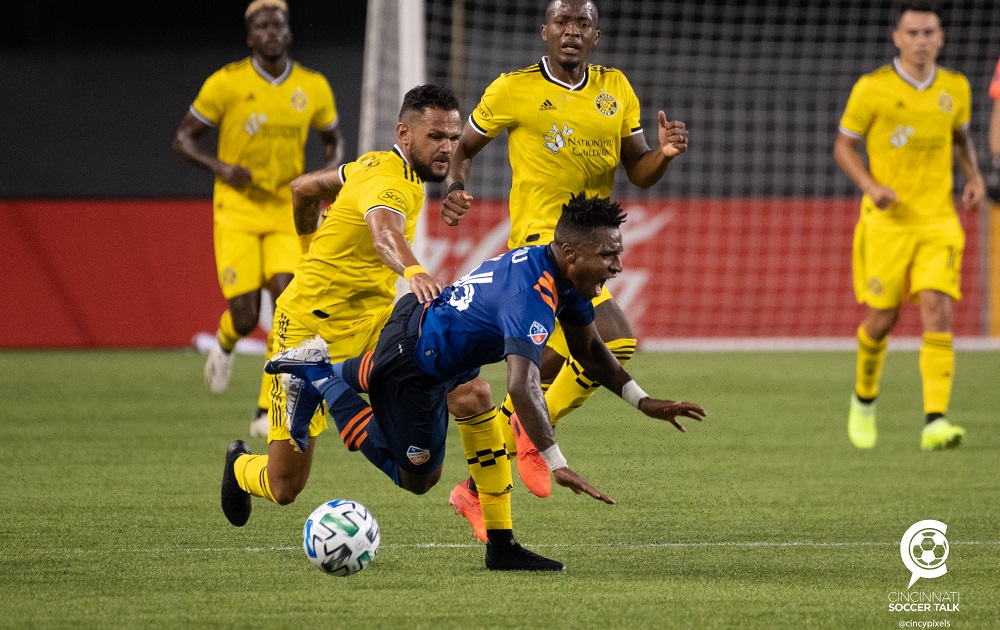 Coach Jaap Stam didn’t exactly have a dream start with FC Cincinnati. Playing one of the best teams in the league and the club’s rival for his first game, in a bubble in Orlando, Florida, produced the worst result the team has seen this season, a 4-0 loss to Columbus Crew SC. But credit to Stam — he immediately reacted and adjusted to what he saw in his roster. He has focused on defending, and since that game, the Orange and Blue have had five clean sheets and a goal differential of zero. They got a second chance against Columbus last weekend and held it to a scoreless draw. This weekend, Ohio’s two teams meet for their third game this season, and it’s FC Cincinnati’s opportunity to even up the score. A win would split the total points evenly between the two clubs.

Columbus has the stingiest defenses in the league, having only given up two goals the entire season. FC Cincinnati has one of the lowest-performing offenses in the league with only six goals scored. We’ve seen that FC Cincinnati can hold its own against Columbus, but it needs to score to pick up three points. To do that, while playing in a defensive shape, it will need to be quicker to transition and more creative off the ball with diagonal runs that require more decision-making from defenders. Check out Brad Gough’s Talking Tactics to see how this would have provided us more opportunities in the last match against the Crew.

The Columbus midfield is the engine of its team. Darlington Nagbe and Artur break up plays before they make it to the backline and are capable of quickly transitioning to attack. Lucas Zelarayan finds space and creates opportunities for the Crew. In their first match this season, the Orange and Blue tried to press and struggled to possess the ball and control the midfield. As they forced turnovers, Columbus punished FC Cincinnati with its quick transition. In their second game last weekend, Stam changed tactics, using wingbacks to drive forward and avoiding turnovers in the midfield where FC Cincinnati had been vulnerable. Columbus still drove the ball through its midfield, but with three centerbacks, the final pass or shot was under pressure, and FC Cincinnati made it difficult for Columbus. Columbus only managed three shots on target and a single big chance.

In the last match against Chicago, Stam rotated his players a bit more and used four substitutes. Allan Cruz made it back on the pitch, and Greg Garza got his first start since July. Haris Medunjanin got his first start since returning to play after the birth of his baby. The current roster is light with players transferred and loaned out to make room for new additions who are not yet available. Stam needs to continue to rotate as many players as he can to avoid injuries and mistakes brought on by fatigue.

Columbus and FC Cincinnati have had four MLS matches in their history. Columbus is leading the contest with two wins and two draws. FC Cincinnati has never defeated Columbus outside of the 2017 U.S. Open Cup match when FC Cincinnati was still in the USL.

Jimmy McLaughlin is not medically cleared to play, according to club game notes.

Frankie Amaya and Mathieu Deplagne both have earned four accumulated yellow cards. They need to be careful to avoid another yellow card which would result in a one-game suspension.