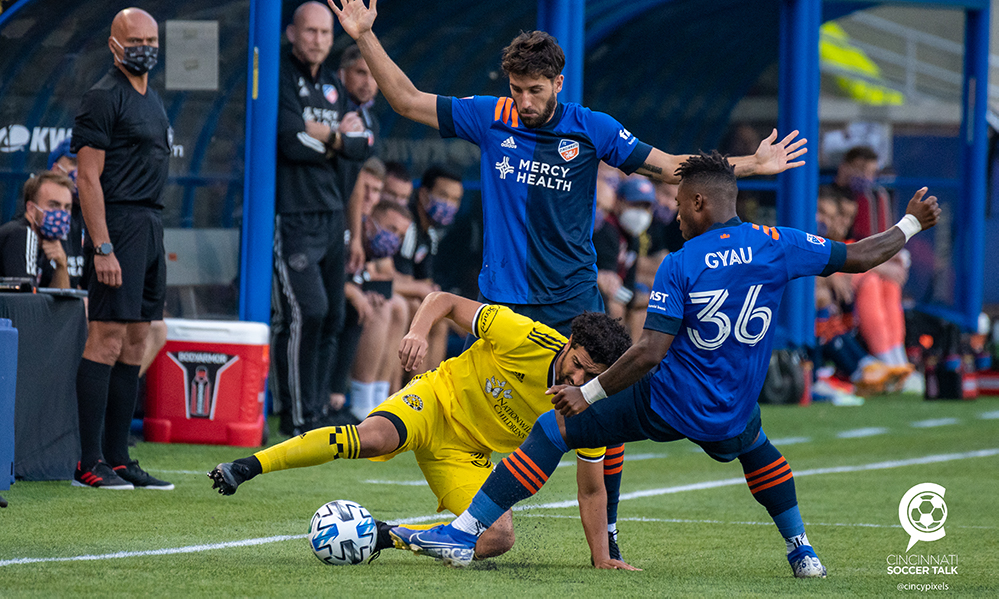 Last week’s loss at the Chicago Fire is fresh in FC Cincinnati’s mind as the two teams meet again Wednesday at Nippert Stadium.

Jaap Stam’s primary objective as head coach of FC Cincinnati was to stop the losing, to stop leaking goals at an MLS record rate, thus keeping his club in matches and giving it a chance to win, or at a minimum come away with a point. For the most part, he has accomplished that objective in the early stages of his tenure.

FCC has recorded four clean sheets in the past six matches. But in Saturday’s 0-0 draw in the Hell is Real Derby against the Columbus Crew, Stam’s team not only produced yet another staunch defensive effort, but it was more threatening going forward.

Stam said getting forward and creating more scoring chances is becoming more of a focal point in training. This should stand to reason since FCC hasn’t scored a goal since July 28 against the Portland Timbers in the MLS is Back Tournament in Orlando, Florida. But Stam put to rest the notion that FCC spends hours at the Mercy Health Training Center perfecting parking the bus.

“We’re not only working on the defense,” Stam said via teleconference on Tuesday. “We’re doing more offensive work, to be honest. We work a lot on going forward to be that threat, to create opportunities. We need to be a bit more decisive and direct and have the eagerness to score. In these games that are very close and tight, the opportunities we get, we should score. We’re very close to getting that.”

FCC still struggles to find cohesiveness in the final third. Ill-timed runs, errant passes, and an inability to spend enough time in the opponent’s half have resulted in too few chances being created.

On Wednesday night against the Chicago Fire at Nippert Stadium, however, the focus might be more on the first 10 minutes, then they’ll go from there. In the last meeting seven days ago, the Fire shocked FCC with a Fabian Herbers goal in the second minute and an Alvaro Medran strike eight minutes later. FCC chased the match the rest of the way, eventually losing 3-0.

“We gave them the space to run in and not following men, so they could easily score their goals,” Stam said. “It looked very bad for ourselves in defending. We weren’t aggressive enough, not focused enough, very sloppy. Everybody was surprised by the early goal. It’s up to us to reset that tomorrow.”

Playing matches in such close succession is difficult for the players, as is switching from natural to artificial surfaces. So far, FCC has gotten through this initial restart without any significant injuries. Stam said Allan Cruz is back in full training after suffering a knee injury, but the staff is being cautious with him. Siem de Jong, who was subbed off with a cramp in the last match, is doing well.

Getting back on the pitch so soon against Chicago, in particular, could prove to be an advantage, with the last match and the defensive mistakes made early on still fresh in the minds of the FCC players.

“We lost a bad game last week and we need to rectify that mistake game,” said French defender Mathieu Deplagne via videoconference. “We didn’t start the game the right way. Two goals in the first 10 minutes. It was a bad start. It is fresh in our minds, the mistakes we made. So maybe the advantage is for this, we know how to attack them and their weakness.”

In the draw against Columbus, FCC didn’t see much of the ball, but it managed five shots, two on target, and managed four corners. It arguably had the better of the chances in the second half.

“It’s a good moment if you want to talk about revenge, to settle the score and do better,” Stam said. “We’re still in the phase of building, organizing and structuring the team. Eventually, we’ll get to where we are playing for the same goals, which is the top of the league. Right now, we look for progress game to game.”