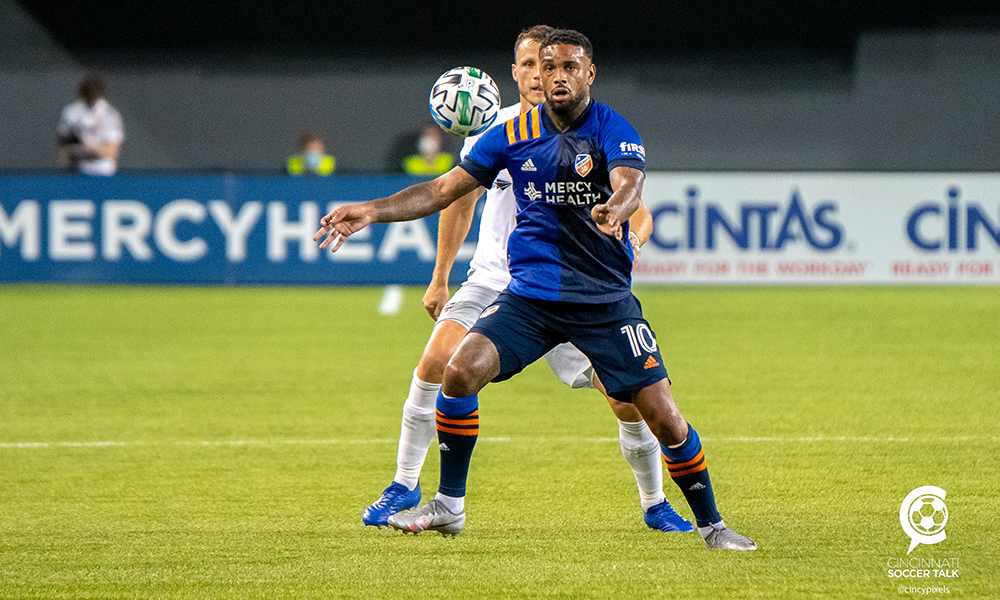 FC Cincinnati must quickly forget about its loss in Chicago earlier this week in preparation for Saturday’s Hell is Real Derby against Columbus Crew SC.

The quick scheduling of the new MLS regular season doesn’t give any team much time to sulk after a loss. FC Cincinnati will take on its rivals, Columbus Crew SC, mere days after their mid-week defeat in Chicago. This chapter in the Hell is Real derby is scheduled to take place at 7:30 p.m. at Nippert Stadium, behind closed doors.

The question is whether this game is played, as professional athletes across the country (and across all sports) have refused to play in protest of police brutality and racial injustice following the shooting of Jacob Blake in Kenosha, Wisconsin, this week. The wildcat strike, started by the Milwaukee Bucks during the NBA Playoffs, inspired the Milwaukee Brewers and Cincinnati Reds to protest as well. All but one MLS match ended up postponed on Wednesday. The day after, more baseball teams refused to play, and the NHL postponed their playoff games scheduled for Thursday and Friday.

Nothing official has been announced by the league, the player’s association, or individual teams regarding this weekend’s games but it can’t be ruled out.

“I think it’s also up to the players as a collective because they did make that call,” Joseph-Claude Gyau told reporters Thursday via videoconference about Wednesday’s protests. “I can’t really dictate what’s going to happen Saturday. As of now, we’re ready to play. We’re ready to get on schedule, but there are some larger issues at hand.”

If the players decide to go forward with the derby there will certainly be a lot to play for. The last time the two met was in Orlando as a part of the MLS is Back Tournament’s group stage. The Crew blew out FCC 4-0, but a lot has changed since then. That was the first result in Jaap Stam’s career as head coach for FC Cincinnati, and it inspired a new tactical approach that led to two straight victories and a place in the knockout rounds. While Columbus maintained their success, it will be without their talented attacking midfielder Lucas Zelarayan.

FC Cincinnati is struggling with injuries as well. Most notably, Allan Cruz had to leave Tuesday’s game against the Fire in the first half after colliding with Yuya Kubo. Cruz started in the place of Siem de Jong who left the game prior with a minor injury. Fortunately, de Jong was fit enough to replace Cruz and seemed healthy throughout the rest of the game. The Dutch playmaker could be influential if FCC is to take points from Columbus. The offense struggled to produce chances against Chicago, only placing one shot on target. De Jong and striker Jürgen Locadia will have to step up if FCC is going to score. But don’t forget about Gyau. If he can find space to run on the right sideline, he can get into dangerous positions and unlock the offense.

Despite the absence of Zelarayan, Columbus will still be difficult to beat. The Crew was unlucky to miss a few key chances against New York City FC, and it was their only loss of the regular season. Darlington Nagbe has been their best player this year, and he’ll be the key for the Crew once again. If midfielders Caleb Stanko and Frankie Amaya can’t find a way to contain him, Nagbe will be able to control the midfield and set up his teammates to score.

It’ll be interesting to see how the Crew respond to FC Cincinnati’s more defensive shape. They won in Orlando by taking advantage of open spaces and running at the FCC defense. With Kendall Waston and company happy to sit back and absorb pressure, Columbus will have to find another way to score. Most importantly, an early goal would be crucial for the Crew. The Orange and Blue still struggle to recover when they concede early, so if they can keep Columbus from scoring in the first half, this game could be very close.