FC Cincinnati drew the Columbus Crew 0-0 in a scoreless draw Saturday night. Coach Jaap Stam employed a 5-3-2 defensively that looked like a 4-4-2 going forward with Joseph-Claude Gyau given free rein to get up the right side of the field on attack. While both teams had a couple of chances, both teams were toothless on the attack with Columbus leading in expected goals with a meager 0.74 to FC Cincinnati’s 0.55. 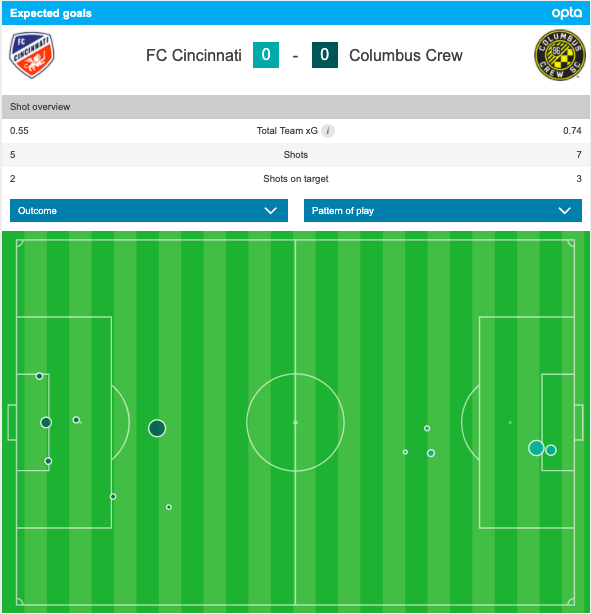 Tyton saved all three shots on target for his fourth clean sheet of the season. He faced his toughest tests of the match early with two key plays. Arguably the play of the match came when he rushed to come out of the box in the 11th minute and force Youness Mokhtar to take his shot before settling. If Tyton hesitated one second, Mokhtar is alone behind the backline for a likely opening goal. He followed that play up with a point-blank save off a Gyasi Zardes header a minute later.

Kind of a 50/50 night for Gutman. While most of the fireworks for FC Cincinnati went up the right side of the field, Gutman put in a solid shift on the defensive side of the park, limiting the influence of Pedro Santos and Harrison Afful. Gutman limited Afful getting to the end line and crossing the ball into Zardes and Lucas Zelarayan. Most FC Cincinnati fans will remember Gutman’s cross to the Bailey when he did get forward, but it was his step to Zardes in the 55th minute that saved the club from going down a goal in the second half.

Maikel van der Werff got the start on the left side of the center back trio over Tom Pettersson, and it honestly might have been one of his best performances in the Orange & Blue. With van der Werff, FC Cincinnati had a center back that was able to stay strong on defense and counter quickly with incisive passing to help open the attack. He was 32 of 34 on the night in passing and added four defensive clearances and interceptions each.

Waston rebounded well after a poor performance Tuesday night in Chicago. He had five clearances, one interception and made things difficult for Zardes. Check out the middle of Columbus’s final third passing chart. Waston, as key to the back three, made it tough for the Crew to get many dangerous chances. I also liked that when Waston picked up the ball, he wasn’t afraid to pick out a long ball up to Jurgen Locadia to start the counter. All that being said, Waston almost cost FC Cincinnati in the 55th minute when he stepped up into midfield and whiffed on a tackle. That gave the Crew a 3v2 breakaway, but luckily Gutman stepped to Zardes quick enough that caused the cross to just miss the outstretched foot of Santos for a tap in. 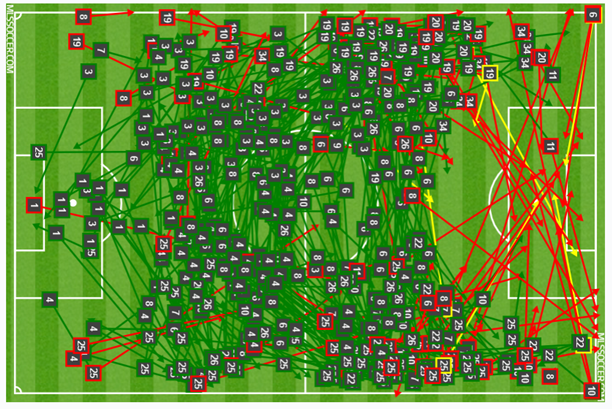 Deplagne was solid at right center back with Gyau trying to get forward. I still question whether Deplagne can win the ball consistently in the air, but he was solid on the ground, winning seven duels and four tackles. Any time you see the passing map like above, you have to give a hat tip to the backline. Zardes has dominated FC Cincinnati in the past, and outside the 11th-minute header, he found opportunities hard to come by.

Gyau continues to be the most dangerous man on the pitch for FC Cincinnati and the only reliable creator on the offensive side of the ball. His speed causes problems for opponents, and he caused five fouls, three of which gave FC Cincinnati great opportunities for set pieces. He won 12 duels and was often the first player to loose balls. Eventually, FC Cincinnati will have to capitalize on his hustle plays and I’d like to see how he and Locadia can work on more give and goes as the club picks up more possession.

Frankie Amaya had one of his more quiet games of the season. With Siem de Jong and Yuya Kubo as partners in midfield, his role was to cover a lot of ground and clean up possession. He didn’t have one stat that stood out above the rest, but his heat map was all over the pitch.

Still kind of a mixed bag for me with de Jong. He can go long periods where I forget he’s on the field, but when he gets the ball you see flicks and passes that other players just don’t make. You are seeing he is a weapon on free kicks and nearly got a goal in the 17th minute that forced a tough save by Eloy Room. He does have a sneaky confidence on defense and picked up three interceptions for the Orange & Blue.

Another partnership to watch with Gyau is Kubo. Their movement caused confusion for the Crew and provided the few attacking chances of the night. Central midfield still isn’t his preferred position, but I’d like to see what he can do when FC Cincinnati has more of the ball in meaningful possession.

Outside of Gyau, the only other player that could create his own chances was Regattin. While he started up top in the 5-3-2, Regattin was again given free rein to drop deeper into midfield to pick up the ball and charge forward. He picked up one of FC Cincinnati’s two created chances, but it just wasn’t enough for FC Cincinnati to look consistently dangerous.

It’s still tough to judge Locadia because FC Cincinnati isn’t creating enough chances. The only time he could get involved was with his hold up play, but FC Cincinnati couldn’t hold onto the ball long enough to get him the ball in the box. It’s understandable that Stam doesn’t want to expose his team at the back but eventually, he has to start to shift more players into the attack to help out Locadia. Zero shots over two matches for your designated player is unacceptable.

Medunjanin came in for de Jong for his first appearance since the birth of his child. He created van der Werff’s chance in the 90th minute that went just wide but was pretty active for his 20 minutes of play.

Caleb Stanko came in as a late sub for Kubo.