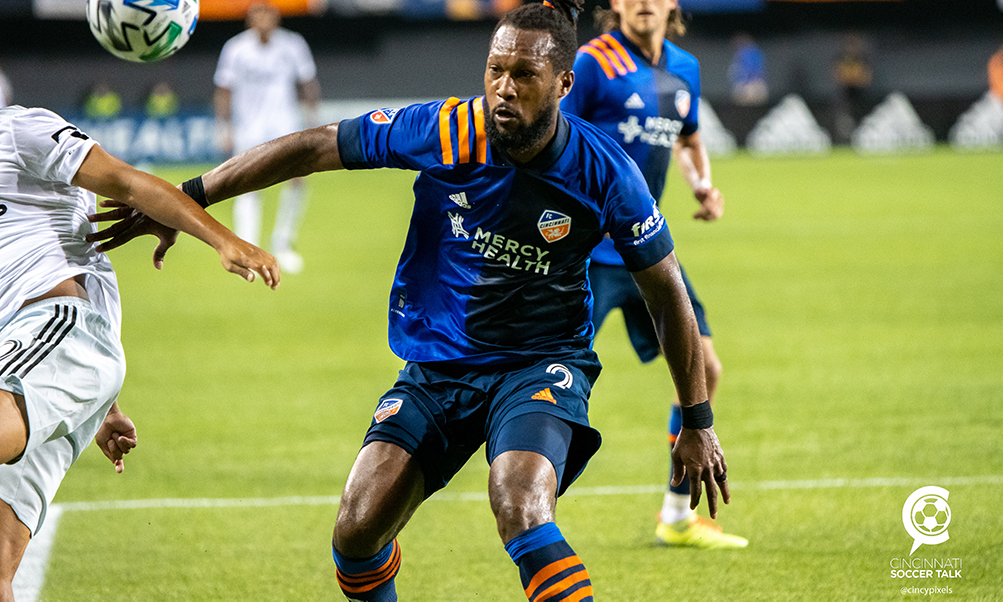 FC Cincinnati conceded twice in the first 10 minutes en route to a 3-0 loss Tuesday at the Chicago Fire.

FC Cincinnati traveled to Chicago feeling confident about its defensive game. Holding opponents scoreless in the last three MLS regular-season matches, the club was right to brag. Unfortunately, a pair of early errors all but ended the game after 10 minutes on Tuesday, and the Orange and Blue fell to the Fire 3-0 at Soldier Field.

The game started awful for FC Cincinnati. They lined up in their familiar 5-3-2 formation with Caleb Stanko and Frankie Amaya both playing as defensive midfielders. Less than two minutes into play, Stanko and Amaya were both sitting deep, leaving a large space in the midfield. Gaston Claudio Gimenez received the ball in that space and did not receive any pressure, giving him ample time to find Fabian Herbers darting past Mathieu Deplagne, who was struggling to keep up. Herbers received the ball behind the FC Cincinnati backline and chipped it into the net. The assistant referee raised the flag and the goal was called off, but VAR requested the center referee to review, and after review, Chicago was awarded the goal.

“I think at first sight, it looked like offside,” FC Cincinnati coach Jaap Stam said in his post-match videoconference. “And then, I’m sure somebody told him that he needed to have another look, then he gave a goal. I need to be honest to you as well, we shouldn’t get in these situations, a player gets that close to goal that he can score an easy goal like that or he can put the ball in the net. It’s up to ourselves, we know that the player made the run in between defenders. The gap was a little bit too big. The pass of the midfield player was good and accurate, and we gave it away. In the previous weeks, we’ve done very well to defend that. Of course, you want it to be offside, that would’ve been nice, but we brought it upon ourselves a little bit as well.”

FCC was off to a rough start, but it went from bad to worse in the 10th minute when Chicago struck again. FC Cincinnati was under pressure and attempting to clear the ball from the back. Both Stanko and Amaya dropped deep into the 18, creating a seven-man backline but leaving space again in the midfield. When the ball popped into the space, Álvaro Medrán had plenty of time to thread the ball between defenders and into the lower-left corner of the goal. Przemysław Tytoń dived but was unable to prevent the goal.

“The game became difficult because when you concede two goals that early, then you need to chase the game and the opposition, the results,” Stam said. “That makes it difficult because you concede two goals very early, that gets the players into a certain mindset as well. It’s not all the time positive, and you need to stick in there because you don’t want to concede anymore. You’re always looking for the moment to come out and hopefully score a goal yourself. In the first half, we were not as sharp, as aggressive as we needed to be. That can be in how we’re feeling, how we set up. It was a day of traveling, you never know. To concede the goal, I think it was in the second minute, we spoke about what they can do when they’ve got time on the ball and the runs they make and we still let them go in. They score that first one, and the second one, the second shot on target goes in. Then, it becomes difficult.”

Now, chasing the game, things only continued to get worse. In the 12th minute, Allan Cruz and Yuya Kubo both went for the same 50-50 ball, and Kubo’s shin collided with Cruz’s knee. Cruz stayed down and had to be attended to. Though, Cruz did eventually get up and resume play, ultimately the knock was too much and Cruz had to be removed from the game in the 27th minute, forcing an early substitution from Jaap Stam and leaving FCC without his dynamic attacking presence.

Though FC Cincinnati managed to get into the game a bit in the last part of the half, the damage was done. FC Cincinnati was more aggressive in the second half, but Chicago was comfortable absorbing some pressure and holding its two-goal lead. In the 67th minute, Chicago scored a third goal on a counter and nailed the coffin shut. They put 11 men behind the ball and let FC Cincinnati try to at least score a consolation goal, but FCC never presented any threat. The game ended with FC Cincinnati only managing a single shot on target.

Next up:
7:30 p.m. Saturday vs. Columbus Crew SC at Nippert Stadium