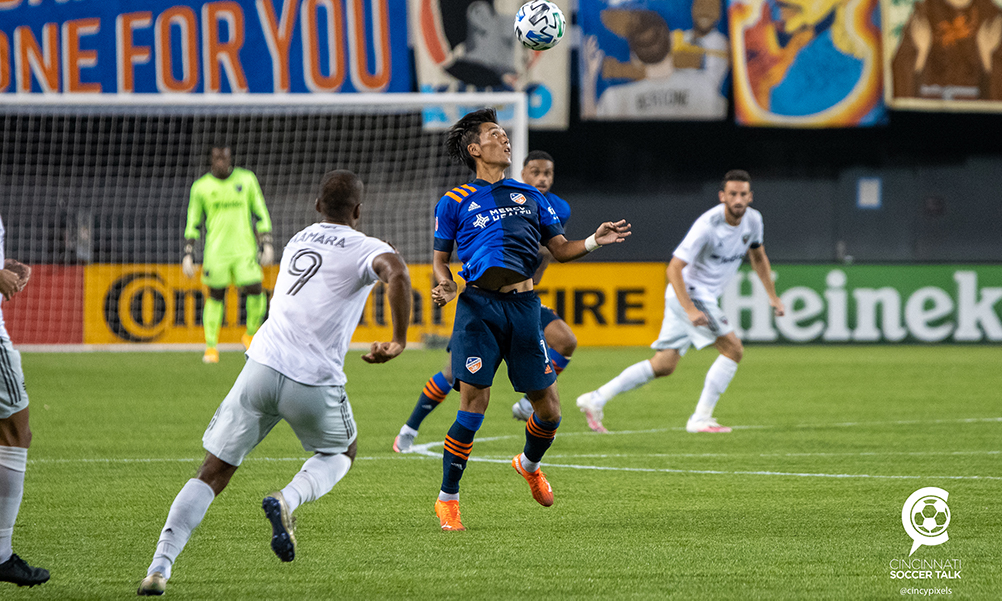 FC Cincinnati will look to continue its regular season unbeaten streak when it faces off against Chicago Fire FC on Tuesday.

FC Cincinnati will look to continue its three-game regular-season unbeaten streak against Chicago Fire FC at 7:30 p.m. Tuesday at Soldier Field in Chicago. This streak doesn’t include the Portland match due to that game being part of the MLS is Back Tournament knockout phase and not the group stage. FCC is currently in the MLS Eastern Conference playoffs with seven points total and a 2-1-3 record. Chicago is second-to-last in the conference, with just four points and a 1-1-4 record. The team currently has a three-game losing streak, including a 3-0 loss to FCC’s in-state rival, the Columbus Crew.

FCC returned to play with a 0-0 draw Friday against D.C. United. FCC looked off to begin the match, with passing looking sloppy and the team unable to get out of its own half. D.C. did not capitalize on this possession, with a couple of attempts coming close but not hitting the target. Considering the first 30 minutes of the match took place almost exclusively in FCC’s half, only allowing one shot on goal during the whole match is quite good. Following that time, FCC started stringing passes together and got looks at goal.

However, neither team had many real, outstanding chances on goal. The biggest chance for either team came late in the match. Allan Cruz played a ball from the middle of the field to Jurgen Locadia, who was running in from the right side towards goal. Locadia shot the ball with his left foot and got it past goalkeeper Bill Hamid, but it hit the post and bounced wide.

It is not known if FCC will continue playing in the 3-5-2 formation, but with Locadia returning, as well as the addition of central defensive midfielder Kamohelo Mokotjo pending his work visa, FCC could serviceably succeed. The team’s difficulties in defending have been messaged with having numerous players at the back, and it now has attacking power that can counterattack with just a couple of players.

Chicago, however, has not been looking good lately. The team just lost 3-0 to Columbus, as well as 2-0 to Vancouver and San Jose in the group stages of the MLS is Back Tournament. Considering how well the FCC defense has looked, and the inability of the Fire to score, this upcoming game should be a game for FC Cincinnati to stretch its muscles in terms of playing a bit more offensively.

Chicago’s biggest attacking threat has been forward Robert Berić, with two of Chicago’s four total goals in its six matches. Chicago Fire midfielder Djordje Mihailovic has tallied the most assists, with two, but defender Mauricio Pineda has been the most efficient, with a 90.2% completion percentage on 222 out of 246 passes.

FCC’s defense vs Chicago’s attackers — Chicago has struggled to score goals lately, while FCC has kept the opposition out of that same goal. Will this streak for FCC and Chicago continue, or will one finally give way for the other?

FCC’s midfield vs Chicago’s midfield — FCC has sometimes struggled to pass in between the outer thirds, and this has caused many chances to be lost and allows opposition’s midfield to take possession. But Chicago’s midfield hasn’t been outstanding either. Both teams have areas to improve, and this is one of them for both teams. Will FCC be able to string together enough passes to get to Locadia and Yuya Kubo, or will Chicago be able to keep the ball in FCC’s half with the team defending like it has the past few matches?

Note: A previous version of this article stated FCC was just outside of the playoff picture. However, there are now 18 teams in the MLS playoffs, meaning FCC is in the playoffs.