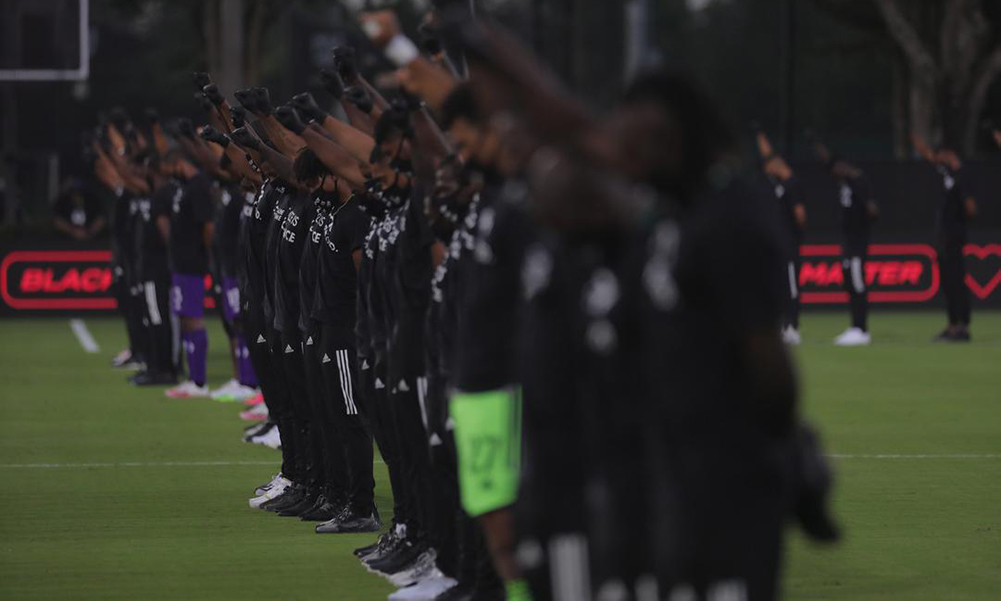 The Black Players for Change demonstration before the first MLS is Back Tournament group match is one of the lasting images of the tournament.

After 34 days, 51 games and enough humid, late night drama to fill a Tennessee Williams play, the MLS is Back tournament is over. The Portland Timbers donned their “Champions” face masks and lifted the newly minted trophy after a grueling tournament in Orlando, Florida. Their social media team wrapped up the event perfectly, tweeting “We’re going to Disney World.” Maybe they can return Kendall Waston’s ball from the Magic Kingdom.

Putting jokes aside, it’s impressive how successful this tournament turned out to be. In the age of COVID-19, very little gets universal praise. Fans, media, even players and coaches were happy with the tournament and (more importantly) the conditions they played in for over a month. The two sides who played in the final — Portland and Orlando City — clearly wanted to win. A berth in next year’s Concacaf Champions League, $300,000 in prize money and a new piece of silverware was enough to uplift the Timbers and disappoint the hometown underdogs.

It shouldn’t be taken for granted what a success this all was. Five weeks ago, everyone was reeling from the withdrawal of FC Dallas after positive test results and still speculating whether the same would happen to Nashville SC. Within the first days of the tournament’s beginning, 22 players had tested positive, and two teams had been withdrawn. MLS Commissioner Don Garber vowed to cancel the tournament if the situation continued to get worse. But it didn’t. Since July 10, no new positive cases were found in participating teams.

Credit must go to MLS and its medical department for creating (and maintaining) a bubble that held under pressure. The circumstances surrounding Dallas and Nashville were frustrating and upsetting, but there is no denying that the protocols worked for limiting outbreaks and preventing any others from beginning once in the bubble. Thankfully, this allowed for the games themselves to take the spotlight.

MLS has certainly garnered a reputation in the last few years. The league is known for producing plenty of drama and chaos, overshadowing the quality of play, no matter how much it improves each year. The MLS is Back Tournament was no exception, as there were enough late goals and red cards to last an entire regular season. Orlando, San Jose Earthquakes, Minnesota United and Los Angeles FC contributed the most to the wonderful chaos that came to exemplify MLS is Back. The late kickoff times only seemed to heighten the collective “what am I watching?” that many fans felt.

One of the biggest surprises of all was the Orange and Blue themselves, FC Cincinnati. Coming to Orlando as the worst team in the league last season, many speculated it would finish last in its group. But new head coach Jaap Stam changed that narrative and his tactics, leading Cincinnati to two wins and a very close penalty shootout exit against the eventual champions. The supporters groups should consider giving the coveted wooden spoon to Atlanta United and Inter Miami CF to share; both clubs failed to register a single win in the group stage, tying for the worst in the competition at -3 goal differential. The tournament clearly mattered, or else Frank de Boer would still have a job.

Despite the drama and surprises, plenty of amazing performances stood out. Diego Rossi was instrumental in keeping LAFC dangerous without Carlos Vela, scoring seven goals and winning the golden boot. Andre Blake won the golden glove after making 32 saves for the Philadelphia Union, helping them through to the semifinals. But the Most Valuable Player of the MLS is Back tournament should be Portland’s Sebastian Blanco. He led the competition in assists (five), and two of his three goals were game-winners. Orlando’s Nani had a career resurgence in this tournament, but winning the final tips the MVP in Blanco’s favor.

This tournament’s greatest achievement, however, was the introduction of Black Players for Change. Before kickoff for the first game, more than 100 Black MLS players took the field for their first public demonstration, raising their fists for 8 minutes, 46 seconds. This tribute to George Floyd, who was murdered at the hands of police in Minneapolis, was powerful to see on a national television sports broadcast. And it’s only the beginning for this movement.

And now, after MLS is Back, MLS is back again.

Tonight will see the resumption of the MLS regular season as Nashville travels to Dallas to make up for the first of three games the two sides could not play in Orlando. FCC will return to action on Friday, Aug. 21 as it hosts D.C. United at Nippert Stadium. The club has announced the first game will be held behind closed doors but hasn’t yet made a decision for the remainder of the season. As always, follow cincinnatisoccertalk.com for more coverage.