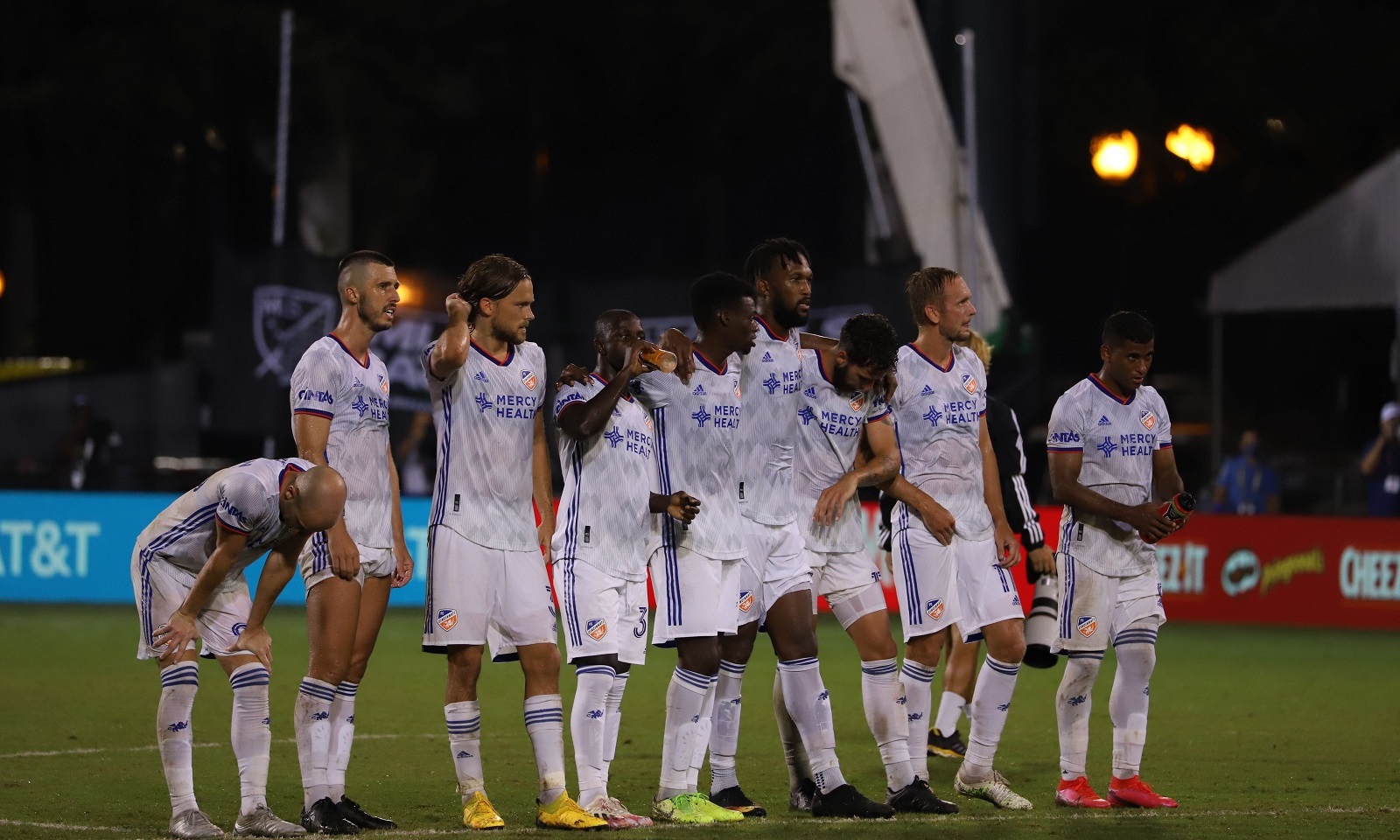 FC Cincinnati’s run in the MLS is Back Tournament ended Tuesday to the Portland Timbers on penalty kicks after a 1-1 draw in the Round of 16.

FC Cincinnati, the Cinderella story of the MLS is Back Tournament, stayed too long at the ball, and its carriage reverted to a pumpkin shortly after midnight Tuesday in the final game of the Round of 16, falling to the Portland Timbers on penalty kicks after a 1-1 draw in regulation. Regardless, the team that was never expected to advance to the knockout stage of the tournament had reason to be proud.

As expected, FC Cincinnati came out in its 5-3-2 formation with a plan to defend and stay compact. Soccer analyst Taylor Twellman accused FC Cincinnati of driving 11 buses to the field, but the Orange and Blue had no intention of changing the style of play that got them to the knockout rounds despite most of their bigger signings sidelined with injury.

“We did well, we defended well. We sat a little bit deeper at times,” said coach Jaap Stam via videoconference. “We had difficulties because they tried to create an overload on the sides – not that they created a lot of opportunities, but of course, when you’re dropping in deeper and deeper than at times, you can get in situations where it can be a risk by doing that, but they didn’t create a lot of opportunities. I’m sure they had the feeling that they had a lot of possession so they did very well, but they had the possession because we’ve given them the possession.”

The Portland Timbers like to play a defend and counter style of soccer, so this took some of the pressure off of the FC Cincinnati defense. Early in the game, Portland gave FC Cincinnati a lot of time with the ball, allowing it to probe forward and look for chances. Obviously, Portland hoped to draw out FCC and get in behind its defense. FC Cincinnati kept its defensive shape well, but also, despite having an opportunity, it didn’t capitalize on its chances.

Despite similar possession and passing stats, the Timbers looked the better team in the first half. Portland took all five of that half’s corner kicks and took four shots on target versus FC Cincinnati, who only managed one.

Stam was disappointed his team didn’t produce more opportunities in the first half.

“I think in the first half, we came out a couple of times very good,” he said. “We had space that we knew from the start that we were going to create. The only thing is that sometimes you need to be a bit more brave, you need to be a bit more accurate in your passing and going forward. Eventually, when you get into areas around the box, you need to have a shot as well and trying to score. Sometimes we took too long, we wanted to find the next play every time and then the situation of creating opportunities is gone.”

The second half started much the same, but around the 60th minute, things opened up. FC Cincinnati made three substitutes, and it looked like it would take the lead when Mathieu Deplagne put the ball into goal off a free kick, but VAR ruled he was offside. Only minutes later Portland made their first substitute, bringing in Jaroslaw Niezgoda. Whether it was the changes to FC Cincinnati’s lineup that caused some miscommunication, the disappointment of the offside call or whether Niezgoda came in with a plan from Portland coach Giovanni Savarese doesn’t matter. Within three minutes of taking the pitch, Niezgoda found the back of the net, completely changing the game. FC Cincinnati now needed to find an equalizer or go home.

Jürgen Locadia was brought onto the pitch to the surprise of many. There had been whispers that he would play versus Portland, but Stam had downplayed earlier this week, saying he wasn’t ready and was unlikely. Stam again showed he was willing to adjust to the situation, and losing the game meant a trip home and the end of the tournament.

Despite his obvious fitness issue and a lot of rust he needed to shake off, Locadia made an immediate impact on the game. FC Cincinnati shifted to a 4-3-3 formation with Joseph-Claude Gyau pushing forward and Siem de Jong dropping in behind Locadia. With Gyau and Allan Cruz now pushing the Timbers flanks and Locadia providing quality hold up play, the Portland defense had to adjust. Eventually, Portland made an error. Goalkeeper Steve Clark failed to recognize how close Cruz was when he played a ball with his feet and was forced to make a last-minute dive to recover that brought Cruz down in the penalty box, earning FC Cincinnati a penalty kick. Locadia stepped up and despite Clark guessing correctly, the ball was struck wide and low, and FC Cincinnati was now equal.

It was apparent Stam had a plan if FC Cincinnati went behind, and that the team not only understood but executed that plan.

“After that, you need to do something, and you need to change things in the team, and we went back to the 4-3-3 which we also can play, you need to take a little bit more risk, you need to go forward,” Stam said. “We’re bringing in a couple of other players as well, a couple of subs, and I think they’ve done very well, they’ve helped us forward. After that, I think we were the better team. We created, we dominated. We made the equalizer eventually as well by getting the penalty.”

The last 10 minutes of the game was pure excitement as both teams pushed to avoid a draw and penalty kicks. Portland got more possession in the second half, but both teams managed four shots on target. Locadia showed his rust, missing a tap in from point-blank range. Portland had a shot that grazed the crossbar. The match ended 1-1 and went to penalties, where FC Cincinnati eventually fell to the Timbers.

Fans and analysts will question Stam’s choices for taking the PKs. They will critique Locadia for failing to win the game for Cincinnati despite obviously not being ready to return to play. For a team that wasn’t expected to advance from group stages and with the lowest odds of winning the tournament, the Orange and Blue did pretty well and should be proud.

“We’ve won two very difficult games,” Stam said. “The third one, this one, we equalize of course, it gives the players a lot of confidence in the team as well in what they’re doing. … Also today, we had an opportunity, we had a chance to win this game, which we didn’t, the players are disappointed. And that’s a very good thing, that’s very positive. We need to keep on working, we need to keep on building from what we’ve been doing the last couple of weeks, and then hopefully we can make steps and then get points in the league.”

Matthieu Deplagne was already looking ahead.

“It’s a strange feeling because after one month without the families and everything, for me, it’s the first time in my professional career like to be in a bubble seeing nobody and just playing football, Deplagne said via videoconference. “Now it’s about (recovering) after this weather and these other games. It’s special, too. For us, it’s like a bit of rest and continue the season.”