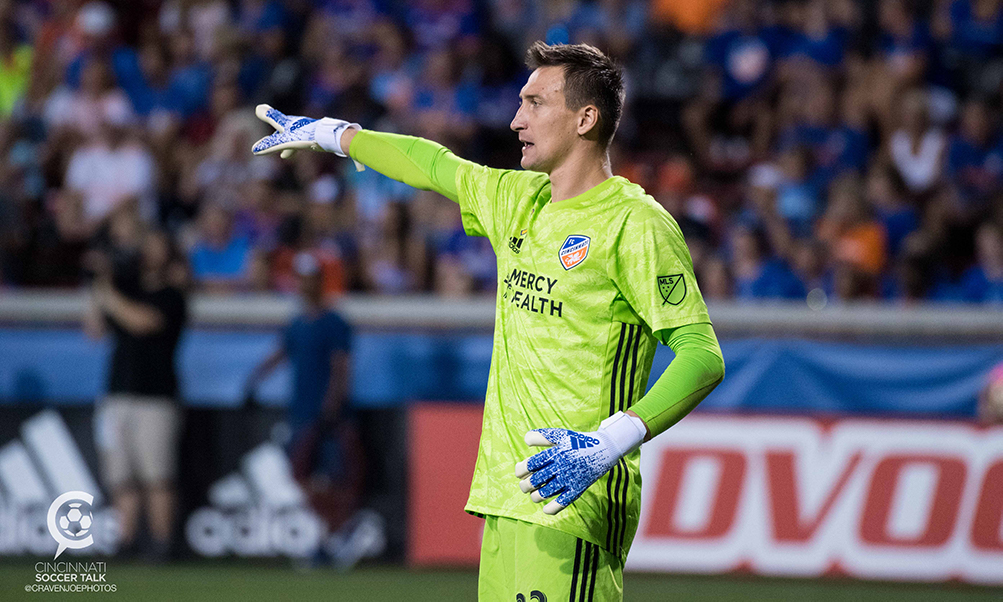 Goalkeeper Przemyslaw Tyton said FC Cincinnati wants to make it to the MLS is Back Round of 16 automatically with a win over the New York Red Bulls on Wednesday. “It’s time for us to get some results,” Tyton said on Monday.

The FC Cincinnati faithful have undoubtedly been watching MLS is Back Tournament group play with a vested interest in the results since the Orange and Blue knocked off Atlanta United on Thursday.

That victory put the club in contention for knockout play, which begins Saturday. Should FC Cincinnati (1-3-0 overall, 1-1-0 with three points in group play) beat the New York Red Bulls (2-1-1 overall, 1-1-0 with three points in group play) on Wednesday to finish group play, it will clinch a spot in the Round of 16 with a second-place group finish. A draw ensures a third-place finish, but the club would need some help to advance.

The players, like the fans, have been paying attention to the action in other groups. But goalkeeper Przemyslaw Tyton doesn’t want to have to rely on any help. He wants to make a statement with a victory.

“I want to win the game,” Tyton said Monday via videoconference. Tyton’s clean sheet against Atlanta was the club’s first of the season.

“I want to compete, I want to show that we are in a good way, because we work hard during the time we are here. It’s time for us to get some results. Not only one game but to continue to grow.”

With a draw, FC Cincinnati would finish group play with four points and a -3 goal difference, the tiebreaker after points. Four of the six third-place teams will advance.

FC Cincinnati heads into Wednesday with confidence, a product of the Atlanta result.

“You can see that the feeling is very good within the roster of players that we have,” FC Cincinnati coach Jaap Stam said Monday via videoconference. “I’ve said it many times before, if you get a result, that does a lot more than having good training sessions.”

Getting a result against the Red Bulls will likely mean dealing with their high press. New York

is coming off a 2-0 loss to Columbus Crew SC but opened group play with a 1-0 victory over Atlanta.

“We need to stay good as a defensive shape,” Tyton said. “We have to respect our position on the field. We have to see what is best for the team at this particular moment. We have to stick to the plan. I’m pretty sure that we’re going to prepare well for the next game because we took lessons from the first game. We know that we have to play better. We have to be more focused on the moment and don’t give up that early. I don’t want to say we gave up (against the Crew), but if you concede early two goals, it’s tough to play. But we are an experienced team, and we have to deal with it. I expect the next game, we are going to present much better.”

FC Cincinnati veered from its standard 4-3-3 formation against Atlanta, changing to a 3-5-2. Stam indicated there could be some additional changes on Wednesday.

“We need to be realistic in what we are going to do and what we can do, but every game’s different,” Stam said. “So we need to approach this game maybe a little bit different than we did the Atlanta game because of their set-up and what they’re doing. We’re confident if we can do the same thing in terms of being positive in our minds and working together, have a lot of communication on the pitch as well as showing our ability at times, then we can make it very difficult for them.”

Should the club advance to the knockout stage, it will give Stam at least one more evaluation period between the tournament and the resumption of the regular season.

“That’s very, very valuable,” Stam said. “It’s very important. Because you want to play as many games as you can to know your players even better and how you want to play and what’s the ideal formation for this time in this moment?

■ INJURY UPDATE: Stam said Jurgen Locadia (quad) and Siem de Jong (groin) are improving but as of Monday had not rejoined training sessions. They’re listed as questionable in the club’s media notes for Wednesday.

Jimmy McLaughlin (ankle), Spencer Richey (concussion) and Maikel van der Werff (groin) are listed as out. Allan Cruz and Greg Garza are not listed on the club’s injury report.