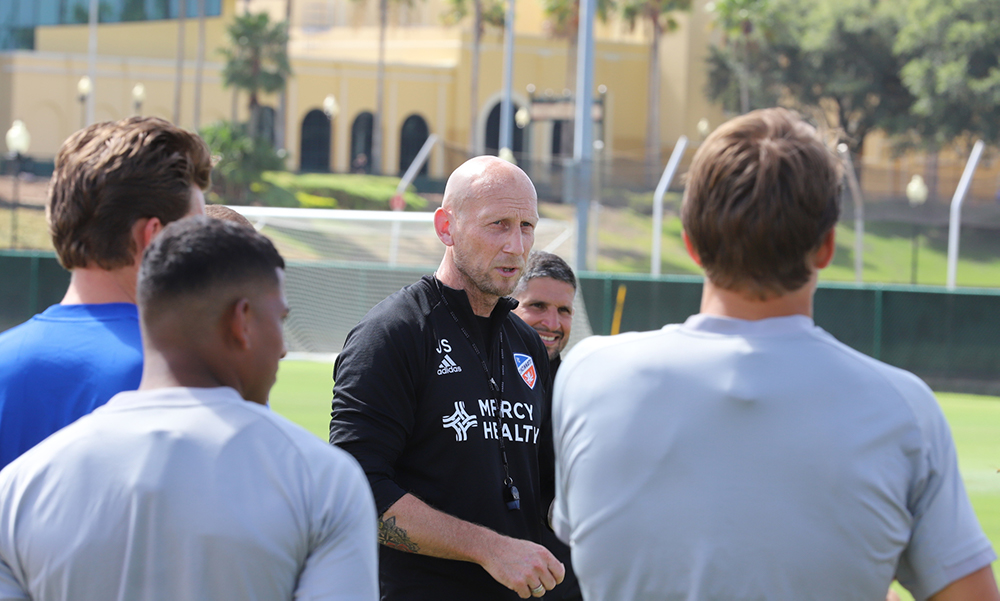 MLS allows clubs 90 minutes each day for training in Orlando, Florida, to get ready for the MLS is Back Tournament. New FC Cincinnati coach Jaap Stam would like to go longer.

Isolated on the seventh floor of the Swan and Dolphin Hotel, FC Cincinnati players are growing accustomed to their collective isolation. Aside from three game rooms where they can play board games or cards, the players are confined to their rooms when they aren’t training in the oppressive Florida heat. If FCC training near Disney World can be likened to boot camp, then Jaap Stam is the drill sergeant.

Since the former Manchester United man took over as head coach in May, he has made quite the impression on the second-year MLS expansion club. During his playing days, Stam was a ferocious defender. He brings an identity that FCC has lacked since joining MLS, where it has leaked goals at record volume.

Stam has the respect of his players, and not only because of his 6-foot-3, 201-pound stature, but because he’s a man who knew nothing but winning as a player and who now has taken the reigns of a club that is eager to stop losing.

“He was at the top as a player,” said FCC defender Tom Pettersson via videoconference. “If he can’t teach us stuff, then who can?”

Stam won three Premier League titles, the UEFA Champions League, and an FA Cup while at United. He now takes over a club that is coming off one of the worst seasons in MLS history, but with a revamped roster, a new stadium on the horizon and the desire to turn some heads during the MLS is Back Tournament set to begin later this month.

Temperatures have been in the low to mid-90s in Orlando, Florida, this week. The MLS allows clubs to train for 90 minutes. Stam wants more.

“We get the 90 minutes, but we’d like to go longer,” said Stam on Tuesday. “We are asking a lot from the players to do the drills at a certain intensity and a certain pace. We need to use every minute.”

This roster has played only two matches together and lost both by a 5-3 aggregate. So much has happened since the beginning of March. The MLS season was halted due to the COVID-19 pandemic, the players spent three-plus months training via Zoom and communicating with teammates via social media, and now they’re back training to get ready for matches against Columbus Crew on July 11 followed by scheduled matchups against Atlanta United and New York Red Bulls.

But these aren’t exhibitions for Stam and FCC. He has something to prove, and so do his players.

“He wants to teach us,” said FCC forward Kekuta Manneh. “He’s very patient. But he’s also really demanding, and that’s what we need. Everyone has a good impression of him. He has a style he wants to play. He wants to play with pace. He wants to go forward. He’s got a little different flavor of everything we want to do. He always says he wants to see more intensity. You see it in training. It’s been very challenging for the players, but fun at the same time. I like where we’re headed with him.”

Pettersson and the other FCC defenders, particularly those who were on the squad last season, do not want a repeat of last year’s dubious mark of 75 goals allowed. FCC was scored upon three times in the first two regular-season matches played this season. If they are going to take full advantage of a revamped attack led by Jurgen Locadia, Yuya Kubo and Brandon Vazquez, FCC needs to take heed of Stam who contributed to 22 clean sheets during his playing career.

“You see the results we had in the past,” Pettersson said. “I think he’s very clear what he wants. He demands a lot from us, which is very good. That’s exactly what we need right now. With the player he was, he gets a lot of respect for that. It’s pretty intense since he got here. He can teach us so much. He’s already started with small details for the defenders to think about.”