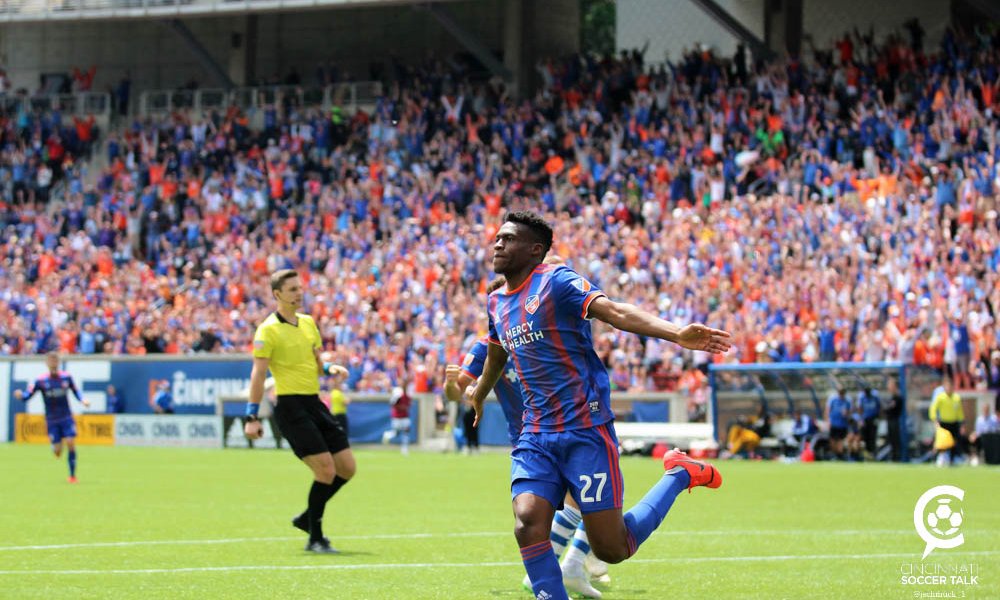 FC Cincinnati announced Tuesday it is committing $250,000 to organizations working to address racial disparities and discrimination. In a recent podcast, however, Fatai Alashe said the club’s response to the Black Lives Matter movement and recent events has “been really bad to be honest. I’ve been super disappointed.”

FC Cincinnati announced Tuesday that club investors have committed more than $250,000 to the FC Cincinnati Foundation to local community organizations that work to address racial disparities and discrimination.

Additionally, the foundation will provide $100,000 in grants given to organizations in support of community-building initiatives such as meals to students and parents in West End-area schools affected by the COVID-19 closure and re-starting several summer soccer camps and in-school and after-school soccer programming in the fall. The West End Pride soccer teams will play in SAY soccer in the fall, according to the release.

“Since our initial club statement opposing racism, we have been talking with and listening to our partners, players and staff about a stronger response that includes a plan of action,” FC Cincinnati president Jeff Berding said in a club media release. “We believe that we must all be vigilant in working to address systemic racism that unfortunately exists within our country and local community.”

The club is reviewing areas where it can improve efforts and is building a culture of inclusion within the organization with multiple meetings with business and soccer staff to plan meaningful action beyond this funding commitment, Berding said in the release.

Berding said he, general manager Gerard Nijkamp and coach Jaap Stam met with players, coaches and support staff last week to discuss how they can support players, staff and community, and those talks will continue.

“We are working with one another to ensure everyone feels included and supported as part of the FC Cincinnati family,” Berding said in the release.

“Finally, it has been recently brought to my attention that some of our players have endured personal and racial attacks on social media. I am outraged by the vile sentiments directed to them. I have spoken numerous times with our players, staff and supporters about the culture of inclusion we are building at FC Cincinnati, and there is no place for racially offensive words or actions in our club. Appropriate action will be taken to ensure those with such sentiments are prohibited in our club.”

A fan said in a tweet Monday that FC Cincinnati players Fatai Alashe and Joseph-Claude Gyau should start their own segregated league. This came after Alashe and Gyau gave interviews about their thoughts on the Black Lives Matter movement and recent events.

The club responded to the tweet on Tuesday, saying in a social media post, “We stand firmly with our players and our supporters against racism. It has no place in our organization and it will not be tolerated. The individual with the racist tweet directed at our players last night will never be permitted to attend another #FCCincy match again.”

As a guest on a recent BackYardFooty podcast, Alashe said some attacks came after former coach Ron Jans resigned from the club in February. Jans left after reports of him using a racial slur in the locker room. Jans admitted to using the slur.

On the podcast, Alashe said the club’s response to the Black Lives Matter movement and recent events has “been really bad to be honest. I’ve been super disappointed.”

It’s unclear when the episode was recorded, but it was released Monday and is the second part of a Black Lives Matter discussion. The first part was released on June 5.

Alashe was responding to a question asking the guests, which included several MLS and USL players, how their respective clubs have responded to the movement and recent issues involving racism.

On the podcast, Alashe said the circumstances leading to Jans’ resignation “kind of got brushed under the rug. They let him resign. So we had fans that were blowing us up like n—– this, n—– that, calling us all types of s— as if we did something wrong in that situation. And the club did nothing to really back us. All they said was, ‘Yeah he resigned.’ Didn’t give a reason. Didn’t tell the story of what actually happened. They kind of just let the public decide what really happened.”

The club’s initial statement regarding the Black Lives Matter movement and recent events was “some super-generic two-sentence statement,” Alashe said on the podcast, and he asked Berding why the club wasn’t doing more.

“His reasoning was they’re doing a bunch of stuff behind the scenes basically that we don’t know about and they’re having meetings with the whole staff in the club,” Alashe said on the podcast. “He said we’ve had weekly meetings and we’ve discussed this stuff multiple times in these meetings.