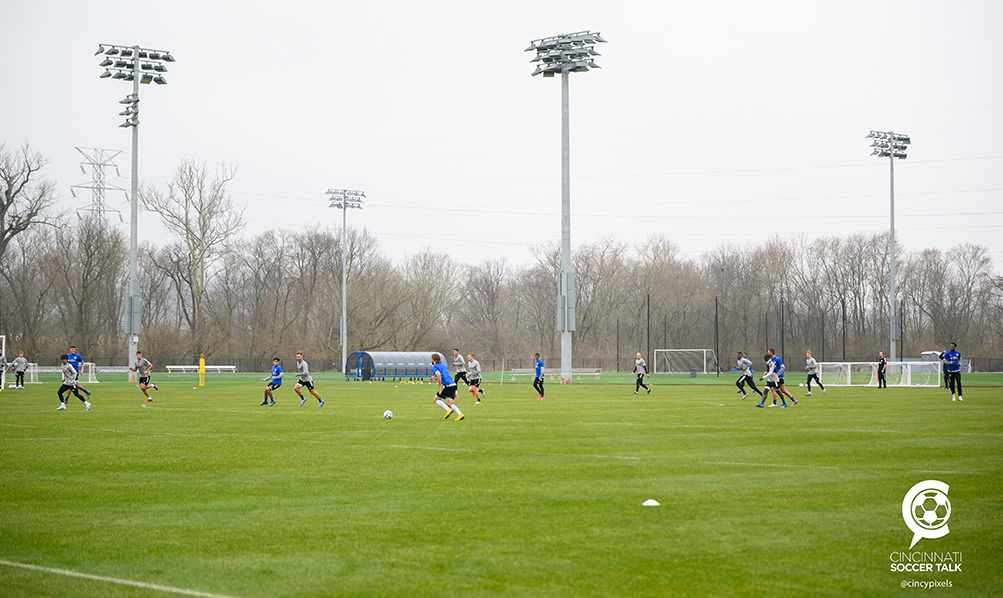 FC Cincinnati midfielder Haris Medunjanin has much to ponder during the MLS suspension of play because of COVID-19. Medunjanin’s wife is in Israel, pregnant with their first child.

Haris Medunjanin has plenty of things to occupy his mind while in isolation.

As COVID-19 persists and the MLS season remains on hold, the FC Cincinnati midfielder and Bosnian international is quarantined with his thoughts.

First among them is his wife, Moran, who is living in Israel with her family and pregnant with the couple’s first child. As misfortune would have it, the lockdown went into effect before the spouses could reunite. The baby is due in August.

“It’s a difficult time for me,” Medunjanin said via video conference on Tuesday. “She’s with her mother and sister right now and she’s doing well. I’m just worried about whether I’m going to make it over there or she’s going to make it over here, to see the birth of the child. It’s the first child, so I want to be there.”

The couple was married in July. As a new husband, first-time father and a 35-year-old professional soccer player, Medunjanin has a lot to consider in terms of his future. He wanted to make family a priority while working in soccer in some capacity, perhaps as a youth coach.

Medunjanin charted the course for the remainder of his career until COVID-19 added a detour.

“It’s tough, because it’s the end of my career,” Medunjanin said. “I’m always positive. We’ll get through this. Things will get back to normal. I want to be with my family and my child first. I have time to figure things out.”

He didn’t want to leave Philadelphia Union after three seasons, but the writing was on the wall when his contract ran out and sporting director Ernst Tanner began to revamp the roster.
So Medunjanin chose to join FCC. Like many players, he was drawn by the project that was underway, the big crowds at Nippert Stadium and his familiarity with then-head coach Ron Jans.

But Jans was dismissed and the pandemic put the brakes on the season before Medunjanin was able to experience any of it. Even an abbreviated regular season would feel empty, he says, especially if it’s played in stadiums bereft of fans.

“It would be nice to experience this,” Medunjanin said, of the Nippert atmosphere. “Hopefully next year will be better. But we’ll have to see whether I’m going to be here next year or not. It’s difficult. Everybody wanted to play games in front of the crowds and experience that feeling.”

Medunjanin, who has scored 58 goals in 417 appearances in all competitions, still feels like he can compete at soccer’s highest level. He knows his body well enough that once he can’t, he’ll call it quits on his own terms.

“I will be the first one to say that’s enough,” Medunjanin said.

Medunjanin already is laying the groundwork for his future as a youth soccer coach. In training this past summer, he was lauded for his veteran leadership and the impact he was having as a mentor for some of FC Cincinnati’s younger players, most notably former No. 1 overall draft choice Frankie Amaya.

If Medunjanin’s FCC career ends before it really began and he doesn’t return next year, perhaps his legacy will be Amaya.

“It’s up to him,” Medunjanin said. “I will always believe in him. The potential is there. Hopefully he can stay smart, work on his body and stay fit. When we get back, he can show to the people he’s a great player.”

Medunjanin is still hopeful that MLS will return this season and said he’s encouraged by the news out of Germany this week that Bundesliga is going to restart May 15. But he admits there’s still a lot of uncertainty, especially surrounding the league’s approval to begin individual training sessions next week.

“It’s still a mystery to us,” he said. “Some say (training) is mandatory, some say it’s voluntary. They are still debating if it’s safe. We also need to talk to the players’ union. Nobody has a clear answer for us. What’s the point to train if we don’t know the dates when we’re going to play?”

For now, Medunjanin has much to ponder. Through all of this, the Sarajevo native said he’s gained some valuable perspective.

“Everything that’s going on with the virus right now, soccer is not important,” he said. “What’s important is the health of everyone. What’s also important is to stay safe, (that) my family is safe, and everyone’s safe. Soccer can always wait.”