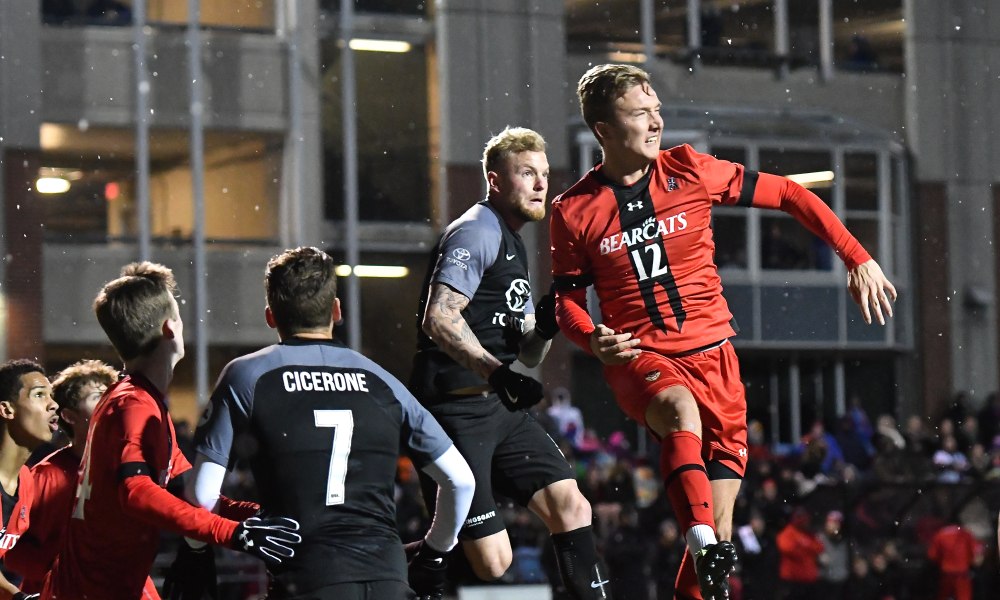 In what comes as a major shock to the Cincinnati soccer community, new University of Cincinnati athletic director John Cunningham announced Tuesday the school will cut its men’s soccer program effective immediately.

In what comes as a major shock to the Cincinnati soccer community, new University of Cincinnati athletic director John Cunningham announced Tuesday the school will cut its men’s soccer program, effective immediately.

The University released a statement Tuesday morning crediting their decision to ‘profound challenges and widespread uncertainty’. Cunningham did not clarify this point, but one can assume that UC will be looking to tighten their “financial belts” as budgets will be affected in the aftermath of COVID-19.

All men’s soccer players currently receiving athletics scholarships will have those honored if they wish to remain and continue their undergraduate studies at UC. Players will also be granted their immediate release and can transfer without penalty.

The program has been leaderless since March 13, when longtime coach Hylton Dayes stepped down from his post. While not a perennial title contender in the American Athletic Conference, the program was not without success. The Bearcats made the 2003 and 2006 NCAA tournaments while members of Conference USA and then the Big East Conference. UC had a 5-11-1 record in 2019 and hs not had a winning season since 2016 (9-7-1).

Part of the uncertainty may also be related to the upcoming NCAA schedule change and new issues surrounding it. The NCAA was to vote April 22 on a measure that would move its calendar from the traditional three-month fall season to a full academic year schedule with matches in the fall and spring.

The discontinuation of men’s soccer at UC will leave the NCAA with 203 Division I men’s programs. The further loss of the University of Connecticut to the Big East will leave only six sponsored teams in the AAC for 2020. Further changes to the conference’s men’s soccer offering could be imminent.

Many will debate the rationale of cutting the program with the success and popularity of FC Cincinnati in the region. The program can boast the likes of former FCC players Omar Cummings, Matt Bahner and Michael Millay. Unfortunately, the immense popularity of FCC did not translate to large attendance numbers at UC. With the economic struggles ahead, it is possible that the UC men’s program is the first of many college athletic programs to be discontinued.

Please see the statement from Cunningham below or at GoBearcats.com.

During this time of profound challenges and widespread uncertainty, I have intensified my effort to study and consider the broad spectrum of the UC Athletics Department. This has included a comprehensive and thorough review of our sport offerings and the long-term budget implications of supporting the number of student-athletes currently at UC.

Based on this review, and in consultation with the President and other University leaders, UC Athletics will no longer sponsor a men’s soccer program. This decision is effective immediately. All men’s soccer student-athletes currently receiving athletics scholarships will continue to receive the scholarships for the remainder of their respective undergraduate academic careers at UC. Alternatively, we will assist in finding new schools for those who desire to continue their collegiate soccer careers.

This difficult decision involved a tremendous amount of thought regarding the young men who chose UC to pursue their degrees and their dreams of playing NCAA Division I soccer. They have worked extremely hard on the field of play and in the classroom and have represented UC the right way. While they might not fully understand this decision, I want them to know that they were truly and conscientiously considered during my deliberations about the future of UC Athletics. We are making this decision now to enable our men’s soccer student-athletes to have an opportunity to play at another institution if they choose to do so.

I am most sincerely grateful to everyone who has supported the men’s soccer program at the University of Cincinnati. This includes former coaches, former student-athletes, donors and fans. Your legacy at UC will not be forgotten and your accomplishments will continue to be recognized.