Rumors persisted this week that the U.S. Soccer Federation was planning to dissolve the U.S. Soccer Development Academy which could lead to some MLS clubs closing their academies.

But on Tuesday, FC Cincinnati reassured its academy players and their families that the FC Cincinnati Academy’s future is not in jeopardy.

Cincinnati Soccer Talk obtained a copy of a letter the club sent on Tuesday to families in response to the rumors.

“During times of crisis it’s common for rumors, speculation and innuendo to take root, which only serve to further the anxiety of not knowing and not being in control,” it read in part. “We have built our relationship with you – our FCC Academy families – on trust, honesty and transparency. We do not deal in rumor and do not spread misinformation.”

According to sources, the rumors originated with other clubs who claimed FCC’s academy was folding, given the rumors about the U.S. Soccer DA dissolution, the current suspension of the MLS season due to the COVID-19 pandemic, and financial concerns.

“Not only are the rumors 100 percent false,” said one source. “but there are expansion plans in place both for the FCC Academy itself and also at the grassroots level with increased work and partnerships with regional clubs to help increase the level of play in our area (via education and coaching programming).”

The source added that there has been no communication to substantiate rumors of the U.S. Soccer DA’s dissolution from either U.S. Soccer or MLS.

In the letter sent to families, FCC was direct in dispelling the rumors:

“We are steadfast in our goal of building the FC Cincinnati Academy to be a key driver of soccer in the entire Tri-State area and being the engine to grow the game in our entire region. As the professional academy of MLS’s FC Cincinnati, our mission is to develop players for our first team.

Leagues, tournaments, matches and exhibition matches are all pieces of our competitive platform, but no single entity drives our mission. As a professional development academy, we always have contingencies in place should competitive platform offerings change. And options change quite frequently.

Planning for the 2020-21 FCC Academy season is already underway and we look forward to beginning our second full season.”

Some of the speculation stems from the fact that shutting down the U.S. Soccer DA has been suggested for some time, and if the USSF is going to make such a move, there might be no better time than now, with all 2019-20 competitions suspended due to the COVID-19 pandemic.

Much like it has for first-team players, FCC’s technical staff has leveraged technology to maintain communication with its academy players to continue their development.

In the letter to families, the FC Cincinnati Academy was called “an integral piece to the future of the club” adding they were looking forward to their second year as a professional academy program in 2020-21.

Here is a copy of the letter sent out to FC Cincinnati Academy parents: 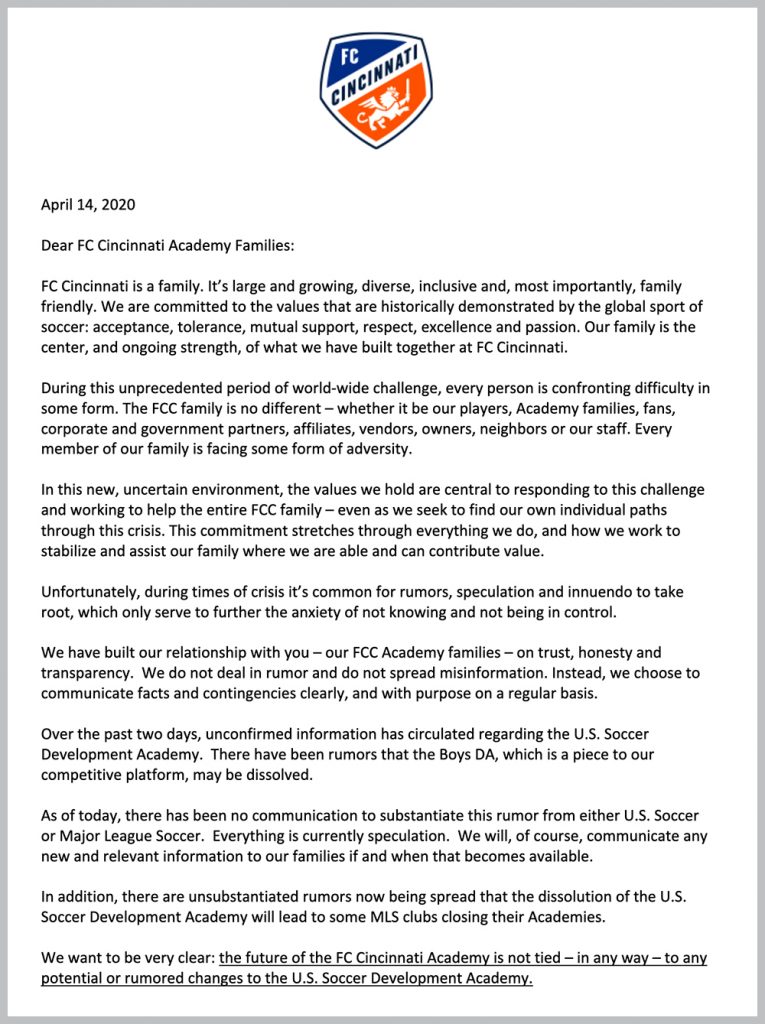