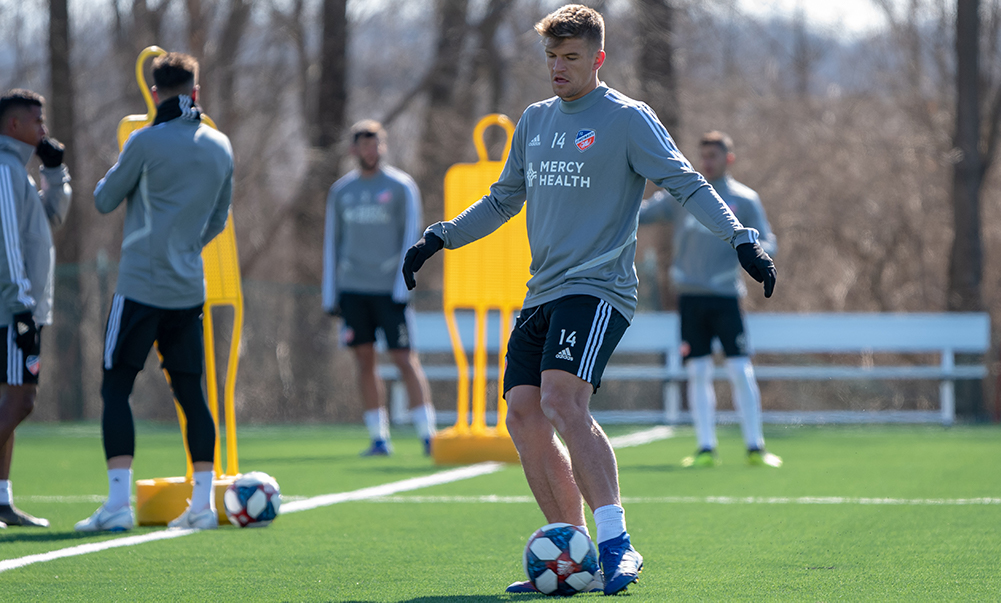 With Ohio’s shelter-in-place order to battle COVID-19, FC Cincinnati players are not allowed to train at the Mercy Health Training Center. But director of sports performance Gary Walker has individual training plans for the players to follow at home.

When Gary Walker left Manchester United to become FC Cincinnati’s director of sports performance last March, he was prepared for new challenges in MLS after 11 years in England. He was ready for more intense travel, challenging weather conditions and a new league and football culture.

But what Walker could not have envisioned — what none of us could have envisioned a year ago — was the COVID-19 pandemic bringing death and disruption to the world and professional soccer to a grinding halt.

“This is something nobody has ever experienced before,” Walker said.

So rather than being in Mercy Health Training Center this week helping prepare players for the April 5 match vs. Atlanta United at Nippert Stadium, Walker is quarantined in his home, spending quality time with his family but socially distanced from the players he was hired to help.

With the start of the MLS season pushed out to May 10, a training moratorium in place until at least March 27 and a shelter-in-place order in effect in the state of Ohio, FC Cincinnati’s training ground in Milford is a ghost town.

But that doesn’t mean Walker’s work has stopped. Far from it.

He communicates regularly with players via phone and Skype, making sure they are eating right, and staying on track with their individually-tailored training programs.

The players are sent questionnaires to help them self-reflect on their strengths and weaknesses so the technical staff can group them together in areas of focus. Even though Walker isn’t able to speak to the players face to face, the communication is constant.

“We can’t see them every day, so we try to communicate as much as possible,” Walker said. “About how they’re sleeping, their muscle soreness, their energy levels, to give us a real idea of how the players are responding to what we’re asking them to do.”

What’s being asked of them depends on the player. Just like they would be under normal circumstances, training programs are matched to the individual needs of each player, down to the limb.

“We look at each players’ injury history,” Walker says. “Is the right leg stronger than the left? We know a large asymmetry predisposes players to injury. A goalkeeper is not the same as a right-winger. Wide players are given more high-intensity running. It’s tailored by position.”

This approach isn’t any different than if the season was underway. But few things are normal at the moment. The players aren’t permitted to come to Mercy Health Training Center, where they’d have access to state-of-the-art strength training equipment, pristine soccer pitches and intricate nutrition plans. With the quarantine in place, the players are at home, some surrounded by family and kids, some living alone, but all having limited workout equipment with all the gyms ordered to be closed.

FC Cincinnati provided its players with some training tools, and Miami Athletic Club in Milford is allowing the team to borrow some equipment while they’re closed. But that’s it.

“Our facility doesn’t have enough equipment to give all the players access to all the equipment,” Walker said. “We gave them resistant bands, mini bands and wobble cushions so they can do ankle stability work. We try to be creative with what we’ve got.”

Each player is given a daily program and is expected to check in to report progress and let Walker know how their body is responding. Maintaining cardio and lung health is the easier part, with players able to run individually. Other strengthening activities must be accomplished without adequate equipment.

Nutrition is another challenge. As professional athletes, the players know how to take care of their bodies. But again, this isn’t a normal situation. Walker said players have had difficulty eating right because grocery stores aren’t stocked with the meats and proteins they require. The players are provided supplements to help support their immune system, but without the structured meals at the training facility, it’s something that must be closely watched.

“It’s more difficult for the younger players or players who live alone,” Walker said. “It’s an education piece really for us to make sure they have the proper calorie intake.”

Another important consideration is the mental aspect. Like all of us, the players are isolated, many a long way from most of their family and friends. And like most of us, technology is helping them bridge that gap.

“We will communicate via FaceTime like everyone else, but it’s something you need to be aware of,” Walker said. “We do one-on-ones via Skype. Some of our players are away from their families.”

When a firm date is set to start the season, the players must be ready to hit the ground running, quite literally. The longer players are removed from a normal training schedule, the greater the risk.

“The health and safety of our players is important because we’re going to have to play a large number of games in a short period of time,” Walker said.

With the training center now closed, FC Cincinnati’s two rehabbing players – midfielder Andre Regattin and goalkeeper Bobby Edwards – had to go home. The good news is Edwards is now fully fit. And, Walker said the club took a stationary bike to Regattin’s home and he is on a daily exercise regimen.

Like the rest of the world, Walker is coping with the current situation, taking advantage of some extra time with family and staying focused on the task at hand.

“I’m spending a little more time with the kids, which is nice,” he said. “What we’re asking our players to do is follow our programs, have regular communication with us and use the technology that we’ve provided.”