Brad Gough breaks down Atlanta United’s two goals and the buildup to Yuya Kubo’s strike from Saturday’s 2-1 loss in this version of How They Happened.

FC Cincinnati fell to 0-2-0 on the year <after suffering a 2-1 defeat at Atlanta United> on Saturday. The home side took a 2-0 lead before the Orange and Blue pulled one back to make the match’s finish a bit more interesting. Here’s a look at how the goals happened.

The leadup to the opening goal began with a goal kick from keeper Spencer Richey. Yuya Kubo won the ball, but due to the FCC front three being positioned so narrowly, he found himself with no options going forward. Had Joseph-Claude Gyau or Jürgen Locadia moved into the wide areas (yellow), the team could have exploited the open space on the pitch. Instead, attempting to dribble out of the situation, Kubo was easily dispossessed. 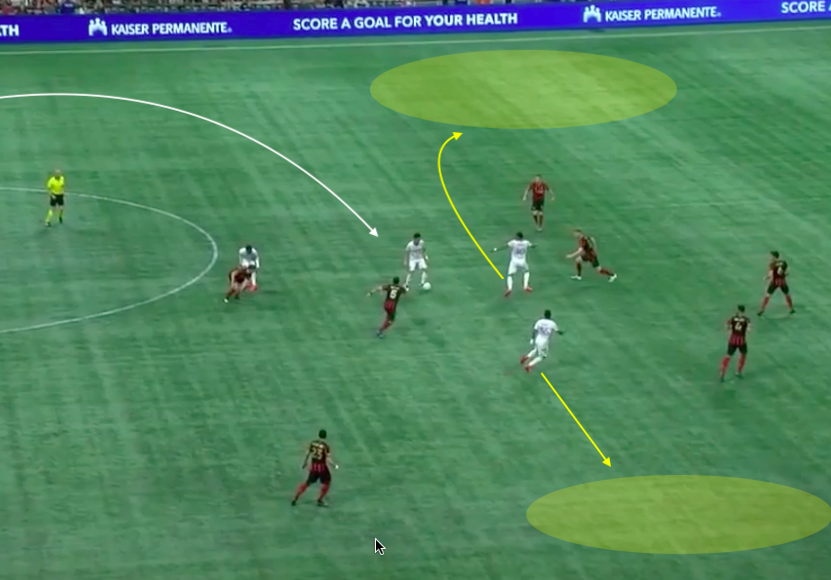 Atlanta United looked to counter quickly and capitalize on the FC Cincinnati team being caught transitioning forward. It moved the ball to the right flank where Greg Garza (highlight) got caught in no-man’s land, neither moving to pressure the ball nor dropping to defend the wide runner, Gonzalo “Pity” Martinez. 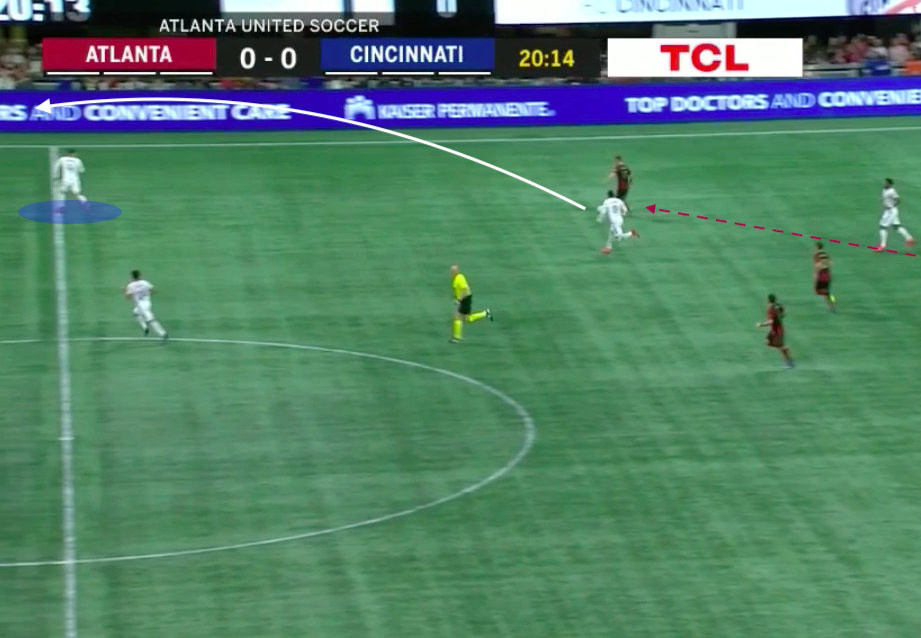 Martinez received the ball down the touchline, putting him into a 1v1 situation with Kendall Waston. With two runners in the box, but two defenders back in transition, FCC looked to be fairly positioned to defend. 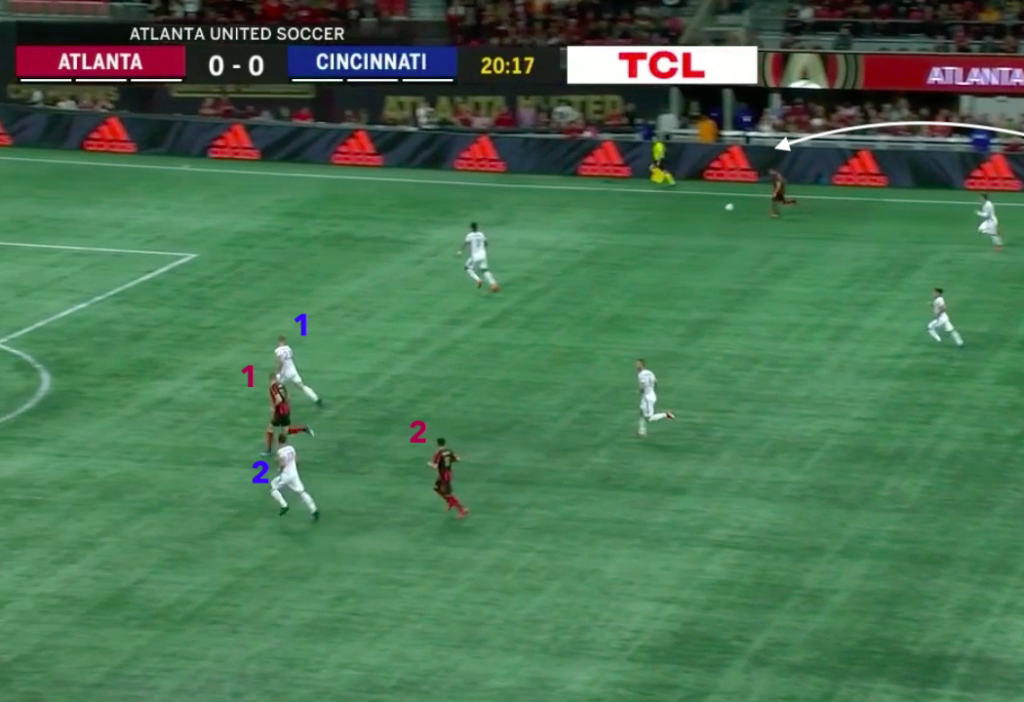 Waston did admirably, pushing Martinez to the goal line and forcing a cross from deep. Maikel van der Werff bodied up to Adam Jahn (blue), eliminating him as an option. However, Ezequiel Barco easily ran ball side of Mathieu Deplagne (red) and bundled the ball into the back of the net. 1-0 Atlanta United.

The lead up to the second Atlanta United goal was similar to the first, in that Garza (highlight) once again got caught forward in transition. This time it was Barco running in behind with Frankie Amaya in pursuit. 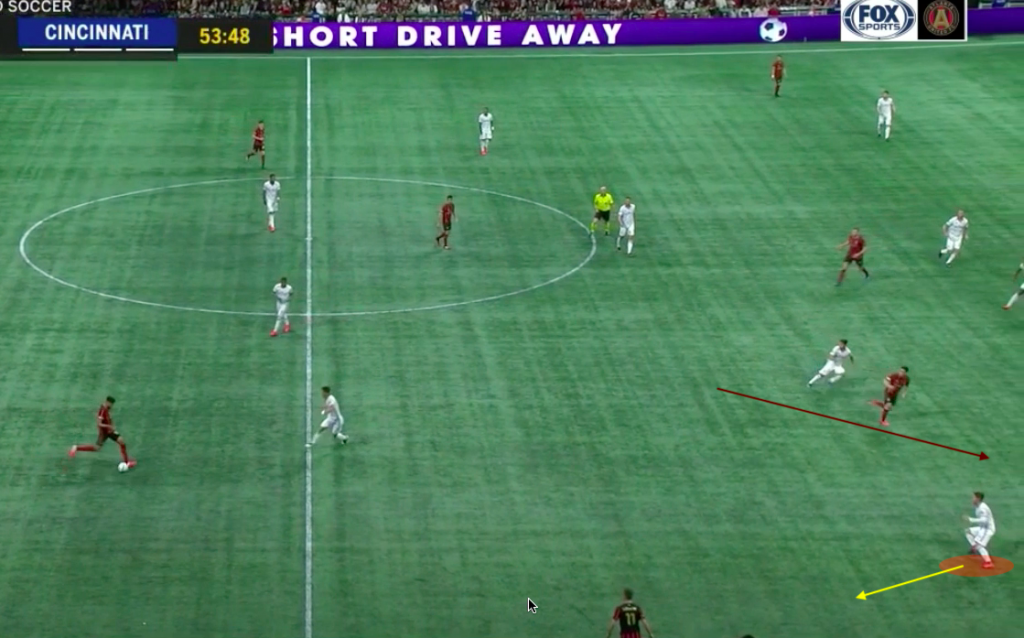 Barco cut the ball back, leaving Amaya in his wake and Garza to chase. He dribbled all the way across the field with Garza in pursuit before giving the ball up to left wing-back Jake Mulraney. Mulraney then cycled the ball back out to Martinez, and FCC had numbers up in the area with all Atlanta United players accounted for. Having tracked all the way across the pitch, Garza (highlight) ended up briefly marking Emerson Hyndman. 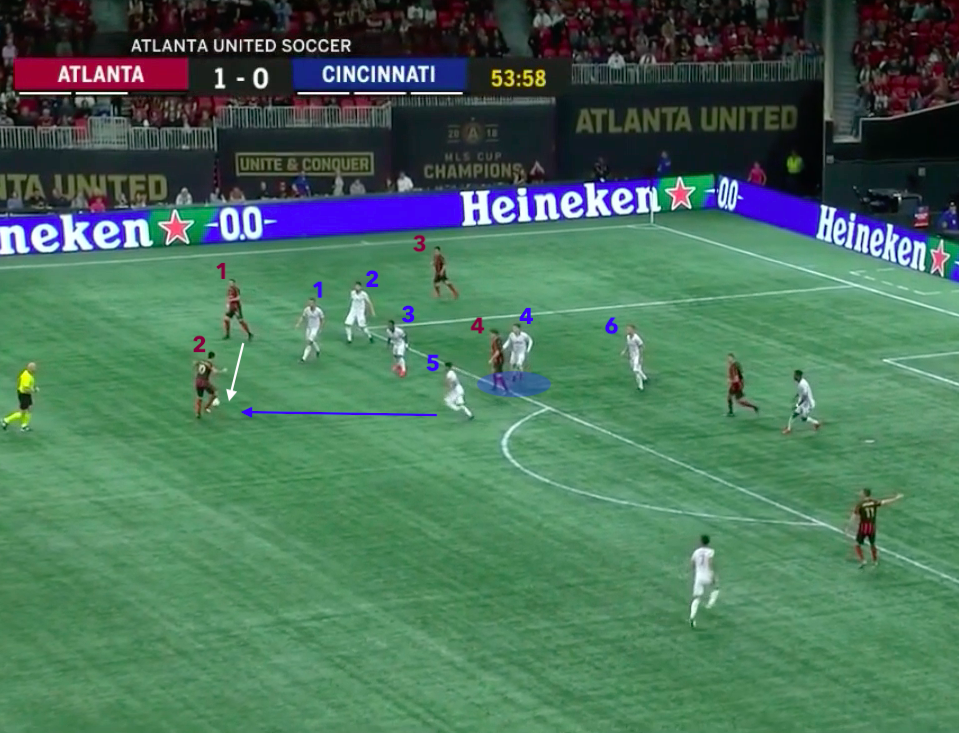 Amaya charged to pressure Martinez, who moved the ball wide to Barco. As Hyndman (red) moved to become an option, Garza failed to follow him. 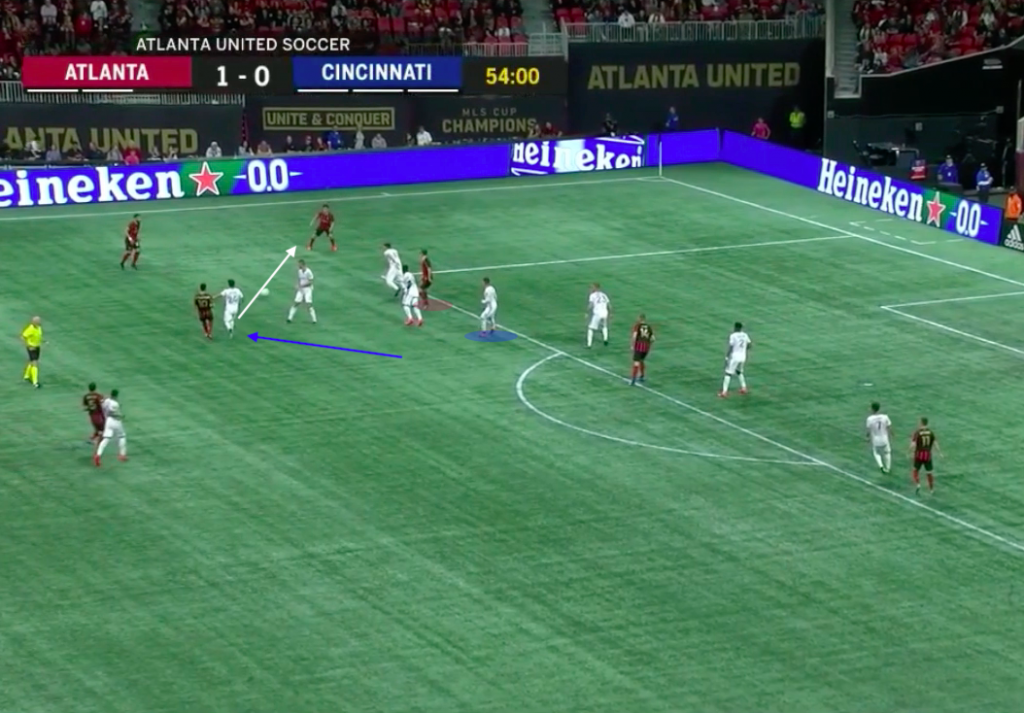 What happened next was inexplicable. Garza decided he was surplus to requirements during this defensive sequence and began to run away from the ball in the direction of his left-back position. At last check with Hyndman being marked by Garza, Gyau and Haris Mednunjanin were no longer aware of the midfielder, who was suddenly in all kinds of space. 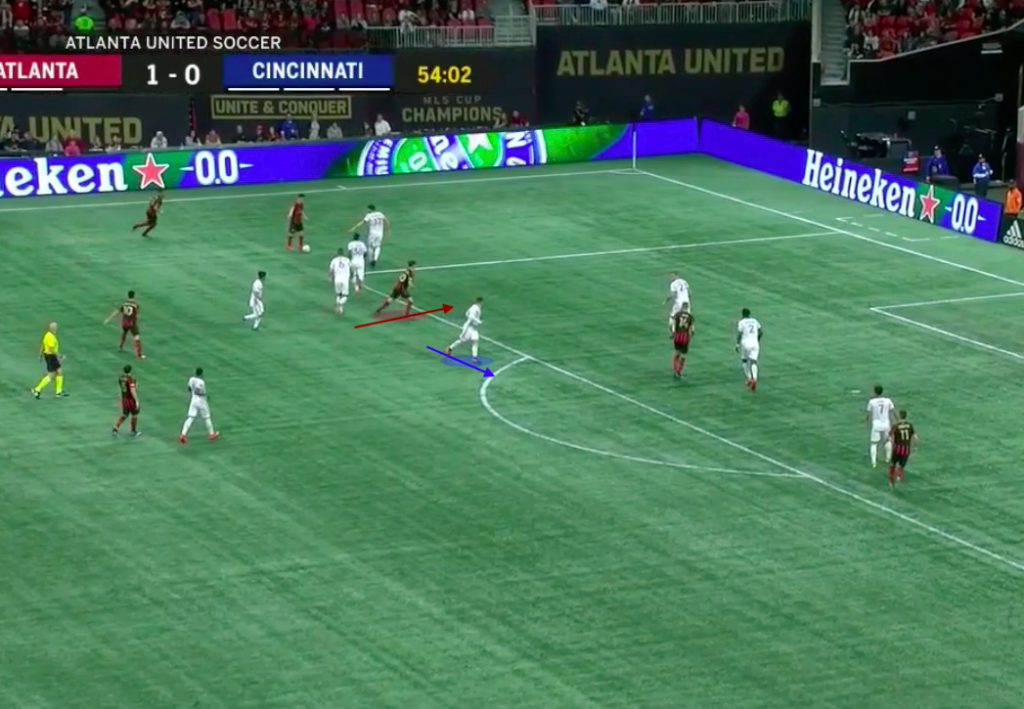 Barco slipped the ball into Hyndman, who wasted no time turning and slotting the ball in at the near post before van der Werff could close him down. 2-0 Atlanta United 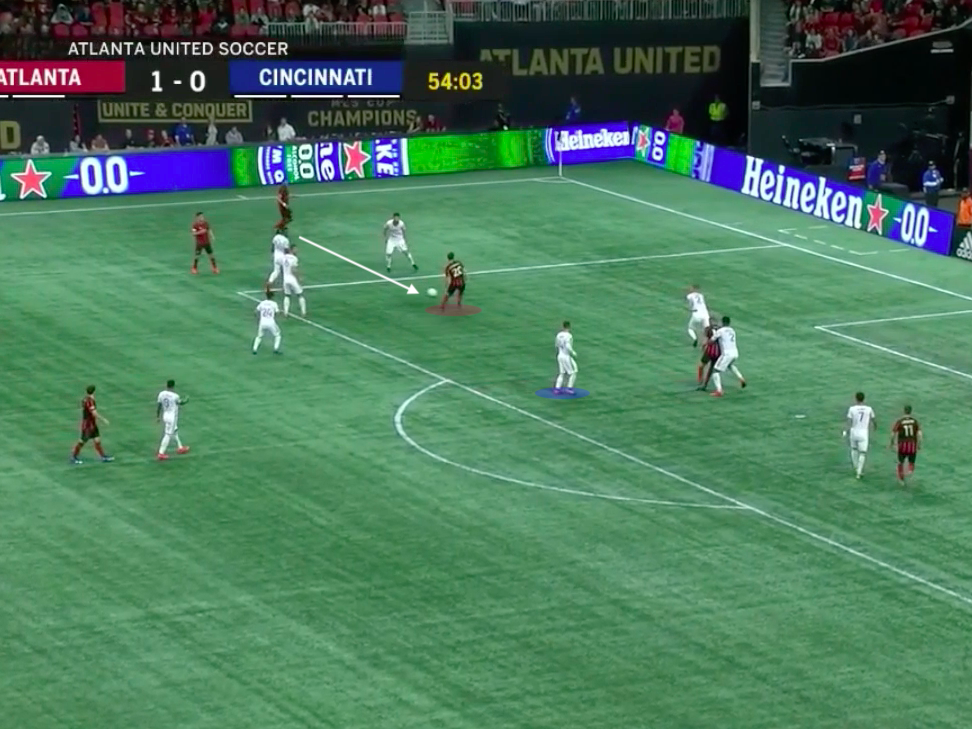 The positional interchange present for Yuya Kubo’s wonder goal was a thing of beauty. The 13-pass sequence began with Waston finding Garza on the left flank. Yuya Kubo had checked short creating space for Allan Cruz to run into. 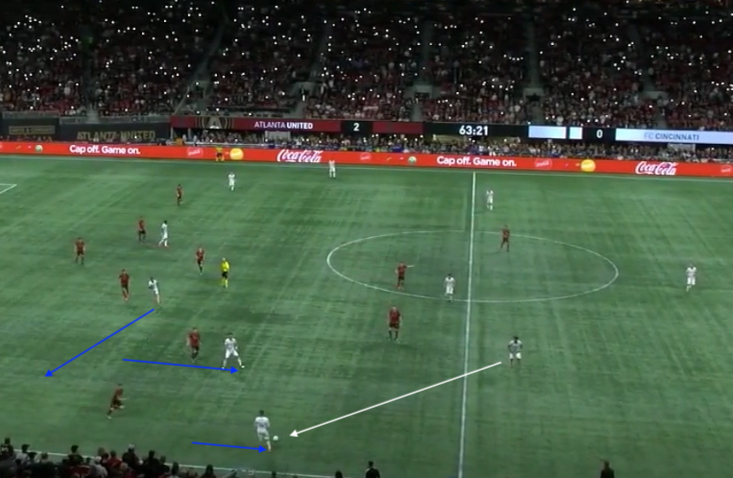 Garza gave the ball back to Waston and curled his run. Waston found Cruz behind the midfield line, and Kubo (blue) and Garza were off to the races transitioning into the final third. A clever backheel from Cruz released Kubo into the corner. 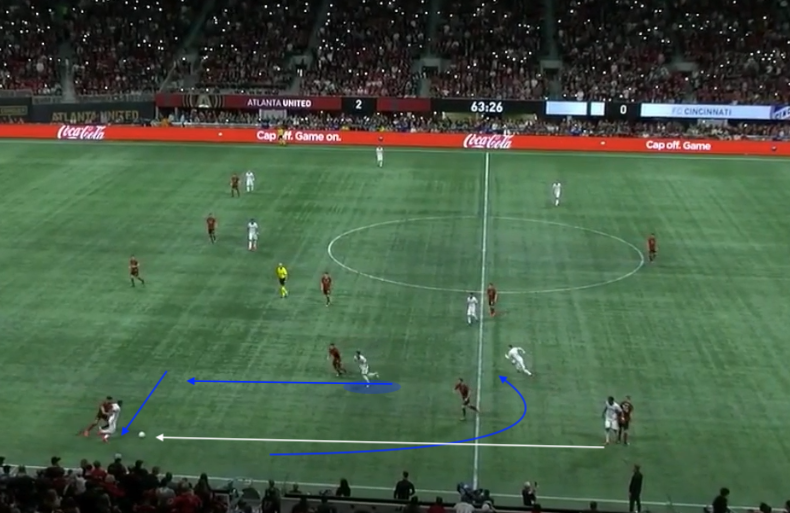 Kubo pulled the ball back to Cruz at the top of the box, and the Costa Rican played a ball toward Jürgen Locadia on the right. With Locadia pulled out of the center, Adrien Regattin (green) made a darting run in behind pulling the Atlanta left wing-back with him and creating space for the forward. 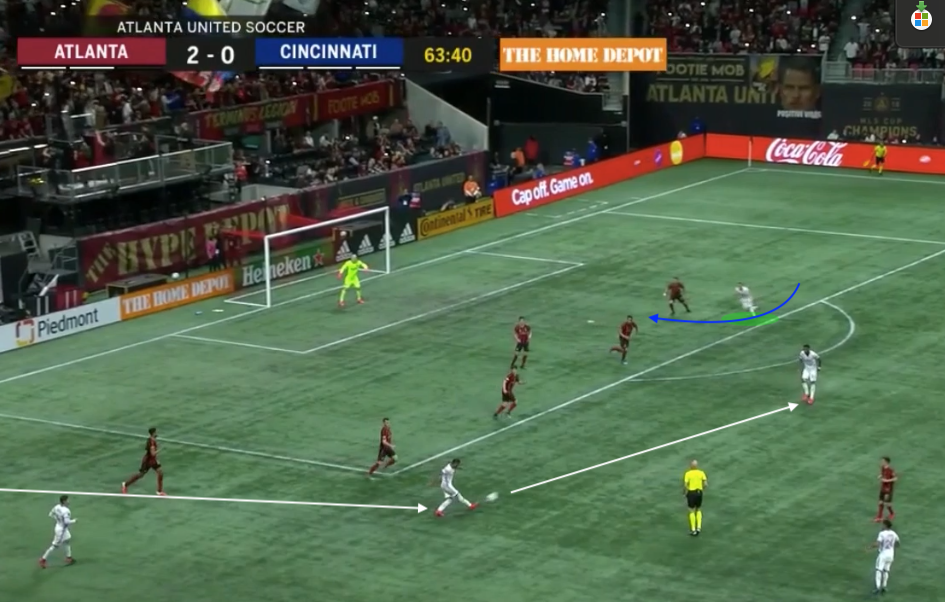 Locadia left the ball to Medunjanin and made a run toward the right-hand corner pulling with him a center back. This allowed Regattin to pop out into zone 14 with space for Medunjanin to find him. All the while Kubo began making his way into a more dangerous position at the top of the box.

Regattin found Kubo at the left edge of zone 14. Then the stagnancy that so often plagued FCC last season became an afterthought as Garza burst forward, providing an option on the left and causing the Atlanta right back to freeze, worried about the wide runner. Regattin continued his run across the front of Kubo, momentarily screening the goalkeeper and allowing Kubo to cut inside. 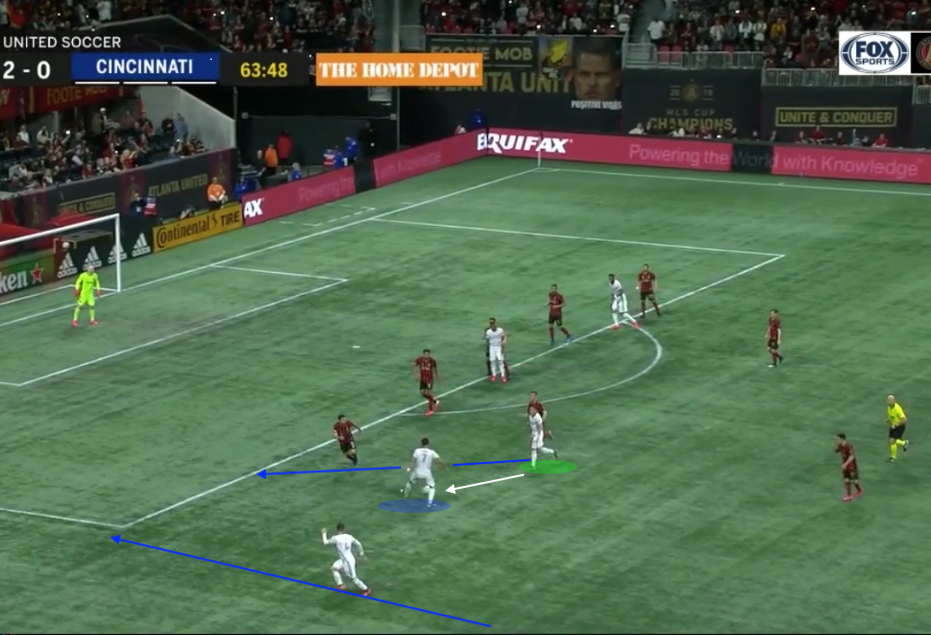 All of the positional interchange and constant movement of the FC Cincinnati team resulted in Kubo having acres of space to hit his shot — and hit it he did. 2-1 Atlanta United. 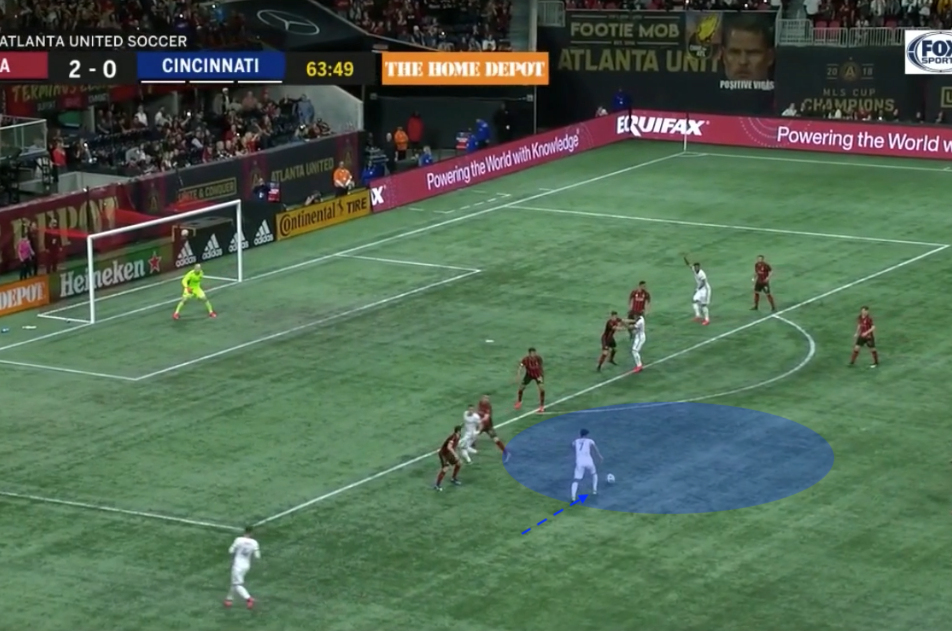 Zero points through two matches is a less than ideal start for the Orange and Blue. However, this team has undeniably been fun to watch. The movement on offense, chances created and fight shown by this team should be enough to give fans considerable hope heading into the home opener on Saturday.