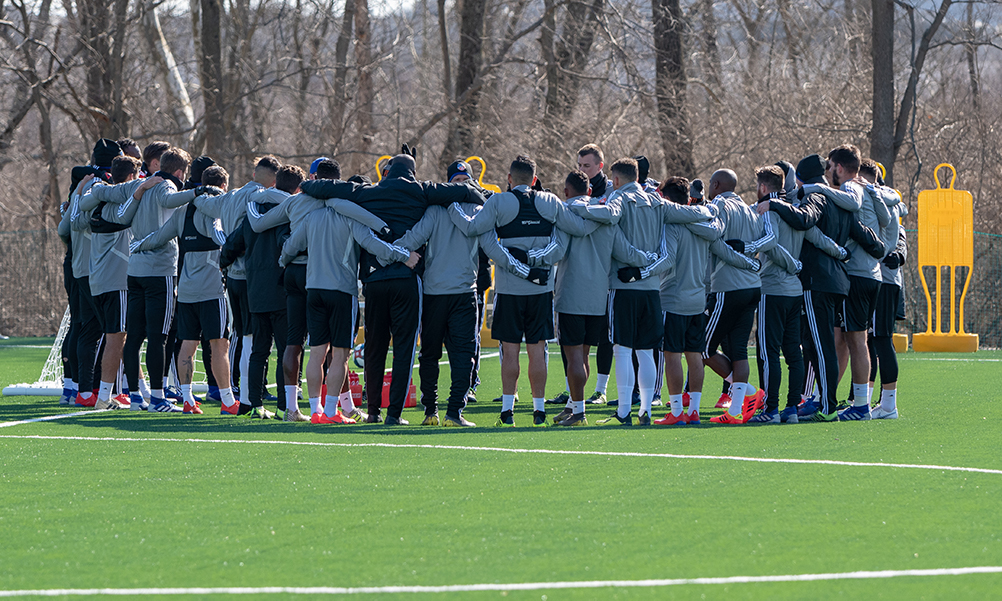 Here are our player ratings for FC Cincinnati’s 3-2 loss to the New York Red Bulls in Sunday’s season opener.

FC Cincinnati scored two second-half goals, but it wasn’t enough as it dropped its season opener 3-2 at New York Red Bulls. Allan Cruz was first to get on the board for FC Cincinnati, and Jurgen Locadia came off the bench to net in his debut. Now on to the Player Ratings!

All three goals came on the counter, so it’s tough to place the blame on Richey but he was clearly off with his distribution. His 50/50 clearance to Yuya Kubo was turned quickly the other way for the second NYRB goal. With FC Cincinnati vulnerable to turnovers in the midfield, Richey has to do better clearing the ball.

Garza had a first half to forget Sunday. He couldn’t quite figure out when to get forward or when to stay back on defense. He pinched in a little too centrally on the first goal, leaving his back post exposed. Kubo didn’t help matters, as he failed to trackback. Garza had a better second half getting forward as the Red Bulls ran out of steam. His chip to Brandon Vazquez set up the opener for FC Cincinnati. There were some good moments to build off of, and you’d like to see how he responds next week at Atlanta.

Waston wore the armband in New York for the Orange and Blue. He and Maikel van der Werff were under pressure all game from the counter-attack. Turnovers did the centerback pairing little favors, but they need to figure out their spacing both between themselves and the fullbacks along with the midfield. Especially in the first half, there was too much space as the Red Bulls were inviting FC Cincinnati to make a mistake with the ball.

What I said about Waston applies a lot to van der Werff. There were spacing issues all over the backline, and too many mistakes were made with the ball. You would expect van der Werff to make a play to stop Daniel Royer in the box on the third goal, but he whiffed on what ended up being the clinching goal.

A sloppy night for the right back. He was caught flat-footed on the second NYRB goal after reacting too slowly in the buildup, leaving an easy chance for Kaku to put in goal. Deplagne was also caught too high up the pitch on the third goal, allowing Royer to get in behind him on the backside of the goal. FC Cincinnati is still coming together and learning each other’s tendencies. Deplagne is experienced and needs to be more aware of the buildup around him. Allowing Royer to get behind him and then fail to track back quickly enough is inexcusable.

It was a quiet day for Medunjanin. He was limited to sitting in front of the back four and even slid in as a third CB at times with both fullbacks went forward. Most of his passes went side to side or shuttled to Frankie Amaya to progress up the field. He could’ve helped trackback for Royer’s goal along with Deplagne. It looked as if they were both waiting for the other to go and in the end, neither did.

I liked a lot of what I saw in the match for Frankie Amaya. He was consistently around the ball and made several key turnovers. He helped spring Locadia’s goal and got into the attack more than last season. While it’s likely Siem de Jong supplants the former first pick in the starting XI, interim coach Yoann Damet has to appreciate his grit and work rate.

Cruz continues to show up at the right time in front of the goal for Cincinnati. After a tough first half where the midfield was overrun at will, Cruz got forward more with follow up runs into the box. I liked his interchanges with Locadia and Adrien Regattin. While I don’t expect Cruz to lead the team in goals again, the way the club will work off the forward, I could see plenty of follow up opportunities in the box.

Out of all the players making their debut for FC Cincinnati, Yuya Kubo’s was the most disappointing. He failed to track back on defense enough to stop Kyle Duncan’s opener and lost a 50/50 ball from Richey leading to the second goal. I’m not going to be too hard on him offensively because it looks as if he’s still assimilating into the club. He’ll need to figure out his defensive responsibilities with Garza. If both continue to get forward, they are leaving a lot of room behind them for an opposing player to sit.

While he failed to impact the scoreline, I liked a lot of what I saw from Regattin. I liked the moxie he displayed taking the free kick towards the end of the second half over Medunjanin. He’s not afraid to try and make things happen offensively and had some nice interplay with Allan Cruz. Count me intrigued as a guy who didn’t know much about Regattin before he got to the club.

Quiet first half, but he rebounded quickly a minute into the second half, creating the goal for Cruz. Vazquez made a great run in space behind the NYRB backline off a long ball. He held the ball up just enough on the dribble to bring Cruz into the play and hit a great pass in front of goal for the assist. Outside of the goal, he wasn’t involved much as FC Cincinnati struggled with meaningful possession. His hold up play improved as the match progressed.

It didn’t take Locadia long to show why the club wanted to bring him in scoring in his debut match. While his goal will get most of the news, it was his play before moments before that has me optimistic. He caused problems changing up his runs between and in front of the NYRB backline. The different looks switching from a target man to dropping deeper off the right side of the box caused confusion for the Red Bull center backs, and he almost found the goal twice before getting on the board in the 83rd minute. Locadia has practiced sparingly with the club, and it will be interesting to see how fast he can come up to speed and build relationships with the rest of the squad.

Manneh was a late sub for Yuya Kubo. He came in on the right, switching Regattin to the left. His speed caused some confusion, but he was only able to get on the ball twice and didn’t have much of an impact on the match.

Gutman came in for Greg Garza at left back. In his brief time, he worked with Regattin up the left side.