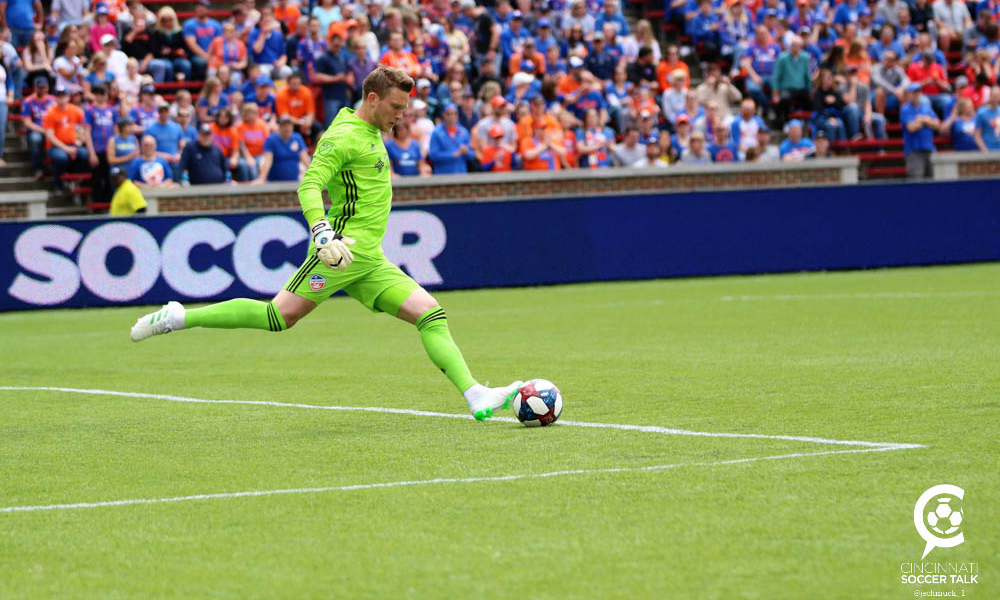 MASON — As FC Cincinnati prepares for its 2020 MLS season opener Sunday at the New York Red Bulls, one of its goalkeepers will bring a valuable experience in tow.

Spencer Richey spent 10 days in London during the offseason training with Premier League side Crystal Palace. The trip was a product of Richey’s desire to get an offseason boost and goalkeeper coach Jack Stern’s connections.

“England was an easy choice just with their history of producing world-class goalkeepers, and obviously Jack has a lot of connections there,” Richey said Monday at FC Cincinnati’s media day at the Marriott Cincinnati Northeast in Mason.

The trip also extends the relationship between the two sides. Crystal Palace visited Nippert Stadium for an international friendly in 2016 in FC Cincinnati’s first USL season.

The daily routine in Palace’s training sessions is not that different from what FC Cincinnati goes through at the Mercy Health Training Center, Richey said. Hodgson did let Richey sit in on Palace’s scouting of Leicester City in preparation for their Nov. 3 fixture.

“Their grounds are one of the older (sites),” Richey said of Selhurst. “It hasn’t had the big, fancy renovation jobs. It was super, super cool. Totally packed, great atmosphere. Unfortunately they lost the game, but Leicester’s having a pretty damn good year.”

What stood out for Richey was when Palace strikers Christian Benteke and Wilfried Zaha took on the goalkeeping corps in training.

“The pace that the ball moves that they strike it with — the precision — that was something that I noticed straightaway as a different class,” Richey said.

While Richey acknowledges there aren’t too many Bentekes and Zahas in MLS, there are several quality strikers around. Taking on strikers of that level, if only for a week or two, can translate into seeing the game differently this season, he said.

“Just the exposure to some of that from my reactions and my coordination and my eye seeing a next-level pace of the game always helps slow it down a bit in this environment,” Richey said.

Richey missed the final 12 games last season with a back injury but started 19 matches with two clean sheets. He stopped 61 of 106 shots he faced. Przemyslaw Tyton had three clean sheets and saved 32 of 62 shots in 15 appearances.

The two have a healthy professional relationship, Richey said.

“The goalkeeping unit is a funny thing,” Richey said. “It really is. You want to have a positive training environment and you’re in such a small group all the time. And we do have that. Titi and I get along well. We’re not hanging out every weekend after the game, but we certainly have a respectful and professional relationship. He’s a good goalkeeper, and it helps us both improve.”