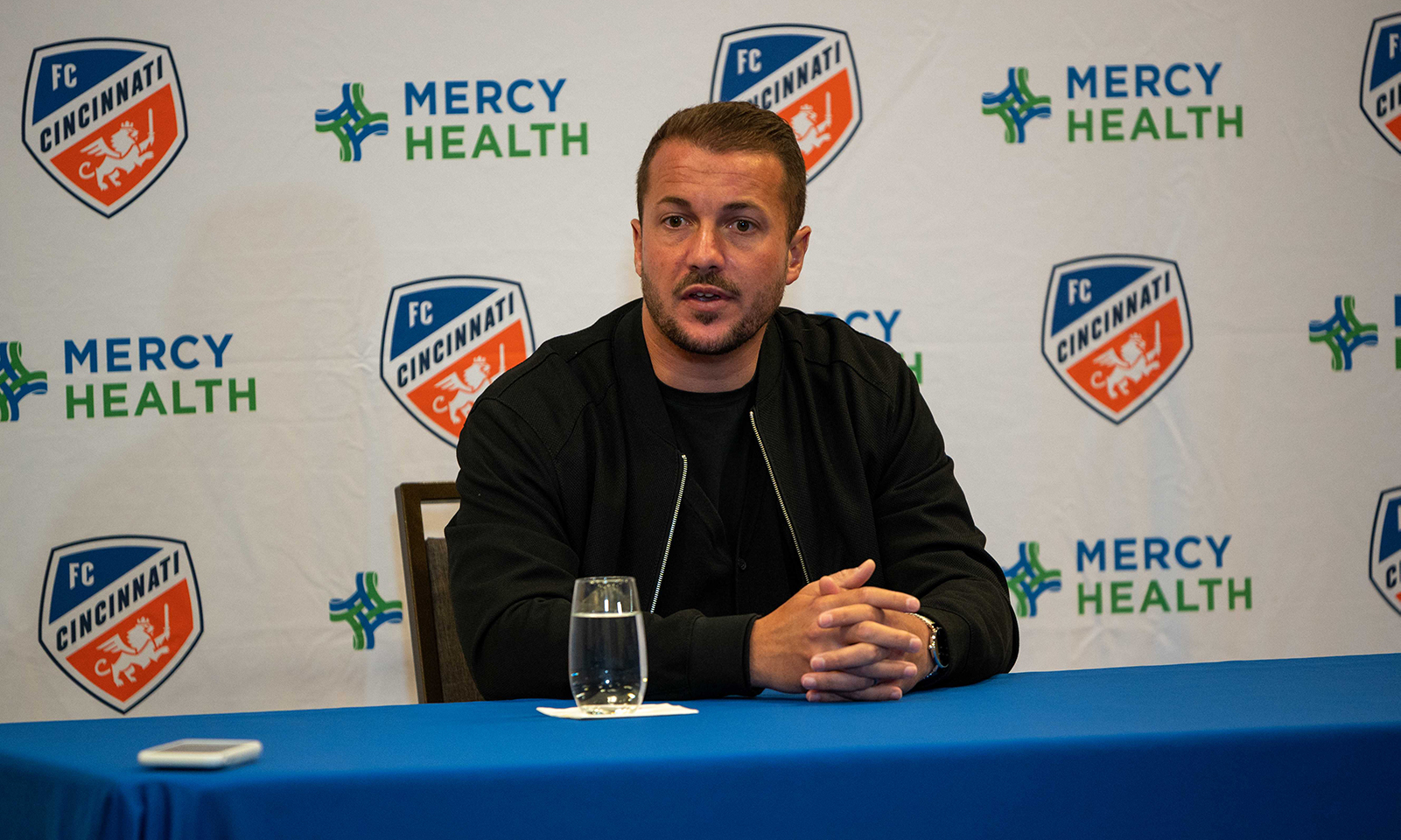 MASON — As general manager Gerard Nijkamp proceeds with FC Cincinnati’s coaching search to replace Ron Jans, the players are putting news of Jans’ resignation behind them and focusing on Sunday’s 1 p.m. MLS season opener at the New York Red Bulls.

Jans resigned Feb. 17 after an investigation into him using a racial slur. He left while the club was training at the IMG Academy in Bradenton, Fla., less than two weeks before the start of the season.

The move was a distraction, interim coach Yoann Damet acknowledged Monday at the team’s media day at the Marriott Cincinnati Northeast in Mason.

“It’s impossible to say that it wasn’t a distraction,” Damet said. “That affected everyone, players and staff. That had an impact on all of us. Now it’s time to look forward, and I think the players have made a step in the right direction.”

Cincinnati Soccer Talk spoke with several players about the status of the locker room. To a man, they say the news was startling when it broke. But after a team meeting in Florida, the matter is at rest. It’s now time to focus on the MLS season.

“We left it all in Florida,” midfielder Haris Medunjanin said. “We spoke with the team, and if somebody wants to say something (at that time, in Florida), they should say it. Nobody said anything, so we left everything there. Now we can get focused on the first game against the Red Bulls.”

One of the biggest obstacles in the lead-in to Sunday’s opener is having the newest foreign-born additions scattered literally around the world trying to have their work visas processed.

Siem de Jong’s status is a little more uncertain. He might be back in time for the second game in Atlanta on March 7, but a better bet is the home opener against D.C. United on March 14.

Once all the pieces are in place, Damet said they should fit into the club’s system quickly.

“The first thing is all these players are experienced players,” Damet said. “They’ve been in that situation before. They know how to deal with it. For sure it’s going to take some time for them to adapt to what we want to do as a team. They will have to understand what is the plan. I expect them to be integrated very, very quickly.”

Joseph Claude-Gyau is the only player with injury concerns, Nijkamp said  He has been working on the side and might get into regular training later this week.

The club has yet to select a team captain, and Damet still must decide on a starting goalkeeper. Both Spencer Richey and Przemyslaw Tyton had impressive stretches as the primary shot stopper last season.

Behind the scenes, Nijkamp is searching for Jans’ replacement.

Nijkamp was in New York over the weekend but said it was to spend time with his wife, quashing rumors that he was interviewing a prospective coaching hire.

Nijkamp does not have a definitive timeline for securing a new coach, saying he can take a few extra weeks if necessary with the confidence in Damet as caretaker as he was last season after Alan Koch was fired.

“In the number of head coaches, there are enough (candidates),” Nijkamp said. “A lot of coaches want to be coach of FC Cincinnati, so that’s the good news. But to find the right profile needed for this roster, that’s another challenge.

“It’s always important to see not only if the new head coach of FC Cincinnati is a correct fit on the pitch — tactical and mental — but also off the pitch.”

Whoever the next coach is, he will not be in a position to suggest roster moves, Nijkamp said. He indicated the roster as it now stands will largely be intact when the club moves to the new West End Stadium next year.

“We have this roster in place,” Nijkamp said. “The coach is very important to advise me. … But he has to work with this roster. I believe in this roster. My team believes in this roster. … We will not change that by adding a new coach and starting from scratch again.”

That hire could even be internal.

If the results are convincing enough with Damet at the helm temporarily, Nijkamp on Monday did not rule out Damet becoming the permanent head coach.