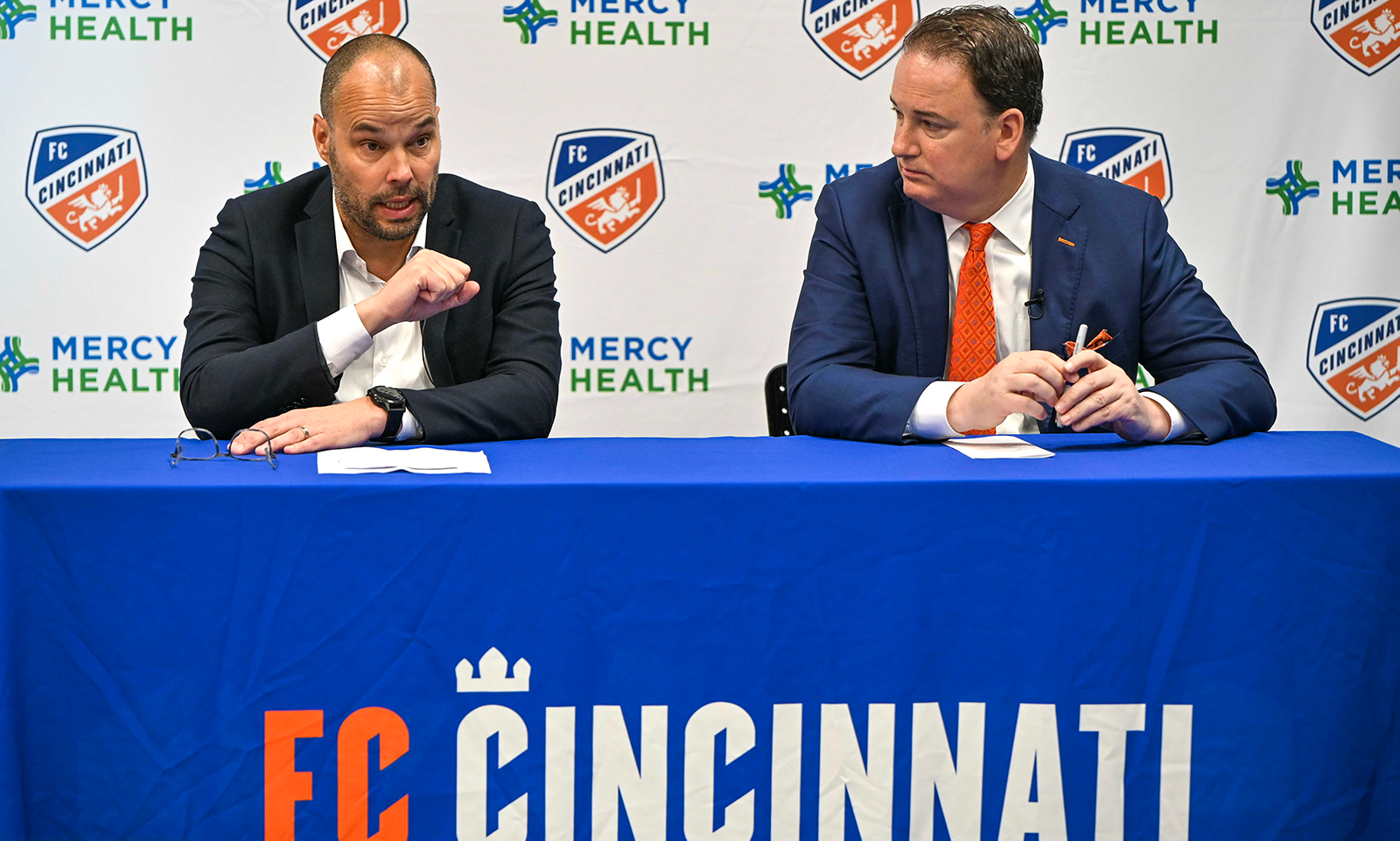 FC Cincinnati has some repairing to do after an investigation into Ron Jans’ racial slur concluded it was not an isolated incident as the club’s coach. Jans’ resignation was announced on Tuesday.

FC Cincinnati president Jeff Berding said the team’s investigation was swift and the response decisive. Now, the MLS franchise that once was considered the Cinderella story in American soccer has an image to repair. The glass slipper no longer fits.

Throughout a Tuesday afternoon fraught with damage control, Berding and general manager Gerard Nijkamp fielded a barrage of questions about the resignation of coach Ron Jans, the pattern of behavior that led to his ouster, concerns about the club’s dressing room culture and where the club goes from here.

“Let me be clear, racial and cultural diversity is a big part of what makes the game of soccer so special and we place the highest priority in respecting every person involved in our game,” Berding said. “There’s no place for racism or intolerance in any form”

FCC deserves credit for taking quick action after a complaint was filed with the MLS players association on Thursday accusing Jans of uttering a racial epithet.

Within hours, Berding says, an investigation was launched. Jans admitted to the racial slur and was removed from the club’s spring training facility in IMG Academy in Florida pending the investigation.

Player interviews were conducted Sunday and concluded by Monday. What the players described wasn’t a moment of poor judgement while quoting a hip-hop lyric, which Jans claimed, but rather a much larger issue which dated to last season.

“The findings concluded this was not a single incident but included broader themes that were insensitive and inappropriate,” said Berding.

Jans resigned his position late Monday evening. Yoann Damet took over as interim manager for the second time in less than a year.

As part of an agreement with the players involved, no specific details were given regarding the investigation, exactly how many incidents were a part of the complaint against Jans or the nature of them.

Most FCC players remained mum on the subject. One noteworthy exception was Dutch defender Maikel van der Werff who on Tuesday told a Netherlands TV talk show, “There is anger and disappointment in the players’ group. Ron did not deserve this.”

At least one player or a group of players disagreed enough with van der Werff’s assertion that they took their concerns about Jans to the MLS Players Association. The fact that the players don’t seem to be unified on the subject and that those concerned chose to go to the MLSPA first rather than through internal club channels might signify a broader issue.

“I certainly hope that in the future there’s some trust in the locker room — that we can talk about these issues and become better at discussing the issues as they are occurring,” Berding said.

Racism has become a growing issue in world football, particularly in Europe where players often are subject to racial taunts. Just this week in Portugal, FC Porto striker Moussa Marega left the pitch during his club’s 2-1 win over Vitoria Guimaraes after Vitoria fans directed monkey noises at him after he scored a goal. Premier League clubs in England supported a ‘No Room for Racism’ campaign this season.

“There are hateful incidents in soccer stadiums around the globe, and there’s no place for it,” Berding said. “We must all speak with a strong voice against intolerance and racism.”

FCC spoke with a strong voice with its rapid removal of Jans. But is it enough? It’s fair to question why it took so long for the club to take action on what apparently was a pattern of poor behavior by Jans or why there wasn’t proper vetting before Jans was hired last August which might have uncovered these tendencies.

From a public relations standpoint, the Jans incidents could undo some of the great work FCC has done in the West End, which is home to its new stadium set to open in 2021. The club has gone to great lengths to earn the trust of the predominantly black, low-income community, investing millions of dollars and creating economic opportunities through the club’s foundation.

“Our commitment to the West End is exceptionally strong,” Berding said. “We’re going to continue to work very hard in making a difference in the West End and the broader Cincinnati community.”

Then of course, there’s the soccer aspect to this. Since last season, Jans and his staff have worked to establish a style of play. Nijkamp has built a roster that is designed for Jans’ system. The club has strengthened its backline and added attacking talent like Japanese international Yuya Kubo and Dutch forward Jurgen Locadia.

But Jans’ ouster and the reasons behind it have cast a shroud over what has been a mostly positive offseason for FCC coming off a historically bad inaugural MLS campaign. While an international search gets underway for FCC’s third permanent head coach in less than two MLS seasons, Damet and his staff need to prevent the club from fracturing before the season kicks off March 1 at Red Bull Arena.

Nijkamp offered Damet a vote of confidence on Tuesday, saying he expects a seamless transition.

“The only thing at this moment that I can be sure of is that will be happening,” Nijkamp said. “We are very convinced that Yoann with his staff will continue the hard work that already had been done. The group has to grow together again to trust each other in the locker room so we can reach our goals.”

There’s a lot of work to be done by FCC to earn back the trust of the fans and this community, not to mention its players. If this was just the actions of one man and not an indicator of a club culture gone awry, then perhaps this incident will pass with the first Locadia goal in front of a packed house at Nippert Stadium.

FCC plays its final preseason match on Friday against Icelandic squad KR Reykjavik before returning to Cincinnati to begin preparations for the regular season.

“This is certainly painful,” Berding said, of Tuesday’s events. “What came out was alarming. Clearly there were unacceptable things occurring.”