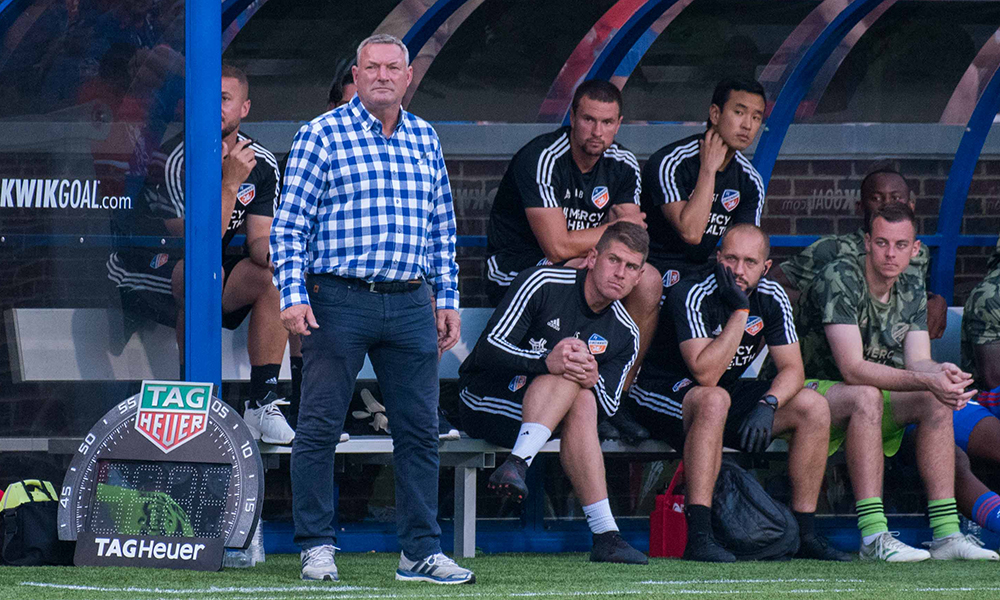 FC Cincinnati coach Ron Jans has stepped away from the team after allegedly using a racial slur in an MLS Players Association complaint to the league. Jans will not coach until a dual investigation by the club and the league is complete.

FC Cincinnati coach Ron Jans has stepped away from the club after allegedly using a racial slur, according to a report Friday by the Cincinnati Enquirer’s Pat Brennan and Sharon Coolidge.

In a separate incident, the complaint alleges Jans made inappropriate remarks about slavery while the team was touring national memorials in Washington before last year’s game at DC United on Oct. 6, according to the Enquirer.

“I have a lot of hip hop songs in my playlist,” Jans told Dutch media outlet Algemeen Dagblad. “But I didn’t know the song that was being played in the dressing room. I don’t feel guilty. Because I am not a racist. What I have done is somewhat awkward in America. But between a clumsy action and what is happening now — that is incomprehensible. I think it’s really a shame, because I’m really enjoying myself in America. This whole situation just feels so strange. ”

FC Cincinnati and MLS are investigating the allegations, according to an MLS statement, and Jans has stepped away from his coaching duties while the investigation is ongoing. Assistant coaches Yoann Damet and Ivar van Dinteren will head the club, according to the Enquirer.

The investigation’s outcome is expected on Sunday, according to Algemeen Dagblad.

“When club leadership was made aware of the allegation, we were very surprised as building a caring and committed culture has been a focus of Ron’s leadership,” FC Cincinnati said Friday in a media statement. “We want to fully understand the nature of the incident and allow for an environment for our players to speak freely to any locker room issues. Therefore, while both the club and Major League Soccer work together, Ron will step away from the team during the investigation.

Jans told Algemeen Dagblad, “Really, I hate slavery, discrimination and racism. If I can help fight that in society, then I really like to participate. I have visited the Apartheid Museum, watched and read many films and books on this subject.”

It will mark the second time in less than a year that Damet will take over coaching responsibilities on a temporary basis. He was named interim coach after Alan Koch was fired last May.

The complaint comes as Jans was wrapping up his first preseason with the club. FC Cincinnati plays Nashville SC in a preseason friendly Sunday and has split-squad scrimmages with Sarasota Metropolis FC and KR Reykjavik on Feb. 21 the IMG Academy in Bradenton, Florida. The season opener at the New York Red Bulls is March 1, just 16 days away.