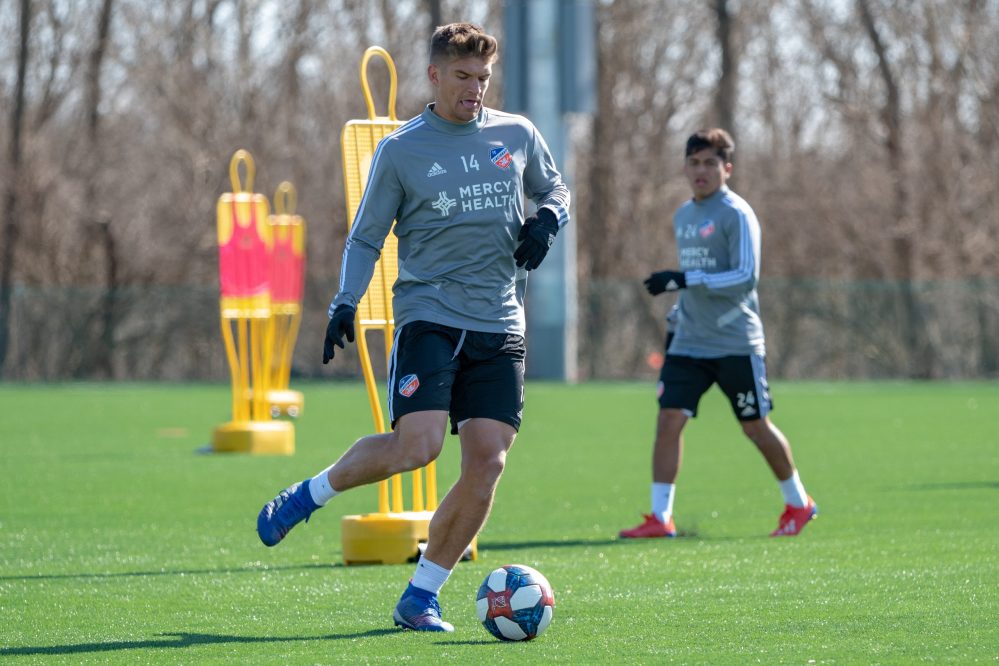 Jans spoke by phone on Monday from IMG Academy in Bradenton, Fla. where the second leg of preseason training is underway.

Ron Jans has a vision for Jimmy McLaughlin this season, and might be the stuff of dreams for FC Cincinnati fans.

“I try to visualize we are playing at Nippert Stadium and it’s the 75th minute,” Jans said. “Already the fans are cheering Jimmy and he’s giving so much energy to the team, and then he’s scoring the winning goal.”

McLaughlin cleared his biggest hurdle on Friday, which was to earn himself a contract with FCC for the 2020 season. Now it’s a matter of getting fit coming off a significant ACL injury and finding his role on the team.

Jans said it’s too early to define Jimmy’s role on the squad, but once the midfielder is fully fit, he suggested that anything’s possible.

“An ACL is a really bad injury,” Jans said. “He’s getting stronger. When everything is alright, he can compete with the other attackers to be a starting player.”

Jans spoke by phone on Monday from IMG Academy in Bradenton, Fla. where the second leg of preseason training is underway. FCC plays Philadelphia Union on Wednesday at IMG’s Soccer Complex, then faces Nashville on Sunday.

FCC’s high-profile new additions Jurgen Locadia and Adrien Regattin have arrived in Florida and are now training, but not with the group. Both players were still waiting to finalize their work visas which is expected to happen soon.

“First they have to pass the immigration process,” Jans said. “They are on trial right now. They’re training. Not training with the group all the time. The first sessions they had last week in Cincinnati with trainers, they worked so hard. We met them, I had dinner with the two players. And now they are into the group.”

Locadia made 11 appearances while on loan at Hoffenheim this season, and although Regattin has not played since making 23 appearances for Akhisarspor last year, he also appears to be very fit, according to Jans. As a result, neither player might need the full preseason to get fit, it’s more about getting them incorporated into the squad and into the system.

“The most important thing now is that they get to know the players, the staff, the way of working,” Jans said.

In terms of the rest of the squad’s health, things are looking up.

Jans said Swedish center back Tom Pettersson is back on the training pitch but not yet with the group. He could be back with the group by next week. The only other injury to speak of is a minor knock for defender Andrew Gutman who will not play against the Union but should be good to go by the weekend.

After just two training sessions in Florida, Jans plans to split groups of players into 45-minute increments, except for the goalkeeper who will go 90. Some players will play a lot longer on Sunday against Nashville.

“It was positive in Arizona,” Jans said. “The first two days we feel very at home here. The performances are much more important than the result.”