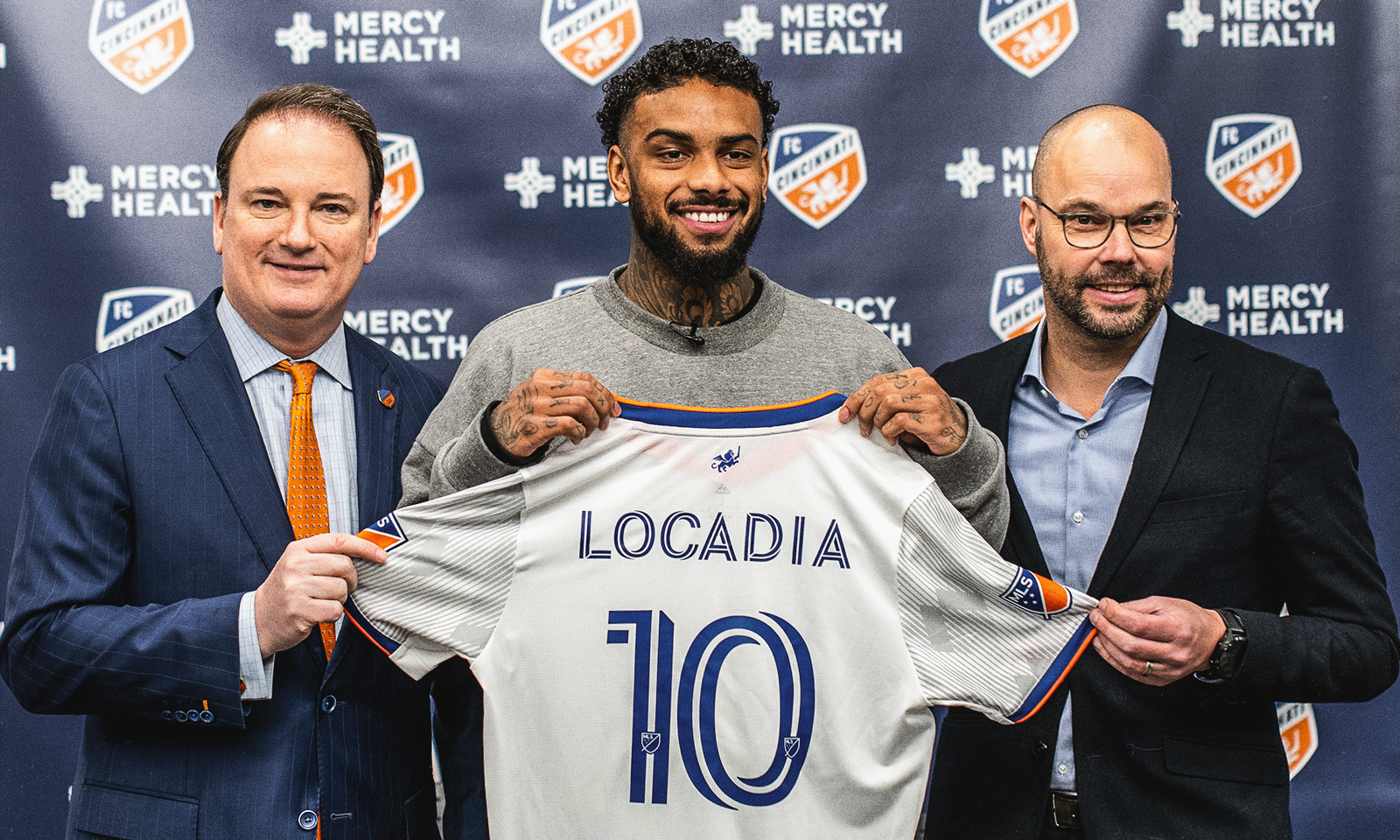 FC Cincinnati announced the signing Monday of designated player Jürgen Locadia to a five-month loan from English Premier League side Brighton and Hove Albion. The club has the option to make the move permanent during the summer transfer window.

It’s official. FC Cincinnati announced Monday the acquisition of Dutch forward Jürgen Locadia from Brighton and Hove Albion of the English Premier League. He will join the Orange and Blue as a designated player on a five-month loan. FCC has an option to make the move permanent during this summer’s transfer window.

The rumor mill picked up on the club’s interest in signing Locadia last week, and after a weekend filled with speculation, trending hashtags and an impromptu meet and greet at the airport Sunday, Locadia has passed his medical exam and signed on the dotted line. He will occupy an international spot on FCC’s 2020 roster and will wear No. 10.

“We are excited to bring in a proven forward in Jürgen to strengthen our attacking abilities,” FC Cincinnati general manager Gerard Nijkamp said in a media release. “He is a talented goalscorer in his prime, and we feel adding an impact player of his caliber will be a great addition to our club. We look forward to welcoming Jürgen to our club and city.”

Said Locadia in the media release, “I am looking forward to a new opportunity with FC Cincinnati. I want to try to help the team build new memories and be an important player for the team.”

This is a massive signing for the young MLS side, who have acted swiftly to overcome an abysmal first season. Locadia is the crown jewel in general manager Gerard Nijkamp’s roster rebuild and the highest profile signing to come to Cincinnati. There has been a lot of addition by subtraction — Fanendo Adi, Roland Lamah and Leonardo Bertone have all left the club after being three of the club’s top five earners last season. Locadia joins fellow new DP signee Yuya Kubo in the hopes of reinvigorating an offense that scored a league-low 31 goals in 2019.

“We try to design our roster in a way that all the pieces are coming together. Building the foundation on the back, the fundamentals. In the last couple of weeks, we tried to get these final pieces in impact players,” Nijkamp told reporters this morning. “Yuya Kubo was the first one and now Jürgen is the second player…And we are still looking for pieces who can help the team to become better in the 2020 season.”

Locadia, 26, spent the first half of the European season on loan in the Bundesliga, where he played for TSG Hoffenheim. He made 11 appearances for the German side, scoring four goals and an assist. He struggled to find playing time, however, once Hoffenheim returned from its winter break. Brighton and Hove Albion terminated his loan before the European transfer window closed Friday evening. This opened up the opportunity for him to join FCC.

Before his brief stint in Germany, Locadia was Brighton’s record signing. He transferred to the south coast of England for $18.7 million in the summer of 2017. During his three seasons in the Premier League, Locadia appeared in 43 matches, scoring six goals and adding two assists in all competitions.

But his professional career started at PSV Eindhoven in 2011, and he played there for seven years. At PSV, Locadia won the 2012 KNVB Cup, two Eredivise championships and two Dutch Super Cups. He’s also competed in both UEFA Champions League and UEFA Europa League matches. All in all, he scored 62 goals and recorded 39 assists in 176 appearances in all competitions for PSV.

Cincinnati Soccer Talk’s Brad Gough scouted the forward, and there’s a lot to be excited about. At 6-foot-2, 194 pounds, he is a physical target man who has a good touch and excellent movement. He’s fast and strong with good finishing and the ability to draw a lot of fouls. He fits well as the No. 9 in coach Ron Jans’ preferred 4-3-3 formation, but he can also play on the left-wing.

“What I can bring is a lot of power up front, I’m dynamic, I’m a type of player who can score goals. I can play as a winger, as a striker,” Locadia told reporters at his introductory press conference. “Why I decided to come here is because throughout my journey in Europe I’ve had ups and downs and I think I’m ready to play a lot of games and to be stable in my career. Cincinnati gives me this opportunity.”

While there may be more changes to FCC’s roster before it takes the field on March 1, this is the biggest signing of the offseason and arguably of FCC’s short history. The roster moves made by Nijkamp this winter have paved the way for Locadia by shedding big contracts, freeing up international spots and making room for another DP signing. FCC lacked quality finishing last season, and fans are desperate for a forward who can score a lot of goals. Now it’s up to Jans and his staff to help make Locadia successful in Cincinnati.